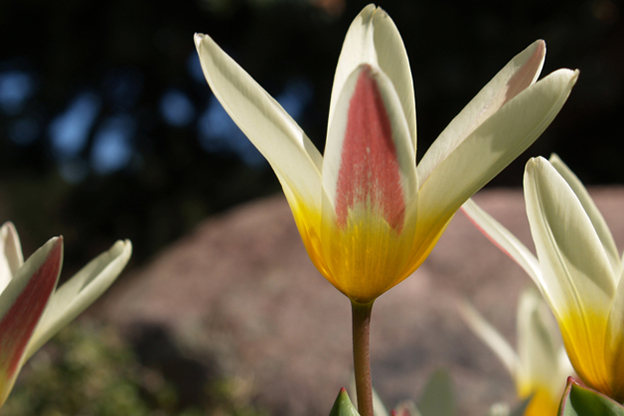 In the early 1900s, tulip growers realized the need for a classification system and so eventually the Classified List and International Register of Tulip Names was published by the Royal General Bulb Growers Association.

The tulips on this list that are the very earliest bloomers each year are referred to as the “Waterlily” tulips because of the shape of their flowers. They are classified as the Kaufmanniana type. They have short stems and large double flowers with slightly reflexed petals.

They are dependably perennial as long as no deer are around and combine well with early- and mid-season daffodils. When their flowers are fully open, the color at the base of the flowers is revealed and striking color combinations are seen. The foliage is short and sometimes mottled or striped and tolerates March’s sometimes cruel winds.

There are also taller, single early tulips that are used both for forcing indoors and for outdoor borders. They have sturdy 10-18 inch stems, and one of the most popular varieties is ‘Apricot Beauty’.

There are also exceptional double tulips that resemble peonies. These blooms are nice for forcing or for growing outdoors in beds, and the stems are only 8-12 inches high—so they are wind resistant and don’t flop over.

Another early-blooming type of tulip is the Greigi (gree gee eye). It has short stems, handsome foliage, and large rich colored blossoms. ‘Red Riding Hood’ is one especially popular variety.