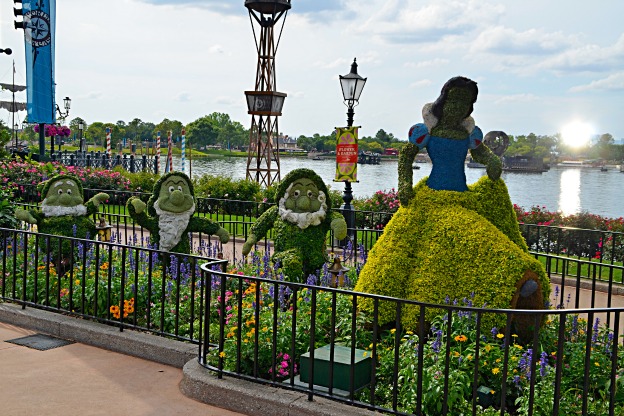 Shrub topiary, (which takes 3 to 10 years to produce), of much-loved Disney characters has now become synonymous with theme park landscaping. The art and science of the creation of these figures has evolved to the point where nowadays Disney employs a team of structural engineers to design the steel frames and heavy machinery operators to place the finished characters in place in park displays.

In 2014 alone, more than 100 topiaries were on display. Popular figures included Snow White and the seven dwarfs, Peter Pan, and the tallest character Goofy, at 14 feet.

After the tubular steel frames are built to guide the training and shaping of the plants, the frames are stuffed with moistened, unmilled sphagnum moss (wear gloves!). Then thousands of individual plant plugs are inserted into the moss. Vines such as creeping fig are pinned into the moss with hairpins or fern pins. The plants are misted with nutrients and water, and the plants are also trimmed and pinned weekly until the sphagnum is entirely covered and the figure has a living exterior.

The design and development of these lovable "green" characters is an intricate process and their expressive faces are especially endearing.