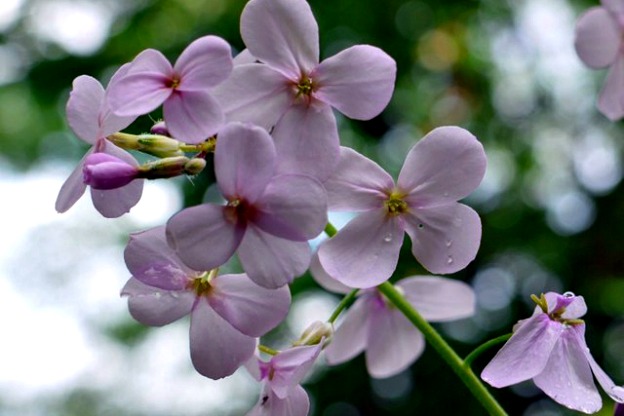 Hesperis matronalis is a native of Europe and was brought to North America as a garden flower. It has escaped and is now growing wild in North America from Newfoundland to Ontario, south to Georgia, Kansas and Kentucky.

It has a perfume that is noticeable only in the evening, and its genus name Hesperis means ‘evening'. "Matronalis" refers to the fact that women years ago admired this flower, and Marie Antoinette is said to have had bouquets of it smuggled to her in prison.

Unfortunately this pretty flower, that resembles phlox, is now on the list of invasive species in North America. It self seeds abundantly, and the flower heads are  most often white or lavender.

The 16th Century herbalist John Gerard noted that distilled water made with this flower was used to break a fever. The common name is Dame's rocket. and it has also been used as a remedy for scurvy. However, there is no scientific evidence that supports any medicinal benefits from this flowering plant.

Rocket blooms from May until it gets hot, and then it produces five-inch long cylindrical seed pods. Look for it on roadsides, in ditches and in open fields and woods. Dame's rocket is a self-seeding biennial that can grow as tall as three feet.