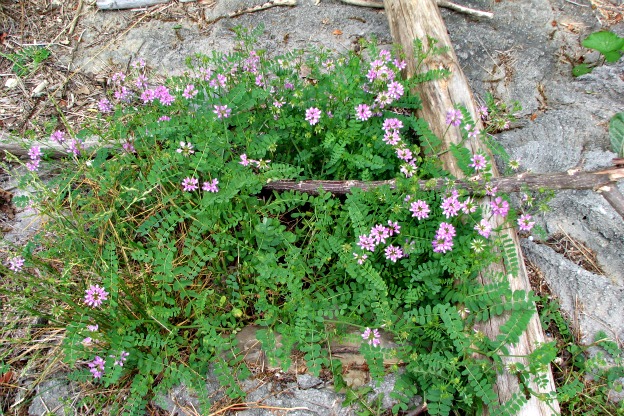 Coronilla varia, commonly known as crown vetch, is a perennial legume. It has creeping stems that form dense mounds of vegetation. Each of the compound leaves has 15-25 leaflets, so the foliage looks lacy.

The flowers are pea-like with blooms that may be pink or white. They are produced in early summer and are followed by narrow leathery seed pods. This extremely invasive plant was first introduced into the United States for use as a control for erosion and was widely planted across this country along highways and roadsides.

The irony was that it was an inappropriate plant for this purpose. Instead of producing a mat of fibrous roots that would hold the soil in place on slopes, it has just one tap root. However, it does spread rapidly by underground stems and has invaded many of our open prairies and savannas.

Other non-invasive plants that are superior for erosion control are round-headed bush clover (Lespedeza capitata), purple vetch (Vicea Americana), and goat's rue (Tephrosia virginiana). These also look attractive if they are mixed with native grasses.