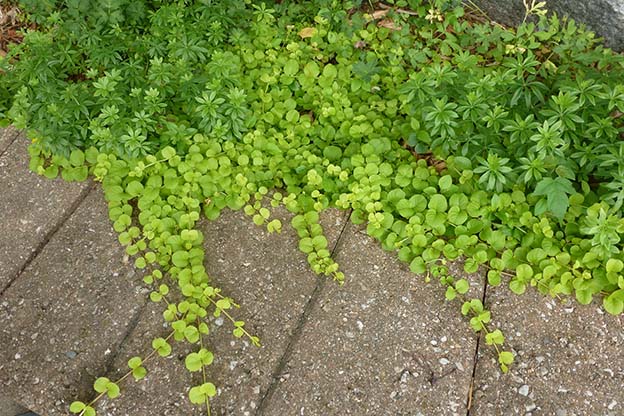 There are about 150 species of perennials and shrubs that belong to the genus Lysimachia (lye sih MOCK ee uh). Commonly called loosestrifes, these species are vigorous and one needs to be careful about where they are placed in gardens.

(One loosestrife, the purple Lythrum species, has become a serious invasive, but it's not part of the primrose family to which the white- and yellow-flowered lysimachias belong.)

One useful mat-forming loosestrife has the common name of creeping Jenny (aka, moneywort). Its botanical name is L. nummularia (num you LAH ree uh), and it is a fast spreading perennial with stems that root as soon as they touch the soil.

The gold foliage variety is ‘Aurea', and it grows in zones 3 through 8 and has semi-evergreen leaves and tiny single yellow flowers in summer.

Never plant it where it borders a lawn, as it will escape into the grass and be impossible to get rid of! Rather use it in beds that are contained and in pots and planters where it will drape beautifully over an edge and contrast with nearly every colored flower.

Planted in the right spot, creeping Jenny is a fetching little plant. So remember it when you are planting your containers this spring.