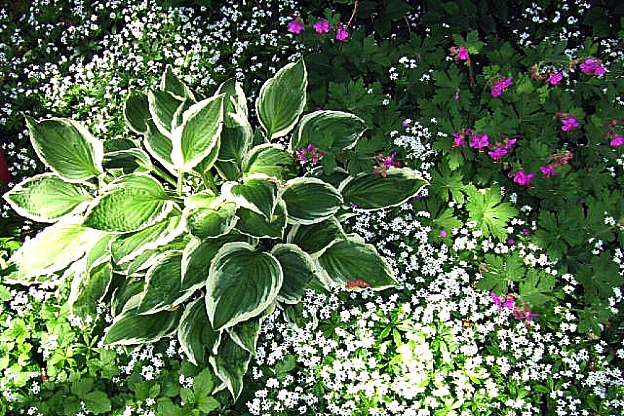 She may have been one of the first to write about using plants as ground covers. In the early fifties she wrote:

“The more I prowl around my garden…the more I become convinced that a great secret of good gardens lies in covering every patch of the ground with some suitable carpeter.”

What she called “carpeters” we would call weed suppressing plants—shade plants like hosta and cranesbill geranium, lady’s mantle and epimedium that shade the soil beneath them thereby discouraging weed seed germination and growth.

Another good mat-forming plant that does well in sun is the white or pink blooming candytuft (Iberis), the silvery grey lamb’s ears, creeping thyme, catmint and some of the low-growing sedums. Fragrant dianthus varieties such as ‘Artic Fire’ are also useful, and deer usually avoid them.

The denser the plant carpet, the better suppression of weeds it will provide. I once saw some wooden rectangular boxes set in gravel and each box contained just one type of cranesbill hardy geranium, so that one box was in bloom at any given time. The focus of attention thus moved from box to box as each carpet plant came into flower. And there were no weeds!