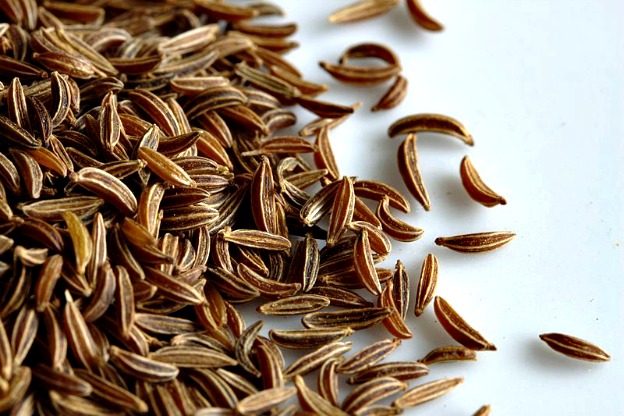 Caraway is a culinary herb with seeds that are widely used in rye bread, in cheese, and also in cakes.

The botanical name is Carum carvi, and caraway is a member of the carrot family. The aromatic dried seeds are actually the plant's fruit, and caraway oil is extracted from these seed-like fruits. Small amounts of the oil have been used medicinally for indigestion and colic. An infusion of oil would be poured over a sugar cube to make it more palatable.

Caraway herbs are native to Africa and Eurasia and also now grow wild in meadows and rocky spaces in parts of North America. The plant is a biennial and grows about two feet tall with feathery leaves. The branching stems end in clusters of tiny white flowers in June and July, and the seeds are brown and ridged.

In Europe, it was once used as a love potion and was thought to prevent theft. Farmers fed it to chickens and pigeons to prevent them from flying away. Modern researchers have confirmed that caraway oil has a mild antispasmodic effect in addition to its culinary appeal.