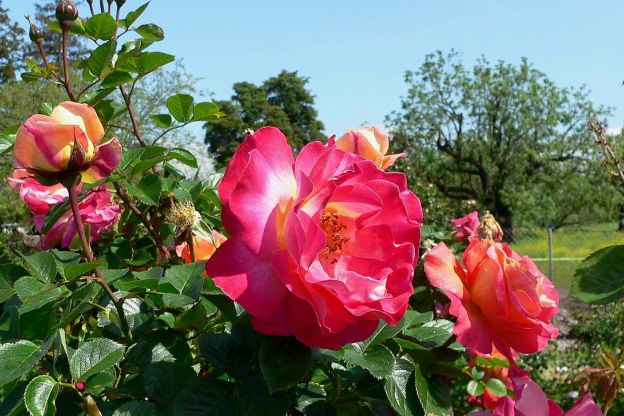 Dr. Griffith Buck (1915-1991) was a Professor of Horticulture at Iowa State University. He developed over 80 named cultivars of roses capable of withstanding temperatures of -20F and needing no pesticides or fungicides to thrive. He earned his PhD in 1953 in both horticulture and microbiology.

During World War II, Buck served with the US 13th Airborne as a paratrooper. Neils Hanson, Buck's colleague at Iowa State after the war, brought him cuttings of a rose from Siberia. Buck crossed these with a number of other varieties of roses, some from German rose breeder Wilhelm Kordes.

Buck grew his plants for their first year in a greenhouse and then planted them outside their second spring but never sprayed them or used chemicals. The cultivars that he developed became popular during the 1980s and 90s.

‘Carefree Beauty' is one of his most well- known, and it grows in my Midwest garden and I can attest that it lives up to its name and is well adjusted to our climate extremes.

Buck attributed his interest in roses to having a Spanish pen pal, Pedro Dot, who was a rose breeder and who ignited Buck's passion for roses while he was still in high school in Rockford, Illinois.

Today, the largest collection of his signature cold-hardy, disease-free roses are in the Griffith Buck garden at Iowa State University's Reiman Gardens. Search online for sources for Buck roses. All survive both cold winters as well as hot humid summers. I like ‘Carefree Wonder', ‘Folksinger', and ‘Distant Drums', but then again, I've never seen a Buck rose that I didn't like and covet.