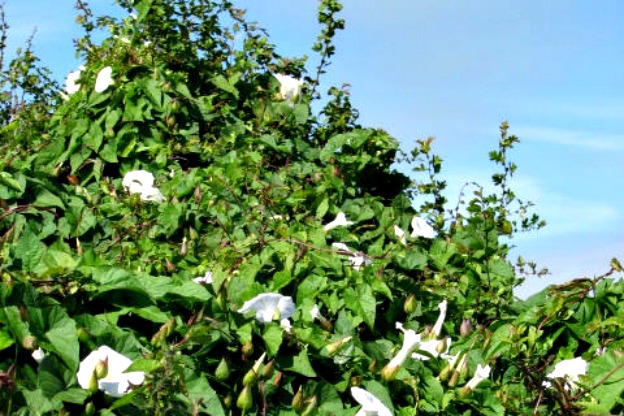 Convolvulus sepium is a member of the morning glory family and has similar shaped flowers, but it is not valued by gardeners.

It has the nasty habit of twining itself insidiously around host plants, spiraling counter clockwise around erect stems or fences to support itself in its strangulating habit. It is native to both Europe and North America from Canada to the Eastern half of the United States and also in the mountain states and the Pacific Northwest. It is perennial and can grow up to 15 feet, climbing on its neighbors for support.

Most bindweeds, as they are commonly called, have white flowers, but they can also be crimson, pink or yellow. Some have flowers that remain closed on days when there is no sun. They all have arrow shaped leaves on long stems. The underground rhizomes are hard to dig up.

They have been used medicinally to produce laxatives and gall bladder remedies.

The best way to eliminate bindweed in your garden is to: