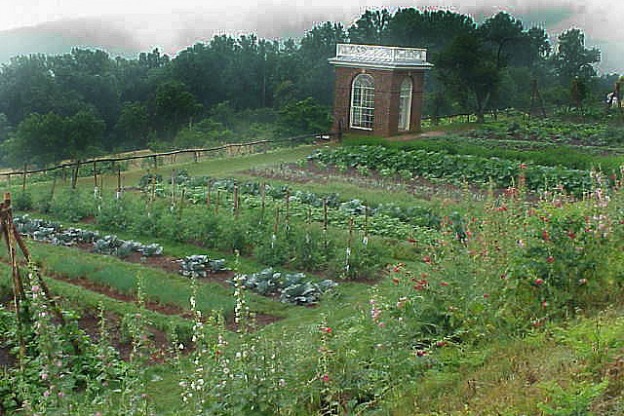 Jefferson had studied books about English gardens, so on the first day of his tour he visited five gardens he had read about. The second day he went to Woburn Farm. He had missed the snowdrops and crocuses but saw the Canterbury bells, narcissus and primroses. He also admired the crabapple trees covered in white flowers and the alders covered with yellow catkins.

Phillip Southgate who designed the landscape at Woburn Farm in the 1730s was the first landscaper to blend a farm with a pleasure garden. He combined beautiful groves of ornamentals with tidy farmlands. Jefferson fell in love with this garden concept where the beautiful not only coexisted with but complemented the practical.

Later in his life Jefferson implemented the ideas he had seen at Woburn into his own landscape at Monticello. There at his American home his five ornamental gardens were framed by pastures, and colorful flowers were combined with vegetable plots and experimental crop plantings.

He delighted in ornamentals but also needed to pursue crops that would generate money, so his gardens at Monticello combined the beautiful with the practical. The two coalesced into one harmonious landscape that has been admired and copied ever since.