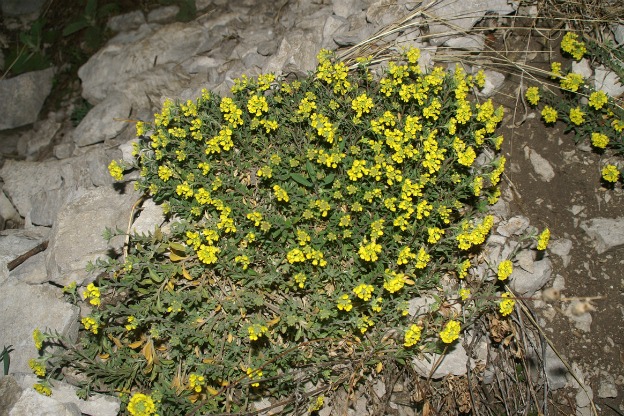 Perennial alyssum is an early spring bloomer. While it is often a short-lived perennial, it produces masses of dainty yellow flowers and looks splendid in a rock garden or hanging over a wall.

The soil must be well drained, and preferably, slightly acidic but not rich. It is best to cut this plant back after its early and exuberant display of early bloom to stimulate new growth.

Alyssum was imported to the U.S. from Crete in the early 18th century. The genus name Alyssum comes from the Greek, and "a" means "without" and "lysson" means "madness" or "rage." Common names include "basket of gold," "gold dust," and "mad wort" since "wort" means a "common plant."

The flower clusters are made up of tiny, little florets. Legend has it that those who wear a sprig of this flower on their lapel will prevent others getting angry with them. In ancient times this plant was used medicinally as a cure for phobias and emotional disorders.

I grow it in a raised bed near some evergreens, hoping their needles will add some acidity to the soil. It gets about 6 hours of full sun and sometimes self seeds. I have seen alyssum in hanging baskets in cooler climates but have never been successful when I tried it in baskets. A short variety is A. compactum, which has brighter yellow flowers than the taller variety that I grow. It is truly a cheerful harbinger of spring.