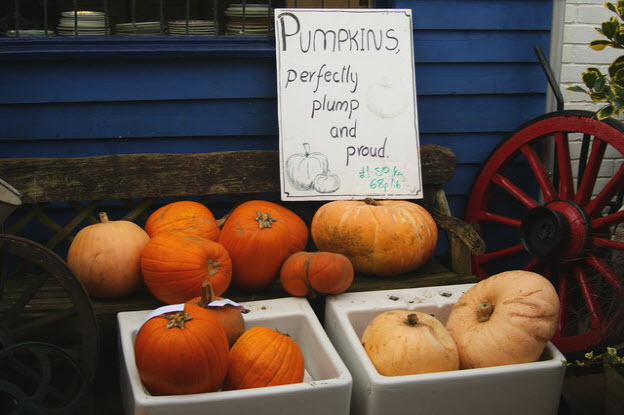 What About The Pie?

Earlier this fall, Libby's announced fewer pumpkins would make it into cans this year as rainy weather in Illinois has affected the pumpkin crop.

Half of all pumpkins produced are canned, and overwhelmingly those pumpkins destined for cans come from Illinois.

A spokesperson for Libby's reassured consumers that there would be enough pumpkin to get through this year's Thanksgiving pie season, but the "cushion" of additional pumpkin won't likely be here this year.

Other parts of the country saw less rain than usual.

That has leftÂ Virginia farmers with pumpkins that are smaller than expected, but farmers actually point out that less rain is better than too much rain.

ExcessÂ rain leads pumpkins to rot when they can't absorb all of the water. Too little rain means pumpkins improvise -- their roots go far enough into the soil to pull moisture out to grow.

(Not So) Giant Pumpkins?

Half Moon Bay, California hosts the Safeway World Championship Pumpkin Weigh-off annually, and this year, the prize pumpkin weighed in at 1,969 pounds -- a far cry from the previous year's 2,058 pounds.

The winnerÂ was grown in Pleasant Hill, Oregon, an area that experiencedÂ slightly better weather this season.