The Unpalatable Truth About Life In A Global Village 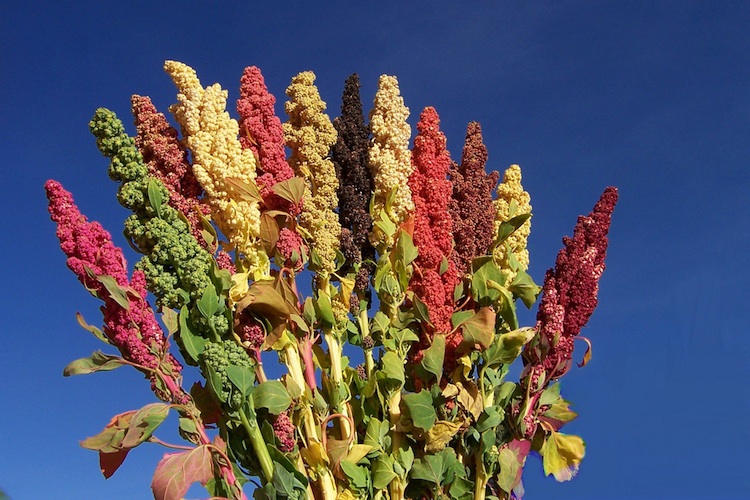 Last week, journalist Joanna Blythman caused quite a commotion among foodies with an editorial she wrote for the Guardian titled "Can Vegans Stomach The Unpalatable Truth About Quinoa?"

Her central thesis is that well-to-do vegans in North America and Europe are purchasing so much quinoa that its market price has been driven out of reach for many poor South Americans in Bolivia, Peru and Ecuador, who have traditionally relied on the nutrient-packed chenopod for sustenance. She also claims that vegans' demand for meat substitutes generally is leading to environmental degradation as worldwide production of various protein-rich plants expands and these goods crisscross the globe.

While identifying and scrutinizing the broader impacts of our food choices is incredibly important -- that's what we here at Earth Eats are all about, after all -- Blythman's analysis ought to strike us as both odd and distorted on a number of counts. Let's have a look.

Starting off, we should note that the Guardian piece isn't exactly breaking news. Indeed, readers will likely recall coming across the story (though told in a much more nuanced manner) in outlets like The New York Times, NPR and Time all the way back in 2011.

That none of these accounts is referenced and that much of the information they contain is missing from Blythman's account is suspicious. Is this a case of an experienced journalist failing to do her research, or is there a strong a priori bias at play against those who do not consume animal derivatives?

Regardless, both the tardiness and incompleteness of the piece are disappointing in light of the Guardian's status as one of Britain's leading papers.

Next, given that more than just vegans are cuckoo for quinoa, we should wonder why Blythman singles them out. Vegans comprise a mere 2 percent of the total U.S. population; in the U.K.,Â according to one survey, that figure hovers around a piddling 0.3 percent. Point is, the demographic hardly seems big enough to have single-handedly tripled quinoa's price in the last few years.

Even more glaring is Blythman's omission of the well-established relation between meat consumption and various social and environmental ills.

When she says things like, "The quinoa trade is yet another troubling example of a damaging north-south exchange, with well-intentioned health and ethics-led consumers here unwittingly driving poverty there," or, "Soya, a foodstuff beloved of the vegan lobby... is another problematic import, one that drives environmental destruction," she's implying that vegans are placing higher importance on animal rights and personal fitness than on the well-being of impoverished human beings and the health of the biosphere.

But any ethically-driven vegan would vehemently contend that this dichotomy is a false one! The reason many individuals choose to abstain from animal products is precisely because they're concerned with all of the above: health, animal cruelty, world hunger and environmental impact.

Not only is the avoidance of industrial meat, dairy, eggs and gelatin arguably better for vegans' bodies and certainly better for the bodies of animals they don't use, to "go vegan" is, in a sense, also to protest an agricultural system that devotes vast swaths of arable land to mono-cultured feed crops instead of to the cultivation wholesome foodstuffs for people.

If Blythman believes the pros of the livestock industry (job creation, for instance) outweigh the cons, that's fine, but she should at least acknowledge that the omnivore's diet -- regardless of how locally-oriented it is -- is not beyond reproach.

(In a footnote added a day after the editorial's initial publication, Blythman admits that 97 percent of all soy grown ends up in feedlots.)

Finally, we arrive at the intricacies of international exchange. Blythman's analysis is severely lacking on this front too, being at the same time too narrow and too shallow.

1. Too narrow: Because Blythman is so focused on linking vegans' eating habits to the plight of impoverished South Americans, she's neglected to consider other effects of quinoa's growing international popularity.

For example, according to another recent report published in the Guardian, quinoa brought in some $35 million for Peru and some $85 million for Bolivia during 2012. Although it is unclear exactly how this revenue was distributed, there is no doubt that incomes are rising for poor quinoa farmers. In other words, higher prices aren't necessarily a bad thing.

Another thing Blythman neglected to consider are other potential causes of reduced quinoa consumption among Bolivia, Peru and Ecuador's lower classes. As more in-depth treatments (see The New York Times article referenced above) of the quinoa situation reveal, price isn't the only factor. Changing tastes are also important.

For better or worse, many younger folks in traditionally quinoa-eating regions have simply come to prefer less-healthful alternatives such as rice or noodles. This shouldn't be terribly surprising; we here in the so-called 'developed world' make nutritionally-suboptimal eating decisions all the time.

2. Too shallow: Blythman -- again, due to her over emphasis on vegans' role in the quinoa inflation saga -- fails to ask deeper, and very pertinent, questions concerning production and the role of government.

Conspicuously absent from last week's editorial is any discussion of how expansions or contractions taking place on the supply side of the quinoa market might impact prices. But we would do well to remember that if the cost of a pound of quinoa is too high, there are two ways to bring it down. The first, of course, is to decrease demand somehow -- maybe by way of an editorial that maligns quinoa consumption.Â The second option, however, is to boost the amount of quinoa being produced -- maybe by way of subsides or other incentives.

This leads us to the matter of governmental intervention.

While there are definitely those who believe markets should be allowed to operate without restriction, most favor some degree of governmental participation to internalize externalities or otherwise achieve social goals. If an uptick in malnutrition is a concern owing to quinoa's price tag, national governments -- perhaps with the help of the global community -- may want to redouble existing efforts not only to augment production, but also to make sure the most vulnerable members of society have access to the food they need.

So, now that we've painted a more complete picture, how do we as conscientious eaters respond? Unfortunately, the answer is far from clear.

Do we stop importing South American quinoa? Well, what about all those farmers whose standards of living have steadily crept upwards these last few years? Elsewhere, Blythman has celebrated access to international markets as a means of empowerment, so it's hard to say if even she really wants trade to cease.

Do we go in the opposite direction and up our quinoa intake? The United Nations seems to think so, but what about all the miles quinoa has to travel, and what's to be done about food prices? How much governmental intervention should we push for?

Do we all go vegan and send the livestock industry into oblivion? There's that pesky issue of jobs and income again.

Truth is, in a world as complex and interconnected as ours, ethical consumption is seldom easy. The best we can do is put all options on table, explore their potential ramifications, decide accordingly, and hope we've minimized harm.

This will take clear and serious thinking, however. We're going to have to try very hard not to let preconceptions lord over us.