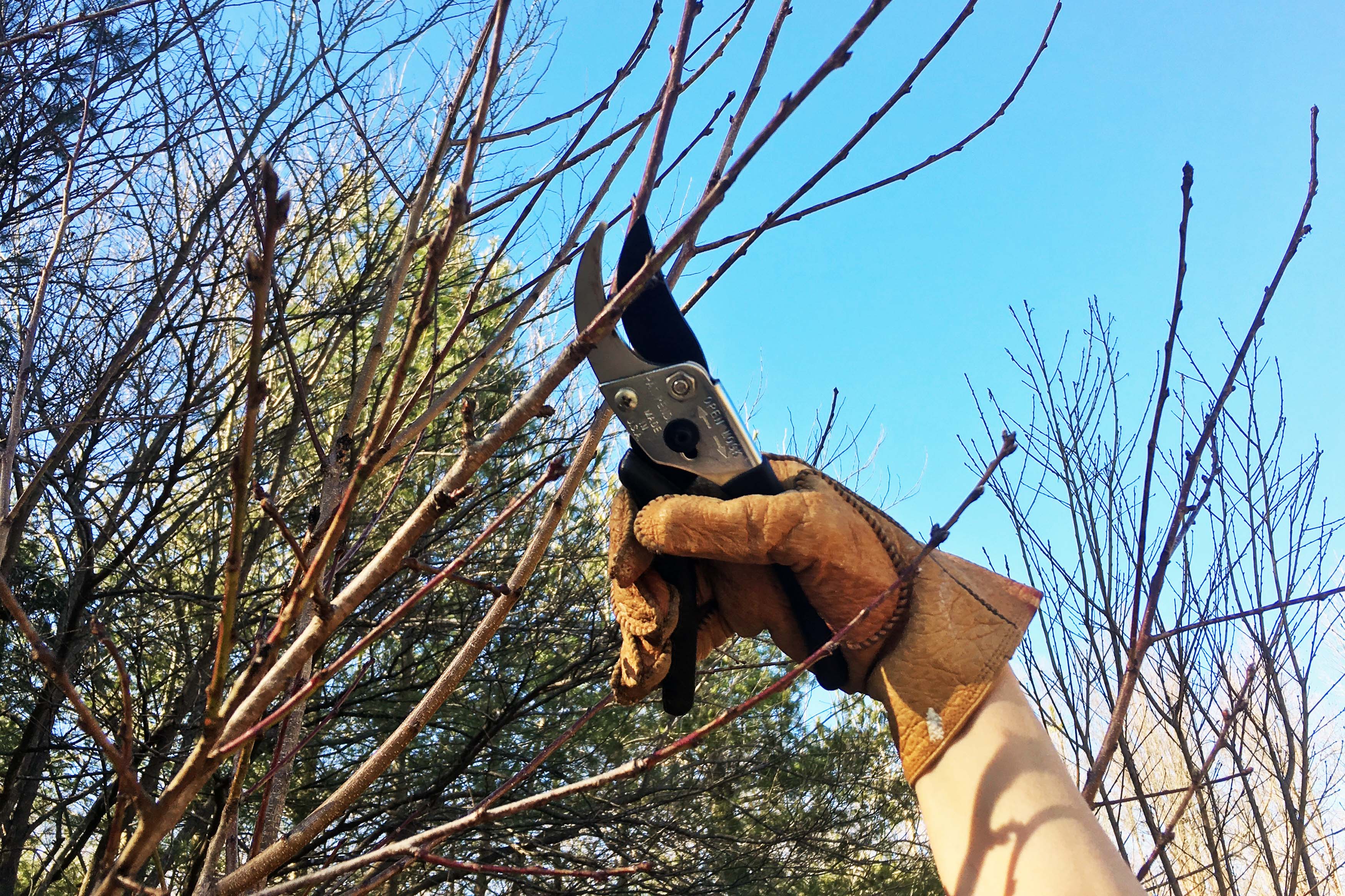 Last week, we had California farmer and author Mas Masumoto on the show to talk about the theory of pruning peach trees. Since we're still in that pruning time of year, I wanted to get a hands-on lesson from someone closer to home for this week's show.

Nightfall Farm is located in near Crothersville, Indiana. It's a 250-acre area, some of which is wetlands; some is rented out to other farmers. Nate and Liz Brownlee farm 15 acres themselves. This is Liz's family land that they converted from conventional corn and soybean production into pasture for their chickens, turkeys, sheep and pigs. They grow a small garden and they have about a dozen fruit trees.

This land has a lot of history on it, much of which was made before Liz and Nate took over, but this little orchard is chapter one of their farming story.

Liz is 30 years old. Nate is 32. Several very scraggly apple, peach, pear, cherry and nut trees mark the perimeter of the garden. Liz and Nate reached out to Kris Medic, the Purdue Extension Educator for Bartholomew County, for advice on pruning. She is also a board certified arborist.

Despite the unseasonably warm day, Kris says this is the perfect time of year to prune fruit trees because you can see the structure of the tree and you can guide the growth of the tree for the coming season. She advises them to remove any branches that's dead or dying. Remove limbs that are crossing or rubbing, broken or diseased. And trim back anything that is pointing toward the interior of the tree or pointing upwards.

Liz grew up on this farm, but she didn't grow up farming. By the time she was born, her folks had stopped working the land themselves and had instead rented it out.

"When they got married, they bought this farm and they did the kind of standard corn, beans, wheat, 20-head of beef cattle, some hay land," says Liz. "And they just couldn't make it work. The policy was get big or get out, and they weren't going to get any larger. But they did something special -- they held onto the land."

She met her husband Nate at Hanover College. He came to agriculture by way of his anthropology degree. They traveled after college, with Nate working on farms in Pennsylvania, Maine and Vermont:

At the end of the day, we were working on great farms, but we were giving the best of ourselves to another farmer. We'd been married for about three years. I'd come home blown, so I'd be on the floor while she was in school, and we didn't have much quality time as husband and wife. We were moving every year or two so we weren't really putting down roots and able to build toward a project or a vision or a goal. And her dad was sick, and land access is one of the biggest hurdles for young, beginning farmers, so it seemed like a no-brainer. Come home where family is, where Dad needed help, and where we would have a chance to build our own thing, to put the best of ourselves into our own farm.

That was winter of 2013. They planted the orchard the following spring, and now after three years of waiting, they expect their first fruit harvest this year.

These trees represent the Brownlee's hope for the future of their farm. They want to continue growing their meat operation, and eventually they see their animals grazing under the shade of these trees. They also want to be the primary food source for about ten family members. They have a third-of-an-acre garden, plus the meat, and these fruit trees compliment that vision.

Liz's father was initially nervous about their decision to come back home and farm. He died a couple years ago.

"He lived long enough to see the pigs on the farm, and he knew we had gone to pick up the chickens from the butcher, so he knew we had something to sell. And I think, you know, we have a lot of questions we wish we could have asked. He wasn't the most communicative there at the end, so we couldn't ask which are the wettest fields?"

But they're figuring it out. They're still investing in the farm's infrastructure, so Nightfall Farm isn't turning a profit just yet. They get influxes of cash from their CSA members and Thanksgiving turkey sales. But as Nate put it, they're happy to give the best of themselves to their farm.

"Hoosiers have a lot to be proud of. We're not just a crossroads of America, and there's a lot that we need to do to fight the brain drain," he says. "We went to New England to learn how to farm. Vermont was a great place to learn farming, but if everybody leaves and stays in Vermont, Vermont gets not that much better, and Indiana gets worse."

Kris makes her way around to all the fruit trees at Nightfall Farm, pruning and teaching as she goes. Liz and Nate collect the brush to give to the goats later.

Diversify The Landscape By Diversifying Who Works It

Enrollment in Agronomy at Iowa State has more than tripled since 2006. That fall, there was just one agronomy student who identified as other than white. Today, 23 students do.

Starting in 1910, Dearfield began attracting hundreds of black homesteaders from across the South, Midwest and eastern portion of the Plains. They came to the town for opportunity.

How A Maryland County Cut Soda Sales Without A Soda Tax

Over three years, a campaign urged Howard County, Md., residents to pare back on sugary drinks - through ads, social media, health counseling and changes to what vending machines sold. And it worked.

How To Make Pine Needle Tea

You can identify a white pine tree by its clusters of five needles per bunch.

After court documents unsealed Tuesday raised questions about research methods, Monsanto says it did not ghostwrite a 2000 study on the safety of glyphosate.