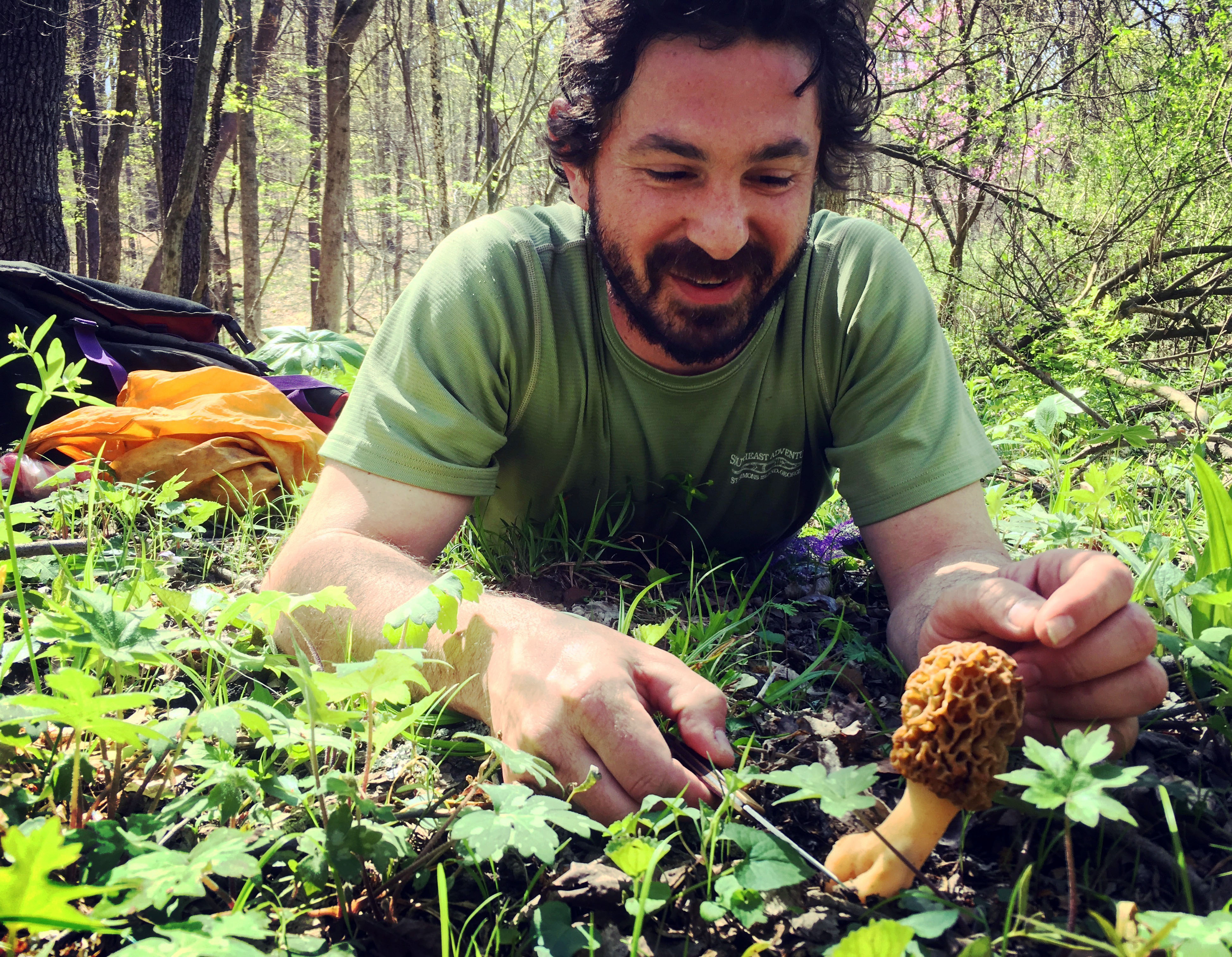 When I met Ryan Hines at his home to start our morel foraging adventure, the first logical interview question would have been, ‘Where are we going?' But I knew there was no way he was going to tell me that.

"Well, we're going to the Hoosier National Forest, to an area I've been scouting," he said. That narrows it down to somewhere in a 203,000-acre area in southern Indiana.

Ryan started foraging for mushrooms in Georgia, and when he moved to Indiana five years ago, he continued the hobby. During peak season, he's out in the woods looking for morels every day, sometimes multiples times a day. He says much of the work of scouting for morels happens off-season. "Looking for areas where there's water, and we want certain types of trees," he says.

Ryan was very specific when he chose our destination that day. He knows that morels like to pop up when an area has received 1.5 to 2 inches of rain. He looks at 7-day, 14-day and even 30-day rainfall trends. Ground temperature is also key. 50-60 degrees is ideal for most types of morels. He searched for water sources near slopes that provide shade. He looked for certain types of plants and trees.

And then there are his more unorthodox methods:

My buddy Chris and I... it started out as a turtle hypothesis, but now it's reptile hypothesis. Whenever we get into an area where we're seeing lots of box turtles that are either emerging or out or mating, those are warm areas, because they're cold blooded, so they're tuned in to, ‘Where is it warm?'

Partners In The Woods

The Hoosier National Forest is public land, so we are permitted to harvest morels for our own use -- but not to sell. No problem there. We want to eat our spoils.

Ryan points out plants that grow in conditions similar to those preferred by morels -- mayapples, trillium, bloodroot and trout lily.

Then of course, he points out trees -- elm trees in particular. The leaves are distinctive, with a curved center vein and one side of leaf always being a little longer than the other. The bark is a Y-pattern. "Live, dead, dying elm is probably the most consistently cited spot for, 'Okay where are we finding them or where do you look?' Look under elms," he says.

Ryan joked about his Terminator vision, but being in the woods with him, that's no joke. He spotted all eight morels we collected over the course of the three-hour hike. Into the mesh bag they went, so that as we continued walking, the spores would drop out and (perhaps) fruit more mushrooms next year.

With all the rain and cooler temperatures southern Indiana has experienced in May, will we see another flush of morels this season? Ryan is not especially optimistic, but you'd better believe he'll be doing his research just in case.

Take care to clean your morels well before you fry them up. A salt water bath helps to remove any bugs that may have made a home in your mushrooms.

Immigrants choose to go through the naturalization process for many reasons, including gaining the right to vote and to rest easy about immigration status.

The FDA has put off a rule requiring calorie counts on menus at big food chains until May next year.

Perdue earned a doctorate in veterinary medicine and has had a long career operating family agribusiness and transportation companies.

Harvest Public Media's Peggy Lowe sat down with the Secretary of Agriculture to talk about Trump Administration's priorities for our food system.