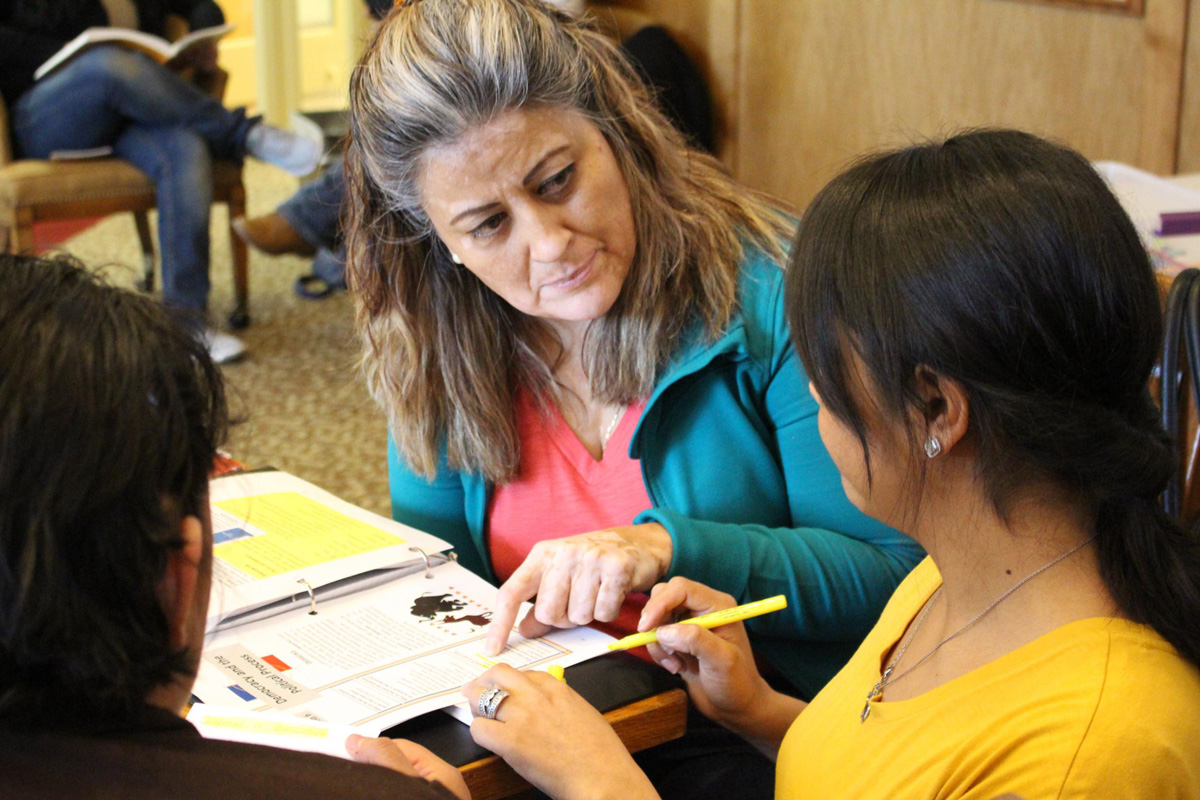 This story is part of the special series United And Divided, which explores the links and rifts between rural and urban America.

At the public library in the rural Morgan County town of Brush, Colorado, Marissa Velazquez welcomes her students to class. It’s a sunny Saturday morning, and today marks the halfway point in Velazquez’s class, a ten-week crash course on American history, civics and English.

Everyone in it has the same goal: become an American citizen. In two hours, Velazquez runs through voting rights, the legislative process and some grammar tips.

Pop quiz: When do we celebrate the venerable American holiday of Flag Day?

Answer: June. Despite the fact that many natural-born Americans likely don’t know the answer, Flag Day is a potential topic on the test for U.S. citizenship.

While Velazquez runs through the history of voting rights in the U.S., she asks the students if any of them would have been able to vote in the mid-1800s. The answer is no. No student would have been able to vote in America’s early years. The class includes middle-aged women and young men of Mexican and Central American descent, and men from war-torn African countries. Nearly all of the students work in either meatpacking or dairying.

Many immigrants in the U.S. – and in Morgan County – are worried that changes to immigration policy pushed by the Trump administration could impact their families. Panic has swept through communities of immigrants all over the country, in highly visible places like Los Angeles and New York.

But in some smaller towns with less visible immigrant communities, that same fear has spurred some to take steps to go from green card holders to fully-fledged citizens.

The number of people who applied for U.S. citizenship rose across the country in 2016. And while there’s no definitive data for the first part of 2017, there are small indications that same trend could be continuing this year.

To become naturalized, applicants are tested with a series of questions about the U.S. They are given a dictation exam and an interview, most often in English. Thus, the class.

“I never thought I would teach the class, because I took this class, as a student,” Velazquez says.

Originally brought by her parents from Mexico to Morgan County as a child, she became a naturalized citizen in 2016.

“That’s why we get to practice listening skills, writing skills, reading, so that they’re ready for when they go in for their interview to become a citizen,” she says.

While these test preparation, classes are pretty standard in some parts of the country, often offered by nonprofit groups and immigration law firms, what makes this one unique is its size. In 2015, 10 people finished it. In 2016, just five. This year, Velazquez has a class of 21 students. In a rural area like Morgan County, that is huge.

“We have students from Mexico, from Guatemala, El Salvador, and from Ethiopia,” Velazquez says. “Some are refugees, and some, like me, were brought here by their family.”

Since the 2016 presidential election, a renewed focus on immigration and international travel has left more immigrants feeling uncertain, even those with legal, permanent status.

That keeps Lisa Pray, the only immigration attorney in Morgan County, busy.

Pray says she has noticed more of her clients asking about the citizenship process. Pray says she is hearing from longer-term residents – people who’ve been in town for more than a decade.

“There’s a lot of fear in the community,” Pray says. “Usually people who’d been here a long time, they decided to get their citizenship when they had some relative they wanted to bring over.

“Now, what I’m hearing from people is, ‘I just want to make sure I get to stay.’”

When President Donald Trump began signing executive orders expanding the immigrants eligible for deportation and restricting international travel from some Muslim-majority countries, Pray says Morgan County’s sizeable immigrant population was shaken. But the fear has also acted as a motivator.

“It has spurred a lot of people who are permanent [residents] to apply, or decide to get their citizenship,” Pray says.

The Department of Homeland Security’s Office of Immigration Statistics holds official records for the number of people who become naturalized citizens each year. It’s too early to put a definitive number on whether this surge of interest turns into an increase in the number of citizens.

Immigrants choose to go through the naturalization process for many reasons, including gaining the right to vote, to freely travel and to rest easy about immigration status.

This is one of the big benefits associated with becoming a U.S. citizen: you can’t be deported.

“This is one of the big benefits associated with becoming a U.S. citizen: you can’t be deported,” says Mark Hugo-Lopez, director of Hispanic research at the Pew Research Center.

The number of people seeking citizenship tends to ebb and flow, often peaking when the application fee is set to rise or during an election year. Roughly 1 million people applied to be naturalized citizens in 2016, the highest number in nearly a decade. A previous record was set in fiscal year 2007 when, ahead of an increase in the application fee, nearly 1.4 million people applied to be naturalized.

Hugo-Lopez, though, says there are still millions of eligible immigrants not seeking citizenship.

“Many of them when you ask them will say they want to become one, but they will also cite reasons like the cost and language being potential barriers,” he says. “They will also say, for example, they’re busy, they’re working, they don’t have the time, they haven’t even thought about it.”

As the class wraps up in Brush, the students file out. This week’s homework is to study up on amendments to the constitution -- all 27 of them. Student Kibrom Baraki, a refugee from Eritrea, works at the nearby meatpacking plant, hanging cow heads for hours each workday.

“I didn’t have freedom [in Eritrea], and everything is bad. That’s why I escaped from my country,” Baraki says. “After that, the American government is helping me come here.”

In a few months he’ll be eligible to take the test, having been in the U.S. for five years.