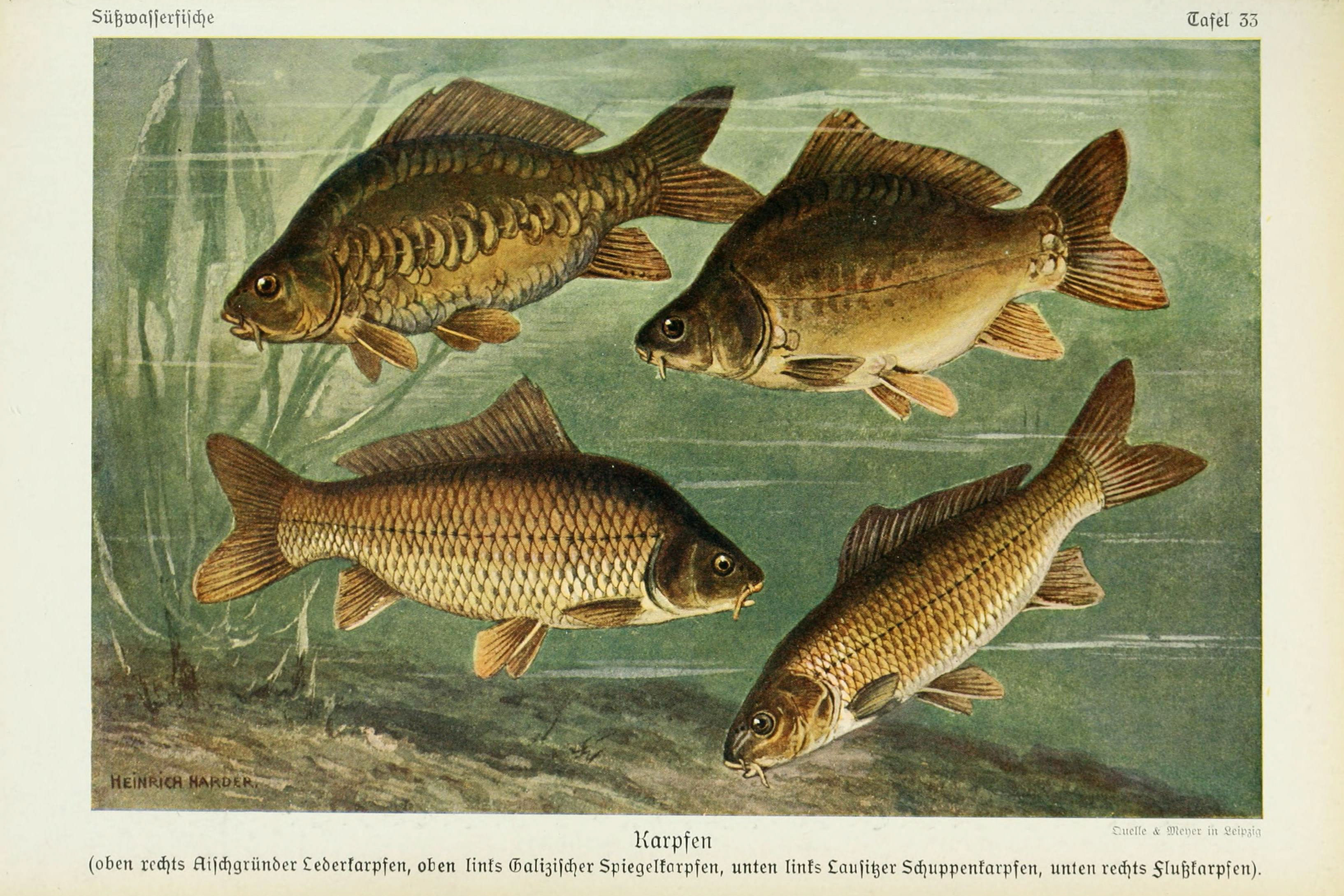 The Wild Carp Classic takes place this weekend alongÂ the Seneca River in New York. Fishing teams are awarded prizes for the highest combined weight of the tenÂ largest carp they catch with a rod and line.

The fish they'reÂ catching are the common carp. As we learn from anthropologist and PhD candidate at Indiana UniversityÂ Ellen Ireland, not all fish that are called carp can be caught by angling. She spoke with Leigh Bush and Maddie Chera of the Indiana University Food Institute.

Before we get into it, Ellen explains what fish we're actually talking about:

People have gotten so used to seeing (common carp) -- first in 16th, 17th and 18th century art and then later as koi in decorative arts -- that when somebody draws a generic fish, the shape they're drawing is often a carp... Big scales and one big fin on the back and all these characteristics that are absolutely just typicalÂ of carp.

This interview has been edited for length and clarity.

Leigh Bush:Â So, Maddie, have you ever eaten carp?

Maddie Chera:Â I don't think so.

LB:Â If there are so many of them, but I don't think I've eaten them either.

Ellen Ireland:Â Most people haven't. It's in some processed foods, like gefilte fish is often made with some combination of carp and pike. Most of the time when people cook it, they chunk it up and fry it. You can soak it in different flavorings, because people refer to it sometimes as fish tofu. It will take on the flavor of whatever you put on it.

MC:Â I know that not that many people are eating carp these days in the U.S. Could you say some more about that? Why is that?

EI:Â I'm going to actually begin that by talking about the factÂ that people did used to eat it. Im' going to go all the way back to the Roman Empire when they invented aquaculture. What they would do it take fish from the rivers and chuck them in this pond and hope they would reproduce, but they didn't really understand things like salmon have to go out to the ocean and so do eels, and the fish that survive best in big muddy ponds are carp and their natural predator the pike. So, you end up with this tradition of aquaculture coming from the Romans, to the early Catholic Church, and then they start making these ponds to be self-sufficient. That's part of how they became so popular in Europe.

In the mid-19th century in America, they found that there was a fishing crisis. They had heavily over-fished the Atlantic, and the Civil War had just ended, and there was a lot of food insecurity in America. So, Spencer Baird became the first Commissioner of Fisheries and he sent out a go-around to all his scientist friends and said, 'What kind of fish should we farm? What's something that grow quickly and easily and people want to eat?' A friend of his, who was a German ichthyologist, said, 'There is nothing better than a carp.' So, having never eaten them or seen them, the U.S. government started importing carp from Germany.

We spent a couple years farming these fish in order to get enough baby fish to distribute. Everyone heard about them and thought, 'I can raise these fish in my pond and make a bunch of money. This is going to be the next big thing.' They believed this would be a big economic boon for the Midwest and South and everywhere. After about three years, the carp were large enough to start eating and people ate them. And then they promptly stopped eating them.

LB:Â What happened? Why did they stop eating them?

EI: Well for one thing there was no infrastructure for the market, for one thing. It's 1870. You've got these fish you're raising in a farm pond in rural Illinois. What are you going to do with them? You can't exactly throw them in a semi or a train -- there aren't any. Another problem is most of our native fish in North America were really delicious already. And so when people started eating carp, they thought, 'This fish is bony. Sometimes it can taste muddy. Couldn't we have been raising walleye this whole time?'

MC:Â So what's going on with the carp situation now in the U.S.?

EI: The common carp is pretty much everywhere, and people have grown really used to to it, just because it's been here for 150 years now. There are other fish that were introduced in the 1970s and '80s, which are also referred to as carp although they are not at all closely related. That's the silver carp, the big head carp, theÂ grass carp and the black carp. Most people are familiar withe the silver carp. It's the one that leaps out of the water and hits people in boats and things like that. Yes, it's quite hilarious but also very dangerous because those fish can get up to 80 pounds, but most of the ones that leap are 40 pounds. They're all quite edibles. In fact, the silver carp, because it's a filter feeder, tastes much better than the common carp, but the problem is they're still called carp.

LB: So, there's a negativity attached to the name still?

EI:Â A very strong negativity. Once the carp were everywhere in America, they became associated with environmental damage. To some extent, they really are environmentally damaging. They eat bugs form the mud, and in doing so, they root up plants. These plants are where other fish like to have their eggs and their babies. And also they out-compete other young native fish quite rapidly, because carp can breed at an incredible rate.

LB:Â What's happening today? Do we do anything to try and remedy something like this?

EI:Â The thing is in a normal, healthy river, the common carp isn't going to that big of a deal. It's mostly in manmade and altered situations that it has aÂ chance to become over-grown. For instance, rivers and creeks that have been dammed. The water isn't flowing quickly. You've created a big, silty, shallow pond. It's the perfect place for them to breed. Because they're filter feeders, you can't catch them with a hook and a worm. You can't go angling for silver carp. The only way to catch them is bowing fishing. You have to shoot them with an arrow. If it's common carp, when you go angling for them -- because they can be caught on a rod and reel -- they're so hard to catch, and part of that is that they're a very long-lived fish with an excellent memory. And they will remember any bate they've been caught on in the past.

EI:Â They like fruit. They like bugs and meat and some plants. You just sort of mash it together in a ball. They're very sensitive, though. They don't like to be able to touch or taste metal, so you have to completely hide your hook in these balls. They have to have the right texture, too. They have to be like dough.

LB:Â If you had to look into the future of carp, and even looking at natural resource management, what do you think it looks like?

EI:Â There is a lot of money going into finding ways to deal with the silver carp problem, esepcially in Illinois. There have been a lot of problems with trying to create an industry from a product. As I like to say, if somebody could harness cat hair as a product, they would be a millionaire. Unfortunately, carp have been sort of the same thing, where they're like, 'We know there's potential for this to do something. All we have to do is find something people will buy.' Right now, most of the carp that is caught in rivers becomes organic fertilizer, and it's good quality fertilizer. It's just that there isn't exactly a whole lot of money in fertilizer. It takes a lot of effort to catch the fish and then process them and then sell them. There aren't very many commercial fishermen. It doesn't pay great, and most importantly, no one wants a fish processing plant in their backyard.

LB:Â That's really interesting. So, it sounds like leisure anglers or fishermen/people are actually a part of a solution to this problem.

EI: They are, in my opinion, probably the most important part of theÂ solution.

Two years after a devastating bird flu outbreak in the Midwest, many farmers here say they now have a better idea of how to keep bird flu at bay.

Residents of Pretty Prairie, Kansas are concerned about how federal budget cuts might affect their ability to pay for a new water treatment system.

Asparagus, With Vegan Caesar Dressing On The Side

How about a new dipping sauce for simply cooked asparagus?