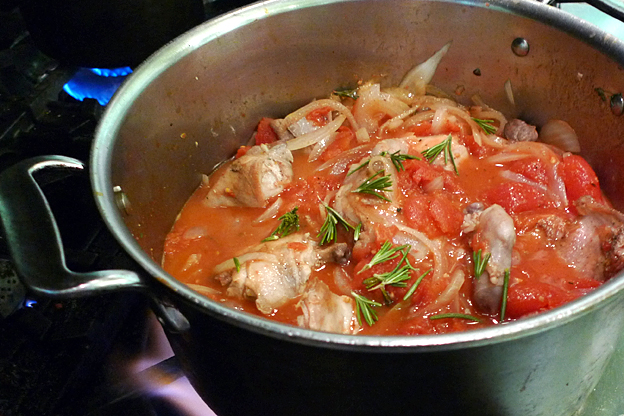 We've got something a little different for you today on Earth Eats...rabbit. Rabbit is a lean white meat that is quite versatile and can be used just as you might use chicken.

Earth Eats recently spoke with Joel Salatin, a farmer and food advocate who raises rabbits (among other things) on his farm:Â Polyface Farm, in Swope, Virgina. Polyface farm wasÂ featured in Michael Pollan's book The Omnivore's Dilemma, and you might recognize him from the documentary Food Inc..

Salatin says that rabbit has a lot to offer:

Rabbit is the most dense protein meat that there is. In fact, historically, that's why the biggest purchaser/buyer of rabbit in our country has been the military for military rations because the protein is so dense that you don't have to eat very much to feel full. Of course, when you're packing your meals on your back, you don't want bulk. It's a very fine textured, very dense meat, extremely flavorful. Our chefs prepare it all sorts of different ways. Culturally, around the world, Italy, France, the Britishâ€¦ rabbit is extremely common and a real delicacy in all of those cultures."

Raising rabbits for food is starting to take off on farms and in backyards alike -- and it makes total sense. Rabbits are healthier, leaner, and a lot friendlier to the environment than most animals.

According to Slow Food USA, rabbits can produce six pounds of meat on the same amount of feed and water it takes a cow to produce just one pound. And for urban farmers, they make a lot more sense than chickens.Â Rabbits are quieter, less smelly, and they're easier to slaughter

Rabbits are also starting to appear on more and more restaurant menus all over the United States. Chef Daniel Orr says that the domestic rabbit is very mild so you can use it just as you would use chicken, but it is especially good in stews, as in our first recipe:

To increase the number of portions, add some Asian glass or cellophane noodles to the salad ingredients.

Thanks to our friends at Gunthorp Farms for providing the rabbits for our recipes.

Your Thoughts? We're trying something a little new with the news section of the podcast this week, making it a little faster-paced and trying to include more stories we covered on the blog during the past week. Let us know what you think about that or anything else we do by leaving a comment or dropping us a line through our contact form.