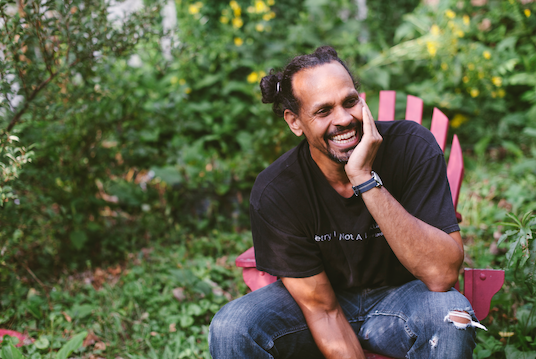 Yesterday I left my building on campus and was biking along the Jordan River--truly, it's called the Jordan River and unlike its more famous cousin, was named for David Starr Jordan, one-time president of Indiana University, eventual president of Stanford University, and pioneer in the field of eugenics--to investigate what I suspected, zooming by a few days back, might be a pawpaw grove. It is a sweet correction this computer keeps making, turning pawpaw into papaw, which means, for those of you not from this neck of the woods, papa or grandpa, which a pawpaw grove can feel like, especially standing inside of it, midday, when the light limns the big leaves like stained glass and suddenly you're inside something ancient and protective.

It only now occurs to me that not every reader will know the pawpaw, which doubles my delight, for I am introducing you to the largest fruit native to the States. Its custardy meat surrounds a handful of large black seeds. It tastes like a blend of banana and mango, in that tropical ballpark, shocking here in the Midwest, and as a consequence of its flavor profile it has been called the Indiana or Hoosier banana, the Michigan banana, the Kentucky banana, the Ohio banana, the West Virginia banana, and probably, the Pennsylvania banana. And maybe the Virginia banana. And most likely the Illinois banana. Alabama banana for sure. And the banana of Kansas. The leaves seem to be insecticidal and smell that way. The flowers are so labial they will warm your heart.

Telling where this grove is--between Ballantine Hall and the President's House, right along the river, which is actually a creek--is not, evidently, the kind of thing you always do, which I learned when I asked my friend Julie where the pawpaw grove was that she was raving about the previous year. "I'm not telling!" she laughed, incredulous, though she does not remember this interaction, or her pawpaw grove, conveniently. I admire her pawpaw covetousness. It reminds me of the dreams I still sometimes have--sleeping dreams--of treasure of one kind or another. As a kid it used to be money, especially silver coins, often in big old chests, something I imagine was informed at least somewhat by the movie Goonies.

But as I get older, the treasure in my dreams seems to shift. Now it's a veggie burger and French fries up the hill and around the bend that I can't remember how to get to. Or one final football game, granted thanks to some kind of athletic eligibility snafu, at which, when I arrive for it, usually late, my teammates either don't recognize me or would rather I didn't play. Or, less miserably, last night I left an event in celebration of my Uncle Roy who was also Barack Obama, because I was underdressed [a theme]. I found some beautiful green pants that fit me well in a chest of drawers in my childhood apartment, though I lost track of the festivities, so enamored was I of theses pants. My mother stepped out from the hall, shouting disapprovingly that the first speaker had already finished, turning quickly on her heel to return to her seat.

The delight of a pawpaw grove, in addition to the groveness, which is also a kind of naveness, is in learning how to spot the fruit, which hangs in clusters, often and somewhat hight in the tree. This encourages pointing, especially if you are not alone, a human faculty that deserves at least a little celebration, something I realized with I pointed toward a grape I had tossed in the direction of a dog to no effect, and then a few days later pointing at a bird for a baby to notice, same result. The pointing skill, pointing and following the point, is acquired (I wonder if there is a pointing stage), and a miracle of cognition. A miracle to know there is an invisible line between the index finger and that barely discernable trio of fruit swaying way up in the canopy, blending into the leaves until they twist barely into the light, and out of it. There's one, you whisper, lest they fly away.

[The photo was taken by Natasha Komoda]

This essay appears in The Book of Delights