A toast to summer's pastimes from roller derby to Rolling Stones, comic-booking to cocktail-mixing, and a sidebar to Bloomington's traditional Labor Day fest. 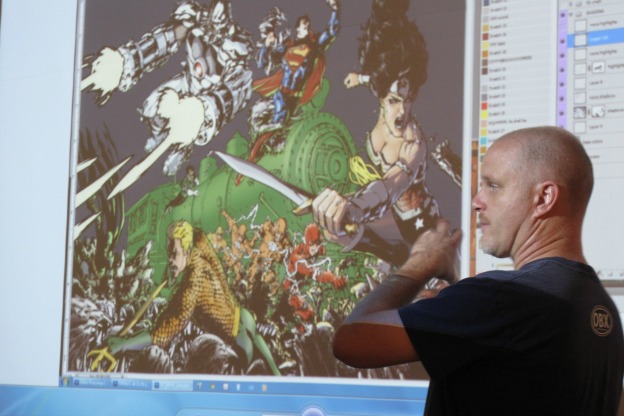 The Sixth Annual 12-Hour Comic Book Day at the Monroe County Public Library on June 27, 2013 featured a visit by professional comic colorist Art Lyon, who explained his craft to the participants.

It’s the last gasp of summer, so we’re recalling all the season’s pleasures and pastimes. We sit in on a practice of the Bleeding Heartland Roller Girls, who are gearing up for international competition; we hang out and draw all day at the Monroe County Public Library’s Sixth Annual 12-Hour Comic Book Day; and, as the Rolling Stones wind up their 50th anniversary tour, we’ll share a story from the Rolling Stones’ self-proclaimed “biggest fan”, produced by American Student Radio. We’ll wash all that down with a long cool foretaste of the best local cocktail, as will be determined August 29th at The Mix Off at the Buskirk Chumley Theatre

And as the Fourth Street Festival of Arts and Crafts signals the official end of summer in Bloomington, we visit with several writers presenting a sidebar event during Labor Day weekend—The Spoken Word Stage.

BHRG To Compete Against Derby Powerhouses

For the first time in the team's 7-year history, the Bleeding Heartland Rollergirls will be participating in WFTDA's annual international championships.

“Comic book” is a pretty loose term in this room, where on one side, it's zombies and explosions, and on the other, an active reconstruction of the genre.