Contemporary painting from Berlin, a celebration of abandoned films, comedian Jimmy Pardo, the Roller Girls at Playoffs, and a memoir about finding your voice. 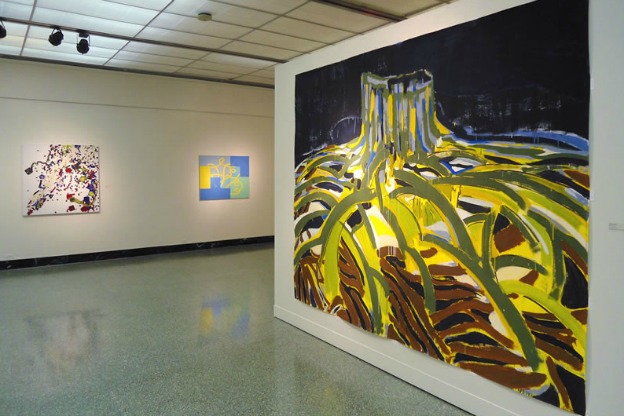 An exhibition view of Geist Und Form at the Grunwald Gallery, featuring paintings by (from left to right) Maarten Janssen, Bernard Frize and Michael Markwick.

And what could classroom film strips and lost-lost adult movies have in common? They’re among the many bits of ephemeral celluloid being screened at the 2013 Orphans Midwest Film Symposium. We’ll preview the festival, taking place at the IU Cinema the last weekend of September.

Also on the program we explore contemporary painting in Berlin, with the curator of a current exhibition at the Grunwald Gallery, Geist und Form: Ten Painters From Berlin.  Several of the painters represented in the show will be speaking on the Bloomington campus this week.

And we chat with comedian Jimmy Pardo, whose day job is warming up the studio audience for the Conan O’Brien show.  Pardo brings his act to Shelbville’s Strand Theatre on September 21.

Finally, we glimpse into Mary Ellen Stepanich‘s memoir about how she finally found her voice through group singing.

The Flatliners Have Heart

Bloomington's Bleeding Heartland Roller Girls competed in playoffs this year for the first time in the group's 7-year history.

Ten international painters living in Berlin explore the spiritual and formal elements in their more or less abstract paintings on view at the Grunwald Gallery.

A new book by a retired Purdue University professor tells how she conquered a lifetime of self-imposed silence through singing.