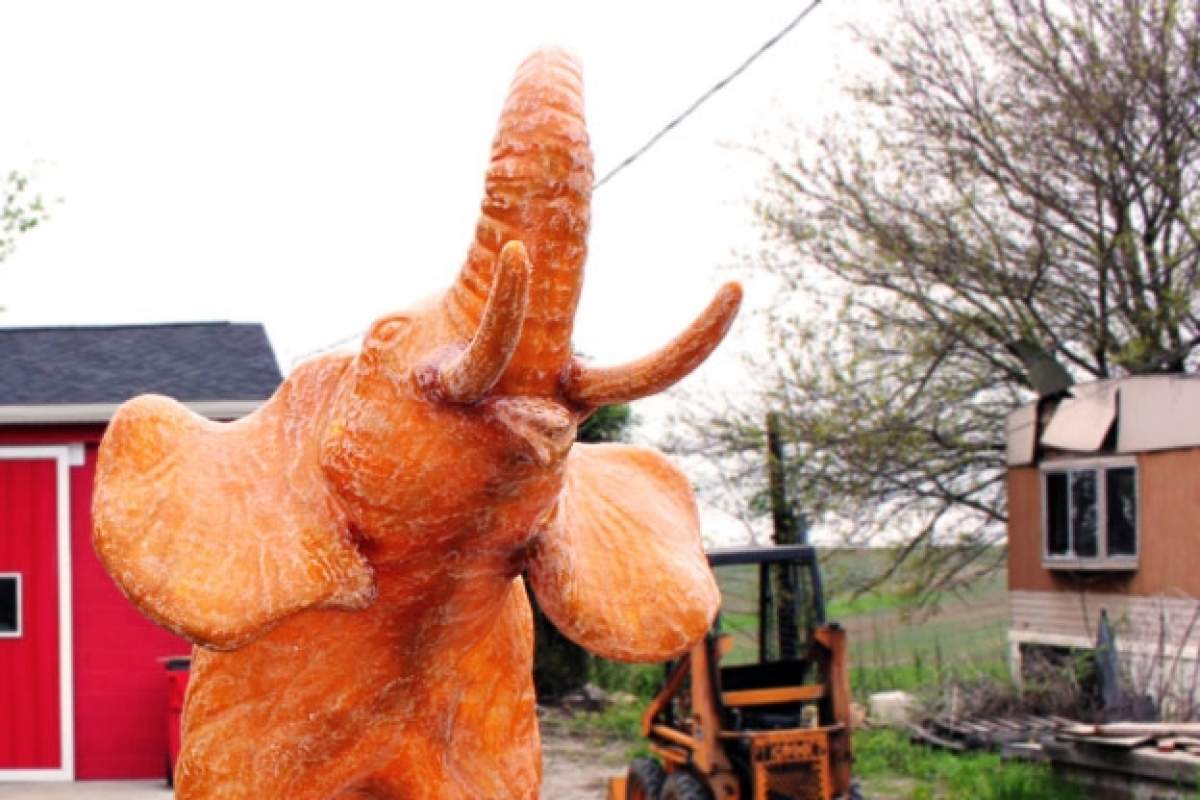 Drive down Fairfax road towards Smithville and you'll come across a parking lot filled with eighteen-foot tall giraffes, playful elephants, and even a fierce-looking gorilla.

All of these animals are made out of fiberglass by Ned Fleetwood, a recent transplant from Tennessee who turned to fiberglass sculpting in his retirement. After building his business in Tennessee, Fleetwood is trying to find a place for himself and his hulking animals in Bloomington.

From The Capital Of Kitsch To College Town

Fleetwood spent all of last summer getting his lot and workshop up to code so he could start a concrete and fiberglass statuary business.Â He put in drainage ponds and sidewalks, and refurbished an old barn into a modern workshop.

But he's a low-key guy, and Ned still thinks of his fiberglass sculptures as more of a hobby than anything else. "I'm retired from one job, and I just do this to have something to do, just see what happens," he says.

Ned makes more than twenty different animals out of fiberglass: mules, roosters, fish, hippos, and pigs-those are popular with bar-b-q joints. Â He's had success in the past few years selling his animals to businesses looking to enhance their storefronts. Â Lately, though, Ned's been feeling a little negative about the future of this business.

"I don't know how long it will last with the economy like it is, it slows down the tourists, and that's who buys these [statues]: petting zoos, drive-through safaris, putt-putt golf. When their business is slow, everybody else is too when it comes to something like this," Fleetwood says outside his Smithville workshop.

Fleetwood isn't sure about the future of his business, but he's had some success since moving to Indiana from Tennessee, home of road trip meccas Gatlinburg and Pigeon Forge.

The giant giraffes in front of the laser tag business on Bloomington's eastside are his, and his gorilla statue has even had the distinction of being part of a high school prank, when some kids stole the gorilla and put it in the flower bed at their high school.

Fiberglass sculptures had their hey-day in the 1960s, when Muffler Men and Paul Bunion statues towered over highways.

Recently, these advertising pieces have become an iconic part of American culture, with websites such as Roadside America dedicated to sniffing out this offbeat Americana.

Doug Kirby, who runs Roadside America, says that many towns are now using these iconic statues to lure tourists, who sometimes travel long distances to see them.

"It's interesting because they're sort of like, very blatant consumer symbols, these things were originally made to pull you in and buy something," he says.Â "But I think because they're big, especially when you see them in the Midwest or west, they're at that scale, where you're driving and not really seeing anything of interest and all of a sudden you see a giant Indian chief. It kind of brings a smile to your face."

Kirby is quick to point out that although the statues are now considered iconic oddities more than anything, the industry is not dying.

The fiberglass animals that can be found in cities around the country-horses in Louisville, pigs in Indianapolis-are a testament to the enduring interest in these attention-getting sculptures.

Ned Fleetwood is skeptical, but trying to stay positive. After all, with his sculptures displayed on the side of the road, he is his own best advertisement. He says that if "you take an eighteen foot tall giraffe, it'll get your attention. It even helps me with the concrete sales because it draws the kids who make the mothers and dads stop. Yeah, it's an attention-getter."

You may have heard about those fiberglass brains that Jill Bolte-Taylor is creating with artist Joe LaMantia. Ned Fleetwood is doing those too, after Bolte-Taylor saw his lot full of statues on her way home.