I'm Ready For My Jetpack! 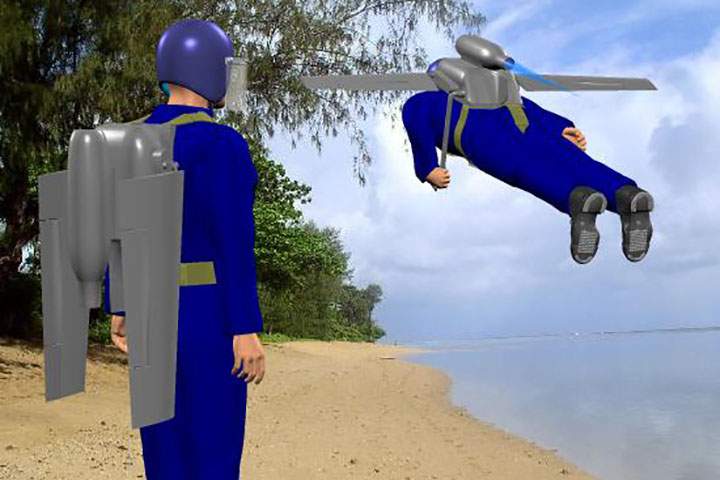 Planes, trains, and automobiles: these modes of transportation are old news. Me, Iâ€˜m ready to get my own jetpack and soar into the sky. And, in fact, it turns out that jetpacks that can work on Earth do actually exist!

So why hasnâ€˜t everyone ditched their cars for personal flying machines? In popular imagination, a jetpack is pretty straightforward. It straps to your shoulders like a backpack and boosts you into the air. Easy, right?

Your Body Ruins Everything!

Unfortunately, simple physics gets in the way. The human body is an ungainly, heavy thing, and unlike an airplane, we donâ€˜t make lift as we move through the air.

Airplanes work by the double power of their engines and wings: the jet engines thrust the plane forward, but itâ€˜s the wings that create lift, allowing the plane to get off the ground. Without aerodynamics on our side, humans have to rely solely on the thrust of the jetpackâ€˜s engines to provide lift and get us airborne.

This leads to the problem of weight. Creating enough thrust to counter the pull of gravity requires a lot of fuel, which makes the jetpack heavier, which means it requires more fuel, and so on.

Jetpack flights often require a whopping seven gallons of hydrogen peroxide fuel, adding weight and taking up serious space. Once a flight starts, that hydrogen peroxide reacts with a silver catalyst to shoot you into the air, creating steam at a temperature of 1,300 degrees Fahrenheit.

The result of all of this is that todayâ€˜s jetpacks are pretty heavy, usually only fly for 30 seconds, and are pretty dangerous. For now, at least, this means that jetpacks arenâ€˜t much more than science fiction.