Where Are The Giant Spiders? 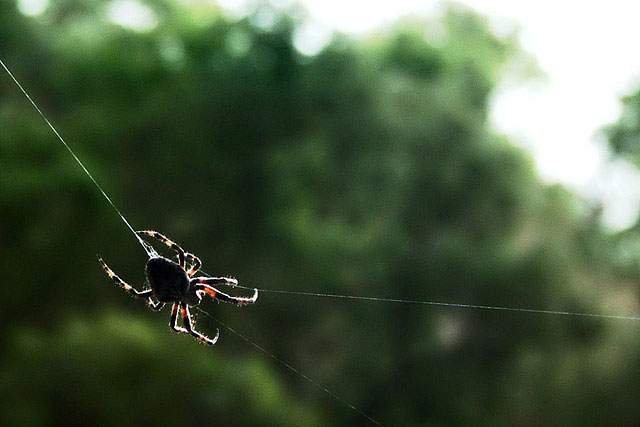 Old science fiction movies are forever warning us about the possibility of giant insects. You know the ones: a fifty-foot ant crawls out of a hole in the Nevada desert, or a series of bizarre murders are found to be the result of a rampaging roach. But when we look around the real world, we don't see insects getting anywhere near so large. Why not?

One of the most conspicuous reasons for a "growth ceiling" in bugs is the exoskeleton. Insects don't have internal bones the way people do: their hard supporting structures are all on the outside, and need to be shuffled off and rebuilt as the insect grows.

This process is called molting, and while it is taking place, the insect is in a precarious position. Without its protective outer layer, a small body will dry quickly--and drying out completely means death.

A much larger insect will have more internal water and thus more time to molt, but there's a catch: more water means more weight, and until it hardens, a soft new exoskeleton isn't able to support a very heavy body.

In fact, even a fully solidified exoskeleton isn't structurally capable of taking that much weight. Super-big insects would simply collapse. So the end result is an average between these two extremes--insects tend to appear in the proportions that allow them to have enough water to molt, but not so much as to become heavy.

One possible way to get around this, of course, is to live in the water itself, where you could float around while molting: and indeed, the fossil records show evidence of some arachnids in evolutionary history that did just this. These prehistoric super-scorpions were able to grow up to sizes of--hold your breath--almost six feet long.