I Could Write A Book: The Late Songs of Rodgers and Hart 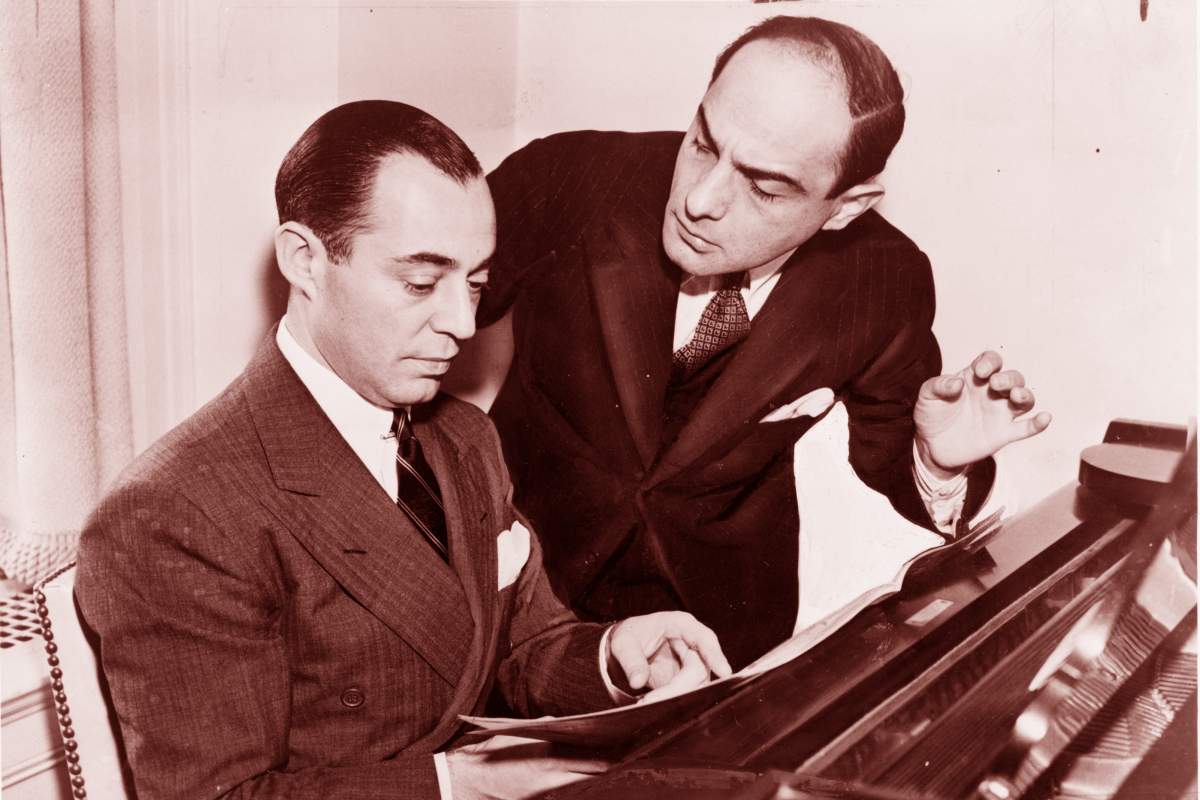 On this week's program, I'm continuing my look at the many songs of Rodgers and Hart, a songwriting duo that worked in Broadway and Hollywood in the 1920s, 30s, and early 1940s. On myÂ last Rodgers and Hart program, I discussed their early years, and on this one, I'll take a look at the later half of their partnership, after they returned to Broadway in the mid 1930s. Sadly, their partnership wouldn't last. Hart's lifestyle spun out of control, and he died in 1943. But during these years, they wrote some of their best songs, like "Bewitched," "My Funny Valentine," and "Where Or When." We'll hear them performed by Ella Fitzgerald, Tony Bennett, and more.

Dick and Larry were an unlikely pair. Richard Rodgers was fastidious and orderly, Lorenz Hart was mercurial and hot-tempered. But a beautifully crafted Rodgers melody flowed perfectly with a witty or heartbreaking Hart lyric.

In the mid 1930s, Rodgers and Hart had recently made their return to Broadway, after spending several years out west trying to make it as composers in Hollywood. The film musical industry was still in its infancy, while Broadway was booming. Their shows like the circus musical Jumbo and the jazz ballet On Your Toes had become hits, producing songs like "Little Girl Blue," "My Romance," and "There's A Small Hotel."

In 1937, their next musical was both a financial and artistic triumph. The musical Babes In Arms produced no less than five standards, including "My Funny Valentine," "Where Or When," "Johnny One Note," "I Wish I Were In Love Again," and "The Lady Is A Tramp."

The show was about a group of kids who put on a show to avoid being sent to a work camp. Babes In Arms was soon turned into a film starring Judy Garland and Mickey Rooney just two years later.Â More than any other Rodgers and Hart musical, Babes In Arms was rich with music that lived well beyond the run of the show on Broadway.

Rodgers and Hart continued to work at a breakneck pace after Babes In Arms came out in 1937. They followed it up with the political musical I'd Rather Be Right later that year, and the musical I Married An Angel in the beginning of 1938.

I'd Rather Be Right was theirÂ a political show written by Moss HartÂ (no relation) and George S. Kaufman, the same team behind Merrily We Roll Along and the Pulitzer Prize-winning playÂ You Can't Take It With You.Â I'd Rather Be RightÂ featured the song "Have You Met Miss Jones?", and the show starred George M. Cohan as President Franklin Roosevelt. In the show, Roosevelt intervenes with Miss Peggy Jones's love life, helping her get married.

Towards the end of 1938, Rodgers and Hart created the first significant musical to tackle a William Shakespeare play, that was the show The Boys From Syracuse, an adaptation of Shakespeare's The Comedy Of Errors.

The Syracuse in the show was the ancient Greek Syracuse, not the upstate New York Syracuse. And like Babes In Arms, it produced several memorable songs, including "Falling In Love With Love"Â and "This Can't Be Love."Â "This Can't Be Love" appeared 10 times on Your Hit Parade in 1938 alone.

Their follow-up toÂ The Boys From Syracuse was the George Abbott show Too Many Girls, all about a college football team. Popular songs from this show included "I Didn't Know What Time It Was"Â and "I Like To Recognize The Tune."

Larry Hart helped recruit the show's breakout star, a young Cuban singer by the name of Desi Arnaz. Hart had seen Arnaz perform at a nightclub in New York, and Hart was likely attracted to the good-looking young singer. The show Too Many Girls helped put Desi Arnaz on the map.

Too Many GirlsÂ was adapted into a popular film in 1940, which introduced the song "You're Nearer."Â A young actress named Lucille Ball starred in the film version ofÂ Too Many Girls.Â It was on that film set that she was introduced to the Cuban singer Desi Arnaz, who had moved from the Broadway show to the film. Two months later, the two were married. They ventured into television together a decade later.

By 1940, Rodgers and Hart were the undisputed kings of Broadway. They had written over a dozen smash hit musicals, their songs were running up the hit parade, and they were earning thousands of dollars in royalties every month. The success had a particular impact on Larry Hart, who quickly turned to a life of excess and booze once the cash started flowing in at the end of the 1930s.

He became increasingly unreliable at business meetings and rehearsals, but could still be counted on for a heartbreaking lyric, when he wasn't at the bar. Unfortunately, without Larry as a fully committed creative partner, the Rodgers and Hart shows often suffered. Their next show, Higher and Higher, was a disorganized flop that had only two redeeming qualities: one was the trained seal that performed on stage to the delight of audiences, and the other was the lovely song "It Never Entered My Mind."

Rodgers and Hart's next musical was the seedy nightclub musical Pal Joey, based on the sleazy but engaging low-life characters from writer John O'Hara's short stories. Pal Joey became one of the longest running Rodgers and Hart musicals, and starred Gene KellyÂ in his first breakout role. It also produced several of their most memorable songs, including "Bewitched, Bothered and Bewildered" and "I Could Write A Book."

Rodgers and Hart followed up Pal Joey in 1942 with the musical By Jupiter, a show based in a mythological matriarchal society. It wasn't an easy show to put together. Hart's drinking had become so severe by this point that he had to write part of the show from a hospital bed. But even still, he was able to churn out some fantastic songs, both broad and tender numbers, like "Ev'rything I've Got,"Â "Wait Till You See Her,"Â and the lovely ballad "Nobody's Heart."

The End Of Rodgers and Hart

By Jupiter would sadly be Rodgers and Hart's last production. Larry Hart had grown increasingly paranoid, irritable, and unreliable. When the next project came to the duo, Hart bowed out for good, unexpectedly telling Rodgers to find another partner. They had worked side by side for nearly 25 years.

Rodgers did find another partner in the established and mannered lyricist Oscar Hammerstein, and the rest is history. Rodgers and Hammerstein's first production was an adaptation of the play Green Grow The Lilacs, which became the musical Oklahoma. Oklahoma was a triumph when it opened in 1943.

A few months later, a forlorn Lorenz Hart went on a bender that sent him to the hospital. He died in November 1943 at age 48.