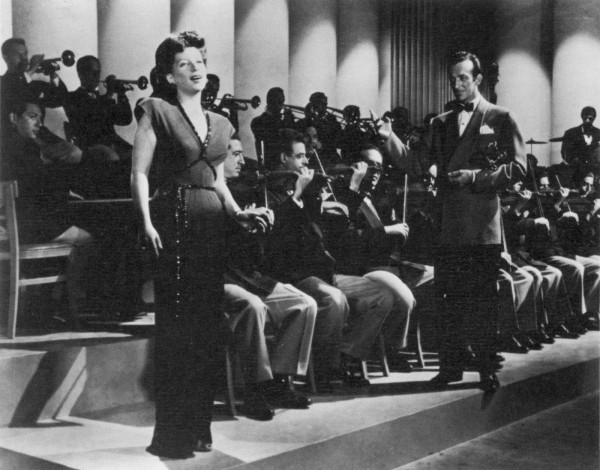 Singer Mel Torme once called Helen Forrest "the best band vocalist of the swing era," and jazz writer Will Friedwald says she "ranks with Bing Crosby and the Andrews Sisters as one of the definitive voices of the World War II era." Between 1938 and 1944 Forrest performed and recorded with three of the most popular acts of the big band years--Artie Shaw, Benny Goodman, and Harry James. On this edition of Afterglow we'll hear her with all three of those bandleaders, as well as recordings that she made with Lionel Hampton and the Nat King Cole Trio, singer Dick Haymes, and several of her late-1940s dates as a solo artist.

Breaking In With Artie

Forrest was born in Atlantic City, New Jersey in 1917; her father passed away when she was still a baby, and she had a troubled childhood growing up in Brooklyn. After getting some singing jobs on the radio as a teenager, she turned down a job offer from Ozzie Nelson, on the grounds that he already had one singer-his wife-who would undoubtedly get the best songs to sing.

Forrest eventually came to the forefront in 1938 with Artie Shaw, who also already had a singer in his band-Billie Holiday. But Holiday was unable to record with Shaw because of her recording contract with another label. Her status as a black vocalist in an all-white band also caused problems with racist audiences and venues, and Holiday left not long after Forrest joined.

It was not easy being the so-called "canary," or lead female singer, in a big band-women vocalists had to wear expensive gowns that they often had to pay for themselves, and Forrest was unable to sit down while onstage because of the elaborate dresses that she wore. Still, she flourished in the Shaw big band, and she was one of the very few singers whom Artie Shaw, who had little use for vocalists, respected. She possessed what writer Joseph Laredo described as "a warm, inviting voice that was equally at home with dreamy ballads and up-tempo material."

Putting Up With Benny

In November of 1939 Artie Shaw, fed up with the demands of the big-band business, walked offstage during a New York City hotel gig, and Helen Forrest found herself suddenly unemployed. She called up Benny Goodman, who had walked out on a performance of hers several years ago, and asked for an audition. Goodman needed a new singer at the time, and he now found Forrest, in the glow of her newfound stardom with Shaw's orchestra, a desirable hire.

Forrest went on to make more than 50 recordings with Goodman in the next two years, a number of them hits, but she would later say that her 20 months with Goodman "seemed like 20 years," calling him "by far the most unpleasant person I ever met in music." She finally left the bandleader in 1941, driven to irrevocable distraction by his habit of noodling on his clarinet behind her vocals and fed up with what she termed his "cold, inconsiderate" character. She was proud, however, of her recorded legacy with the so-called King of Swing.

After leaving Goodman in 1941, Forrest joined up with Harry James, one of his former trumpeters, now leading his own popular orchestra. She told James that she wanted more expansive singing spots within songs that the band performed, which James gave to her. James also proved to inspire a very different kind of intense response from Forrest than her former boss Goodman-quite the opposite, in fact. Ironically enough, Forrest had taken the place of James' wife, who was also a singer, when she joined the Goodman band. Her collaboration with James would yield a number of hits, as well as a passionate year-long relationship that Forrest later recounted in her memoir I Had The Craziest Dream.

At the height of Forrest's fame, with newspaper columnist Ed Sullivan (yes, he of later television fame) calling her "the Sinatra of femme singers," Forrest left James' band in 1944 to strike out on her own-following in the footsteps of other singers such as Frank Sinatra and Dick Haymes, who were trying to build a following based solely on their own star appeal. She also teamed up with Haymes for a series of duets that produced a number of hits in the mid-1940s.

Helen Forrest continued to pursue her solo career throughout the rest of the 1940s, recording frequently for MGM and Decca, but the success she found initially did not prove to be sustainable. The quality of her work remained high, however, and at the end of the decade she cut fifty short sides as radio transcriptions that feature her singing throughout nearly the entire length of each song, as opposed to many of her earlier big-band recordings that gave her only brief vocal opportunities.

Forrest's career petered out by the mid-1950s, but from then she was able to get by on the strength of recreating her big-band era repertoire. In 1982 she published an autobiography, I Had The Craziest Dream, that stands as one of the most captivating memoirs of the age of swing, and that told the story of her affair with Harry James. She died in 1999 at the age of 82. This program closes with something from Harry James in Hi-Fi, a 1955 album that brought Forrest and her former bandleader and lover back together, as Capitol Records attempted to capitalize, so to speak, on both the emerging hi-fi stereo phenomenon and the first wave of nostalgia for the big band era. James recreated many of his 1940s recordings with Forrest guest-singing on some, including the one that we'll hear, titled, appropriately enough, "I've Heard That Song Before."