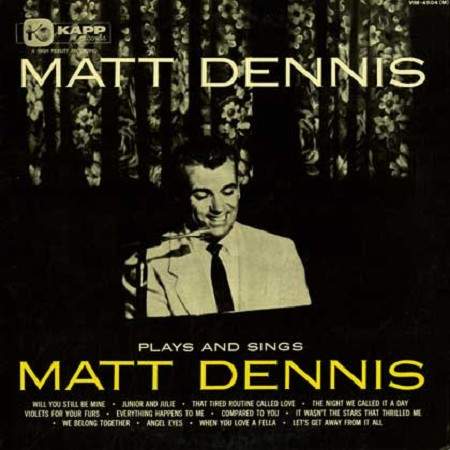 Songwriter Matt Dennis, as Afterglow founding host Dick Bishop has observed, "gave us only a handful of standards--but they were all we needed."

Dennis was born February 11, 1914 in Seattle, Washington, and grew up in a vaudeville family. He got his professional start in California in the 1930s, working with singers and small groups, and eventually teaming up with lyricist Tom Adair, who would provide the words for several of Dennis' most memorable songs.

Dennis and Adair got their big break with the Tommy Dorsey orchestra at the beginning of the 1940s, after singer Jo Stafford, who had listened to Dennis performing in Los Angeles nightclubs, introduced them to Dorsey. Dorsey ended up recording 14 of Dennis' songs in a relatively short span of time. Dorsey's singer Frank Sinatra kept several of the Dennis-Adair songs that he did with Dorsey in his repertoire for years to come.

During World War II Dennis worked for awhile with Glenn Miller's Army Air Force band, and got into radio after the war ended, eventually returning to California and performing in nightclubs from the late 1940s on. He recorded several albums under his own name, including Matt Dennis Plays and Sings Matt Dennis, which included some lesser-known Dennis songs that displayed both his lighter and more tenderly romantic melodic tendencies.

Singer Mel Torme and songwriter Gene Lees cited Dennis as an influence on their vocal and composing styles, respectively, and singer Julius La Rosa said that "Matt Dennis had an ability to write the most beautiful and sophisticated melodies, and yet they were never hard to sing. He was also a gentle, lovely man."