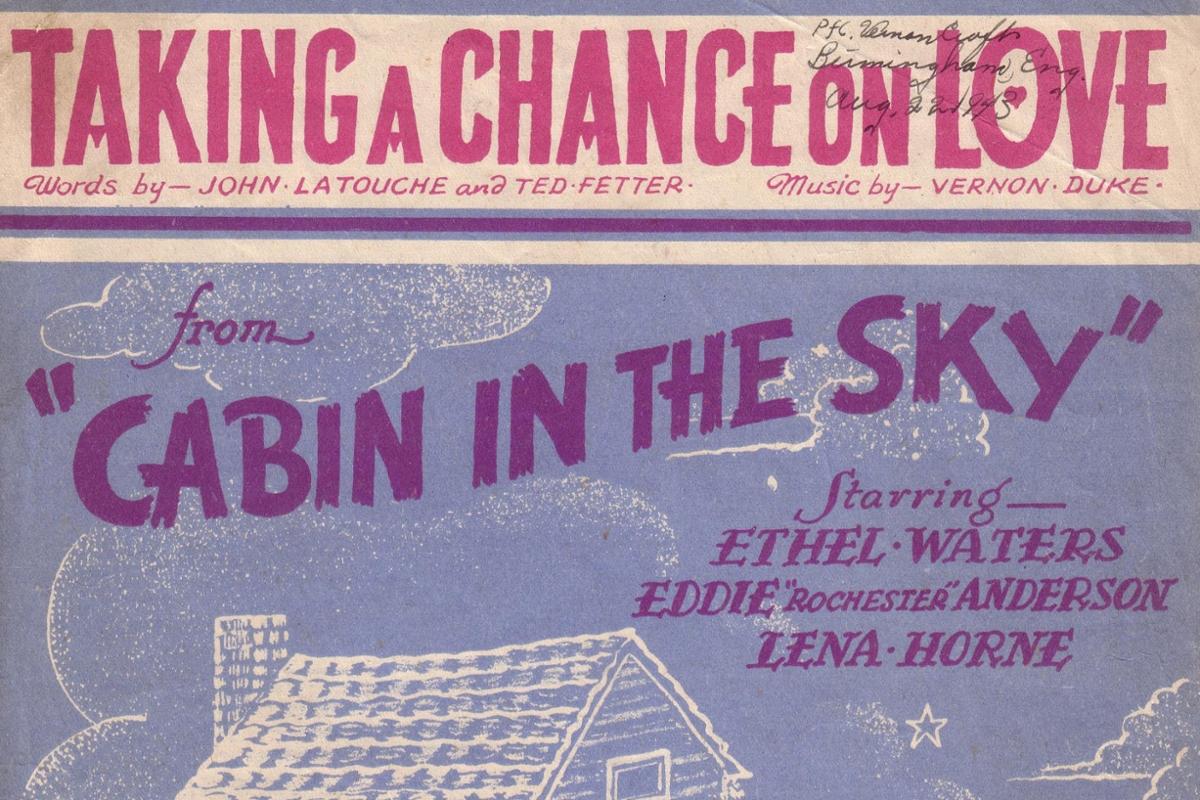 The songwriter Vernon Duke has one of the most interesting stories in American Popular Music. He started his life and career as a very serious—and successful—Russian classical music composer, before emigrating to America and taking this advice from George Gershwin: “Don’t be scared about going low-brow.” If anything, Duke elevated the craft of songwriting in America, and we have him to thank for such gems as “April In Paris,” “Autumn In New York,” and “I Can’t Get Started.” On this program, I’ll explore both the familiar and unfamiliar in the varied songbook of Vernon Duke.

The composer Vernon Duke lived dual lives. He was born Vladimir Dukelsky in Russia in 1903, where classical music became his passion. He studied at the Kiev Conservatory with the important Russian composer Reinhold Glière, and he began to write big romantic ballets, symphonies, and piano works.

But then when he was a teenager, Dukelsky’s family escaped the Russian Civil War and moved to Constantinople. There, he learned about Irving Berlin and George Gershwin, sparking a love for American Popular music.

In the 1920s, these two passions lived side-by-side. On the one hand, Dukelsky composed Parisian ballets alongside composer Igor Stravinsky at the famed Ballet Russes. He wrote piano sonatas for pianist Arthur Rubinstein, and had symphonies premiered by conductor Serge Koussevitzky. On the other hand, he spent time in New York, befriending George Gershwin, writing songs and adopting the American pen name of Vernon Duke.

By 1930, he mostly put his classical life behind him to focus solely on writing for the American stage. His early songs were mostly flops, forgotten tunes like “For Goodness Sake” or “I Am Only Human After All.”

But his first big hit came in 1932 in the Broadway musical Walk A Little Faster. During a springtime rehearsal, one of the actors mentioned Paris, which got Duke reminiscing about his time there. That memory spun out into a song which he called “April In Paris.” Lyricist Yip Harburg (who had never been to Paris) completed the lyrics, and it became part of the show. The show didn’t last long, but soon after, “April In Paris” was being performed in night clubs all around New York, cementing Vernon Duke’s legacy.

It took Vernon Duke a few more years to find another hit after “April In Paris,” but he stuck with it as a songwriter, creating individual songs and trying to get them in shows. One of those songs called “This Is Romance,” went through a few iterations before finally being recorded in 1933, by a couple different artists, including Al Bowlly, with Ray Noble and his Orchestra. After 1933, the song lingered in obscurity before being revived briefly by singer June Christy in 1946.

Vernon Duke and lyricist Yip Harburg collaborated several more times in the 1930s, trying to get lighting to strike twice after “April In Paris.” The two teamed up on several songs for the Ziegfeld Follies of 1934, the first show produced after its founder Ziegfeld had passed away. Several notable performers starred in this review, including Jane Froman, Buddy Ebsen, and Fanny Brice. And a few of Harburg and Duke’s songs became standards including “What Is There To Say?” and “I Like The Likes Of You.”

Later in 1934, Vernon Duke wrote a kind of follow-up to his song “April In Paris” for the Broadway musical Thumbs Up. It was called “Autumn In New York,” another season and place song, but this time Duke wrote his own lyrics. The lyrics are quite elegant, especially given that English was Duke’s second language and that he had only permanently settled down in the Big Apple five years earlier.

This song has been performed by a number of jazz singers over the years, including Ella Fitzgerald, Billie Holiday, Bing Crosby, and Frank Sinatra, who turned it into a hit in 1949.

In 1936, Duke was featured again as a composer in the famed Ziegfeld Follies, following up on his success with them from two years earlier. For the 1936 Follies, he contributed a couple of songs, like “Island In The West Indies,” “Words and Music,” and a song that’s now become one of his most famous, “I Can’t Get Started,” which he wrote with lyricist Ira Gershwin.

Gershwin’s original lyrics to “I Can’t Get Started,” which you can hear in Billie Holiday’s version, featured a few timely accomplishments for 1936, including charting the North Pole, flying around the world in a plane, and settling revolutions in Spain. In 1959, Frank Sinatra performed the song on his album No One Cares, updating the lyrics to something more timely for the late 1950s: designing the latest IBM brain.

Cabin In The Sky

Duke kept writing throughout the late 1930s, contributing songs to the Broadway review The Show Is On and The Goldwyn Follies of 1938. In that latter show, he was actually completing the songs of his friend George Gershwin, who had suddenly passed away in 1937.

But Duke’s biggest success came in 1940, on a show he worked on with lyricist John LaTouchecalled Cabin In The Sky. The show was based on the same play that later inspired the Rodgers and Hammerstein musical Carousel, but this show was set in the south, featuring an all-black cast and choreography by George Balanchine.

The showstopping number from Cabin In The Sky was a tune Duke had worked on with lyricist Ted Fetter, before having it punched up by John LaTouche. It was called “Taking A Chance on Love,” and the star Ethel Waters gave the song about a dozen encores on opening night.

Cabin In The Sky produced more hits beyond “Taking A Chance On Love,” including the title song (recorded by Ella Fitzgerald), “Honey In The Honeycomb” (recorded by Lena Horne), and “Do What You Wanna Do” (recorded by Diahann Carroll).

Vernon Duke never quite matched the success of Cabin In The Sky, but he continued to write for Broadway musicals through the 1940s and 50s, even into the 1960s.

His follow-up musical to Cabin In The Sky was called Banjo Eyes starring singer and comedian Eddie Cantor (who often went by the nickname “Banjo Eyes.”) Cantor introduced one of his signature tunes “We’re Having A Baby” in this musical, with lyrics by Harold Adamson.

Banjo Eyes also featured the song “Not A Care In The World,” with lyrics again by John LaTouche. This song was one of the first records made by Peggy Lee, after she joined Benny Goodman‘s orchestra at age 21. Other hits for Duke in the 1940s included the musical Sadie Thompson, which produced the song “The Love I Long For,” co-written by Howard Dietz and performed by singer Vaughn Monroe in 1944.

During World War II, Vernon Duke enlisted in the Coast Guard to fight for the Americans—having been born in Russia, Duke had a strong connection to the Allied Powers. He composed music for the war effort, including music for a Coast Guard revue show, and songs for Glenn Miller’s Army-Air Force Band like “There Are Yanks On The Banks of the Wabash.”

After the war, Duke’s life slowed down significantly. He continued to compose classical music under his given name of “Vladimir Dukelsky.” He had a ballet performed in San Francisco and his Third Symphony premiered in Boston. That’s in addition to his concertos that he had performed by big name classical musicians in the 1930s and 40s.

One of his last musicals came in 1952, the musical Two’s Company, which he wrote with lyricist Ogden Nash. This musical produced his last jazz standard, the song “Round About,” which has been performed by singers like Chris Connor.

Duke got married in 1957 to singer Kay McCracken, settling down writing songs, chamber works, poems, and memoirs. He passed away in Santa Monica, California in 1969 at age 65.