What’s in a name? Well, if you’re a songwriter from the golden age of the American Songbook… what’s in a name? It could be a song! This week on the show, we’re exploring names in titles of jazz standards, from Joe and Johnny, to Laura and Nancy. Our role call will include “Hardhearted Hannah,” “Bill Bailey,” “Stella By Starlight” and “Sweet Lorainne,” all performed by some other familiar names of American Popular Song, like Frank Sinatra, Nat King Cole, Ella Fitzgerald, and Billie Holiday.

It’s The Name Game, coming up next on Afterglow

Mark Chilla here on Afterglow. On this show, we’re exploring first names in songs from the Great American Songbook.

When a name shows up in a song, it’s rarely about a real person and often just the result of a good rhyme. That’s probably why “Joe” and “Marie” seem to show up more than just about any other name. Lots of rhyme potential.

However, on occasion, we know the person in question. That’s the case with the Frank Sinatra song “Nancy (With The Laughing Face).” The Nancy here was Sinatra’s daughter Nancy (although his wife was also named Nancy).

The tune was originally written by composer Jimmy Van Heusen and lyricist Phil Silvers, with help from Johnny Burke, but not as “Nancy.” Instead, it was “Bessie,” the name of Burke’s wife, presented to her as a birthday present. The songwriters ended up making this a kind of a birthday tradition, subbing in different names as the one with the laughing face, depending on who’s birthday it was. When it was little Nancy Sinatra’s birthday in 1944, it became “Nancy (With the Laughing Face).” Her father Frank was so moved by the gesture, thinking the song was written just for his daughter, that he recorded it for Columbia soon after, turning it into a top ten hit.

Here is Frank Sinatra in 1945 with “Nancy (With The Laughing Face),” on Afterglow

Frank Sinatra in 1945 and a tune he sang to his daughter and wife, both named Nancy. That was “Nancy (With The Laughing Face)” written by Jimmy Van Heusen and Phil Silvers.

Let’s continue looking at songs with female names in the title. This next one actually comes from an album featuring all songs with female names in the title. It was called Dedicated To You, released by Ray Charles in 1961. Lots of familiar favorites are on this album, including “Stella By Starlight,” “Nancy (With The Laughing Face),” “Sweet Georgia Brown,” and this next tune about a woman from Savannah G.A.

This is Ray Charles in 1961 with “Hard-hearted Hannah,” on Afterglow.

Chris Connor in 1957 with the Victor Young and Ned Washington song “Stella By Starlight.” The “Stella” in that song is a character in the 1944 film The Uninvited, a film for which Young wrote the music. And before that, the old 1924 song “Hard Hearted Hannah,” sung by Ray Charles in 1961 off of his album called Dedicated To You, which features all songs named after women.

Ray Charles wasn’t the only person who came out with an album of songs featuring female names. Balladeer Vic Damone did it the following year on his album The Lively Ones for Capitol Records, which included songs like Mitchell Parish’s “Ruby,” Johnny Mercer’s “Laura,” and Irving Berlin’s “Marie.”

Here’s that last song now. This is Vic Damone in 1962 with the song “Marie,” on Afterglow.

Two songs with a woman’s name in the title. That was Fats Waller in 1935 with the classic song “Dinah.” And before that, Vic Damone in 1962 with the song “Marie.”

Speaking of songs with a single woman’s name in the title… here’s another one from 1945. It was originally written by David Raskin as the theme to the 1944 film noir Laura starring Gene Tierney as the woman in question. Johnny Mercer later added lyrics to the haunting tune, turning into a standard performed by dozens of artists over the years.

Here’s a version by Billy Eckstine from 1952, and the song “Laura,” on Afterglow.

Tony Bennett on the 1965 album If I Ruled The World: Songs For The Jet Set, with Cliff Burwell and Mitchell Parish’s tune “Sweet Lorraine,” a signature song of Nat King Cole’s. Bennett actually dedicated that performance to Cole, who passed away just before that album’s release. Before that, Billy Eckstine with the Johnny Mercer and David Raskin tune “Laura.”

Coming up in just a moment we’ll hear more songs with first names in the title, this time songs with male names. Stay with us.

Of all the men’s names that show up in American popular song, “Joe” is by far the most common. Not only was Joe one of the most common names for about half of the 20th century, it also had the additional attribute of being incredibly easy to rhyme with. “Know,” “So,” “Go,” “Hello,” “Ago,” “Afterglow!”

Here are a pair of “Joe” songs now, beginning with Ella Fitzgerald and the Harold Arlen and Yip Harburg song “Happiness Is A Thing Called Joe,” on Afterglow.

Singer Nancy Wilson with the song “Joey Joey Joey,” from the Frank Loesser musical The Most Happy Fella. That comes from Wilson’s 1963 album Broadway - My Way. Before that, Ella Fitzgerald from her 1961 Harold Arlen Songbook album with Arlen and Harburg song “Happiness Is A Thing Called Joe.”

I told you there were a lot of songs with the name “Joe” in the title, and in fact, here’s one more, written by a guy named Joe and sung by Frank Sinatra. Sinatra actually originally recorded this next song back in 1949, and then re-recorded it here in 1961 with arranger Billy May.

This is Sinatra with the Joe Marsala song “Don’t Cry, Joe,” on Afterglow.

We’ve heard from Joe and Jim… what about John? The name “John” shows up occasionally in American Popular, although more frequently in its diminutive form “Johnny,” which seemed to be especially popular in the middle part of the 20th century.

This is Peggy Lee and the title song that she co-wrote with Victor Young, “Johnny Guitar,” on Afterglow.

Two Johnny songs. Just now, Anita O’Day and arranger Billy May in 1960 with the Rodgers and Hart song “Johnny One Note.” Before that, Peggy Lee in 1954 with her original song “Johnny Guitar.”

To close off this hour of songs all about peoples’ first names, let’s turn to the name Bill. Slightly less popular than Johnny, and certainly less popular than the ever-present Joe, but Bill does show up on occasion. In fact, a song simply titled “Bill” by Jerome Kern and P.G. Wodehouse is one of the earliest jazz standards, dating back to 1917, although popularized in 1927 in the musical Show Boat.

This is singer Helen Forrest with Artie Shaw’s Orchestra in 1939 with the song “Bill,” on Afterglow

Aretha Franklin in 1965, featuring Kenny Burrell on guitar, with the old Dixieland jazz standard from 1902 “Won’t You Come Home Bill Bailey.” Before that, Helen Forrest and Artie Shaw in 1939 with the Jerome Kern song “Bill.”

Thanks for tuning in to this Name Game edition of Afterglow. 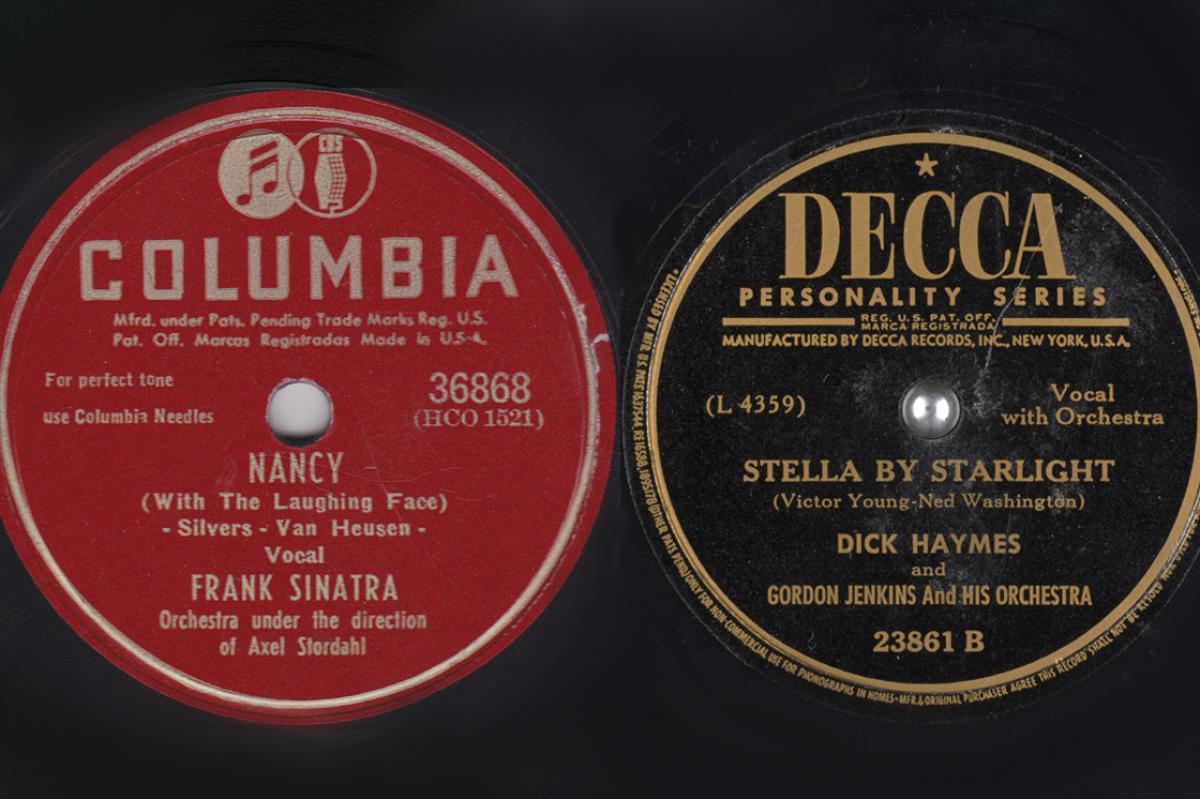 "Nancy (With The Laughing Face" and "Stella By Starlight"... just two of the names we're featuring this week! (Public Domain)

What’s in a name? Well, if you’re a songwriter from the golden age of the American Songbook… it could be a song! This week on the show, we’re exploring names in titles of jazz standards, from Joe and Johnny, to Laura and Nancy. Our role call will include “Hardhearted Hannah,” “Bill Bailey,” “Stella By Starlight” and “Sweet Lorainne,” all performed by some other familiar names of American Popular Song, like Frank Sinatra, Nat King Cole, Ella Fitzgerald, and Billie Holiday.