The Merriest!: A Swingin' Afterglow Christmas

It’s the holiday season once again, and so it’s that time of year to feature something the singers of the American Songbook are most known for: singing holiday tunes. On this program, I want to keep things light and fun, so I’ll be featuring only upbeat, rhythmic numbers to get you in the holiday spirit. We’ll hear winter and Christmas tunes, both sacred and secular, sung by some of your favorites, like Ella Fitzgerald, Frank Sinatra, Louis Armstrong and more.

It’s The Merriest: A Swingin’ Afterglow Christmas!, coming up next on Afterglow

Who says Christmas carols can’t swing? That was Mel Tormé in 1992 with a swingin’ version of the 19th-century carol “Good King Wenceslas.” Wenceslas was in fact a real person from 10th century Bohemia who braved the cold weather to help the poor at Christmastime, although during his life he only held the title of Duke, not King. That version comes from Tormé’s album for the Telarc label titled Christmas Songs, which also features a version of the famous tune he co-wrote called “The Christmas Song.” [:50]

Mark Chilla here on Afterglow. On this show, we’re swinging with some holiday tunes, both sacred and secular. Ahead, we’ll hear some snappy Christmas songs from folks like Frank Sinatra, June Christy, Louis Armstrong and more.

But first, I want to feature the singer who perfected the art of swingin’ Christmas, the one-and-only Ella Fitzgerald.

Her 1960 album Ella Wishes You A Swingin’ Christmas is one of the most iconic Christmas albums, and one of the most frequently heard around this time of year. The arrangements by Frank De Vol are timeless, Ella’s at the height of her game, and brings the perfect amount of holiday cheer to these secular holiday standards.

I’ll play two tracks from this album now, both relaying the tales of some fictional holiday figures. First up, here is Ella Fitzgerald with the 1949 Johnny Marks tune “Rudolph The Red-Nosed Reindeer,” on Afterglow.

Ella Fitzgerald in 1960 with two holiday tunes both introduced by country singer Gene Autry. Just now, that was “Frosty The Snowman,” a song written by Walter Rollins and Steve Nelson in 1950. Before that, “Rudolph The Red-Nosed Reindeer,” written by Johnny Marks the previous year, 1949. Both of those songs come from her famous LP Ella Wishes You A Swingin’ Christmas, which we’ll hear more of at the end of the hour.

That LP of all secular holiday tunes wasn’t Fitzgerald’s only Christmas album. Seven years later, Ella made an album of all sacred Christmas songs titled Ella Fitzgerald’s Christmas. “Swingin’” is not the term I’d use to describe these straightforward and beautifully presented arrangements of traditional carols. However, one carol is injected with the slightest bit of shuffling swing, and so I’ll play that for you now. It also features one of the best reharmonizations of a Christmas carol that I know of, which you’ll hear in the chorus.

Here is Ella Fitzgerald and arranger Ralph Carmihcael in 1967 with “We Three Kings,” on Afterglow

One of the coolest reharmonizations on that “star of wonder” section. That was Ella Fitzgerald and arranger Ralph Carmichael in 1967 with the traditional carol “We Three Kings.”

We’re exploring swingin’ Christmas tunes this hour, and let’s pick things up a bit with one of the swingingest voices from the 1950s, Kay Starr. In 1950, she introduced the world to a new swingin’ holiday tune about Santa Claus called “Everybody’s Waitin’ For The Man With The Bag.” This song has become a popular tune for artists to cover more recently, however, Starr’s iconic version basically remained unchallenged for about 50 years.

Here is Kay Starr in 1950 with the Dudley Brooks, Irving Taylor, and Harold Stanley tune “Everybody’s Waitin’ For The Man With The Bag,” on Afterglow

MUSIC - KAY STARR, “(EVERYBODY’S WAITIN’ FOR) THE MAN WITH THE BAG”

MUSIC - JO STAFFORD, “I’VE GOT MY LOVE TO KEEP ME WARM”

Three swingin’ holiday tunes from some of the best traditional pop singers of the 20th century. Just now, we heard June Christy with the song “The Merriest” by Connie Pierce and Arnold Miller, written for Christy for her 1961 holiday album This Time of Year. Before that, Jo Stafford with the Irving Berlin song “I’ve Got My Love To Keep Me Warm.” That comes from her 1956 holiday album Ski Trails. And starting that set, Kay Starr in 1950 with her original version of the Santa-themed song “Everybody’s Waitin’ For The Man With The Bag.”

Let’s turn back the clock even more and hear a couple of swingin’ holiday tunes performed by some actual swing bands from the 1940s. First up, a top 10 hit for Glenn Miller and His Orchestra in December 1941, featuring the vocal stylings of Tex Beneke, The Modernaires, and some Mexican-flavored vocals by Ernie Caceres. This is Glenn Miller with “Jingle Bells,” on Afterglow.

Two swingin’ Christmas tunes, both from the year 1941. Just now, we heard Benny Goodman and His Orchestra, featuring Peggy Lee and Art Lund on vocals with the original recording of the Ted Shapiro tune “Winter Weather.” Before that, a much older song, the familiar “Jingle Bells,” written by James Pierpont in 1857, and performed there by Glenn Miller in 1941. Tex Beneke was the primary vocalist there, along with Ernie Caceres and The Modernaires.

Here’s another familiar holiday favorite, although one written about 80 years after “Jingle Bells” and performed about 25 years after those last recordings. It comes from Tony Bennett’s 1968 album Snowfall, his first Christmas album and another iconic one this time of year.

Here’s Tony Bennett with the Felix Bernard and Richard B. Smith tune “Winter Wonderland,” on Afterglow.

Tony Bennett with a swingin’ version of the familiar “Winter Wonderland.” That comes from his iconic 1968 Christmas album Snowfall.

Coming up in just a bit, we’ll have more swingin’ holiday tunes. Stay with us.

Welcome back to Afterglow, I’m Mark Chilla. We’ve been exploring some swingin’ holiday tunes for the winter and Christmas season.

Let’s turn now to Mr. Frank Sinatra. Believe it or not, Sinatra didn’t record too many swingin’ Christmas tunes. I guess that “Ring-A-Ding-Ding” spirit didn’t really apply to those Christmas bells. His first Christmas album, Christmas Songs By Sinatra, a collection of 78s released in the late 1940s, featured mostly ballads and carols, like “Silent Night,” “White Christmas,” and “It Came Upon A Midnight Clear.” The same goes for his 1957 album A Jolly Christmas With Frank Sinatra—mostly slower songs like “The First Noel,” “I’ll Be Home For Christmas,” and “Adeste Fideles.”

However, Mr. Sinatra could still turn up the heat in the wintertime. Let’s hear some of those very few swingin’ holiday tunes now. First up, here he is in 1947, off of that first compilation album Christmas Songs By Sinatra. This is Frank Sinatra with the J. Fred Coots and Haven Gillespie song “Santa Claus Is Coming To Town,” on Afterglow

Two of only a handful of swingin’ Christmas tunes by Mr. Frank Sinatra during his Columbia years. Just now, that was him in 1950 alongside the B. Swanson Quartet with the Jule Styne and Sammy Cahn song “Let It Snow! Let It Snow! Let It Snow!,” and before that, in 1947 with the J. Fred Coots and Haven Gillespie song “Santa Claus Is Coming To Town.”

Let’s turn now to some Christmas songs by Mr. Jazz himself, Louis Armstrong. “Pops” sang the occasional holiday standard—for instance, he has a nice version of “Winter Wonderland” and “White Christmas” with the Gordon Jenkins Orchestra, for instance, both from 1952. But more often than not, Armstrong recorded the obscure novelty Christmas song. Let’s hear two of those now. We’ll start with a tune written by songwriter and television personality Steve Allen, whose birthday falls the day after Christmas.This is Louis Armstrong and the Commanders in 1953 with “Cool Yule,” on Afterglow.

A couple of more obscure Christmas songs sung there by Louis Armstrong. First in that set was Louis and the Commanders in 1953 with the Steve Allen song “Cool Yule.” And just now, we heard a tune written way back in 1934 by lyricist Mitchell Parish and composer Raymond Scott (the guy who wrote most of your favorite cartoon soundtracks). That was “Christmas Night In Harlem.” “Christmas Night In Harlem” was the B-side of a Decca single by Louis in 1955, featuring the Dick Sherman and Joe Van Winkle song “Christmas In New Orleans” on the A-side.

Speaking of New Orleans—and guys named Louis—I want to play an even more obscure swingin’ Christmas song for you now, performed by Louis Prima and his New Orleans Gang back in 1936. This comes from a fun compilation CD called Santa Claus Blues.

This is Louis Prima with “What Will Santa Claus Say (When He Finds Everybody Swingin’?),” on Afterglow.

MUSIC - LOUIS PRIMA AND HIS NEW ORLEANS GANG, “WHAT WILL SANTA CLAUS SAY (WHEN HE FINDS EVERYBODY SWINGIN’?)”

Louis Prima and his New Orleans Gang in 1936 with a novelty song he wrote called “What Will Santa Claus Say (When He Finds Everybody Swingin’?).”

I want to close off this hour of swingin’ Christmas tunes by returning to one of my favorite swingin’ Christmas albums and playing something a little more familiar. Here again is Ella Fitzgerald in 1960 from her marvelous album Ella Wishes You A Swinging Christmas.

This is the holiday standard by classical composer Leroy Anderson and lyricist Mitchell Parish: “Sleigh Ride,” on Afterglow.

The familiar “Sleigh Ride” performed there by Ella Fitzgerald in 1960 on her Verve LP Ella Wishes You A Swinging Christmas.

And now let me wish you a swingin’ Christmas. Thanks for tuning into this holiday edition of Afterglow

A little Duke Ellington in the background right now. Next week on the program we’ll continue looking at holiday tunes, but we’ll turn down the volume, playing some of the best quiet, contemplative ballads by your favorite songbook singers. I hope you’ll tune in. 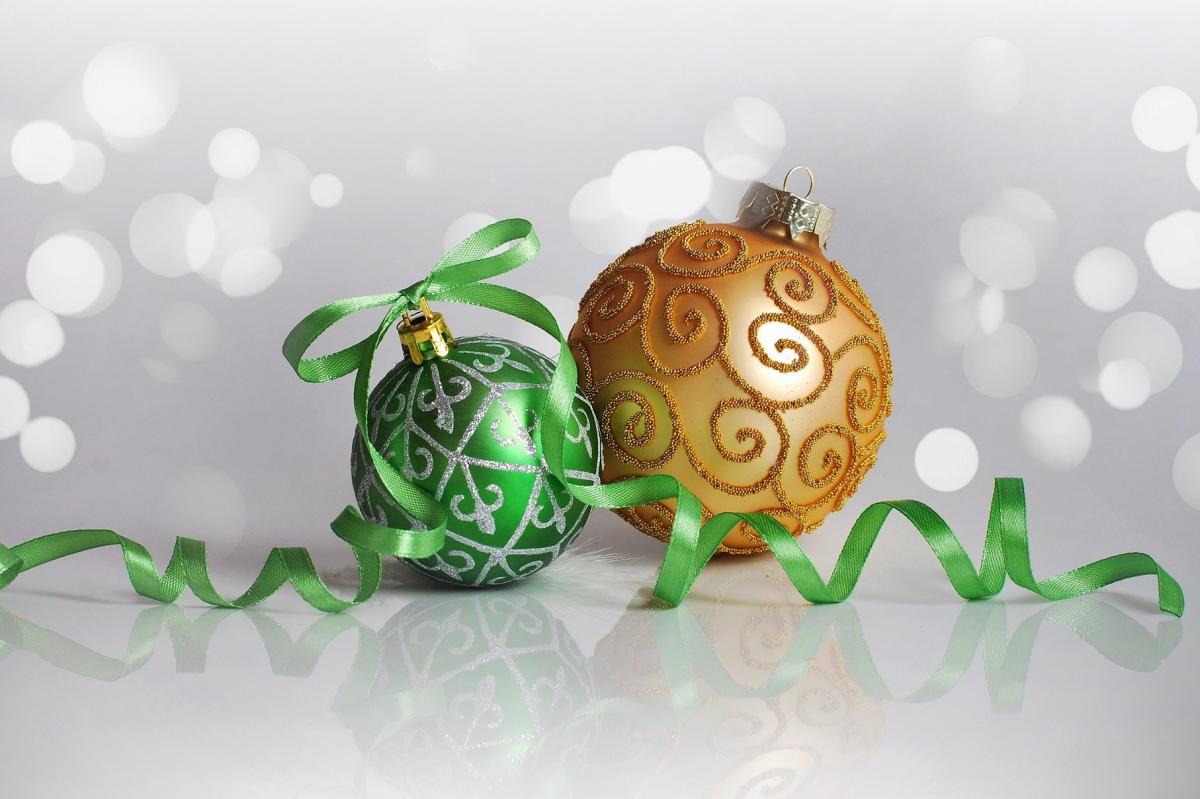 It’s the holiday season once again, and so it’s that time of year to feature something the singers of the American Songbook are most known for: singing holiday tunes. On this program, I want to keep things light and fun, so I’ll be featuring only upbeat, rhythmic numbers to get you in the holiday spirit. We’ll hear winter and Christmas tunes, both sacred and secular, sung by some of your favorites, like Ella Fitzgerald, Frank Sinatra, Louis Armstrong and more.