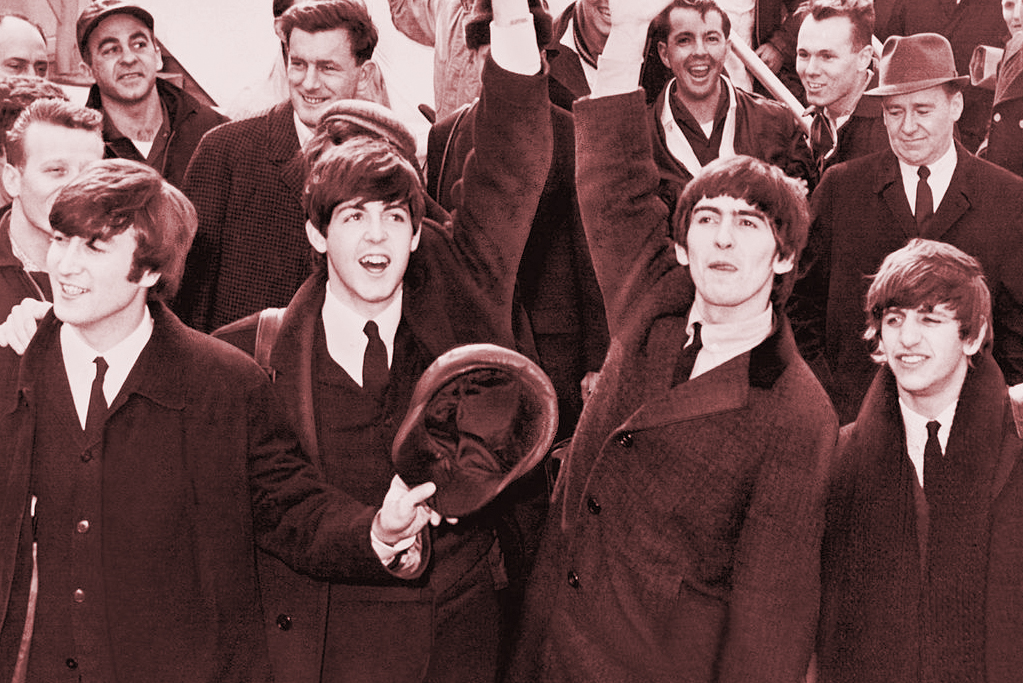 In 1964, there was a seismic shift in American music. The Beatles had arrived, which not only opened the doors to the British invasion, but also shifted pop music's focus away from singers and onto rock bands-rock bands who also wrote their own music. But there was no denying the Beatles' skill as songwriters. This week on the program, we'll explore some jazz and traditional pop treatment of Beatles songs, from some very early Beatles covers by Ella Fitzgerald and Keely Smith in 1964, to some more recent covers from this century.

The title "The Lennon/McCartney Songbook" isÂ sort of a lie and also sort of a joke about one particular Beatles cover on the this playlist. Messieurs John Lennon and Paul McCartney, while they did write the lion's share of Beatles song, were not the only songwriters in the group. Ringo Starr wrote on occasion, and towards the end of the 1960s, George Harrison was writing some of the Beatles' best songs.

Not everyone was aware of that fact though, including Mr. Frank Sinatra.

Sinatra and the Beatles had a complicated relationship. In the early 1940s, hoards of Sinatra-loving teenager bobby-soxers created a "Sinatramania," so when "Beatlemania" came around 20 years later, Frank was not impressed (and probably a little jealous). He even insulted the Fab Four in the famous Gay Talese Esquire article "Frank Sinatra Has A Cold" from 1966, calling them, quote "kid singers wearing mops of hair thick enough to hide a crate of melons."

Years later, Sinatra would bury the hatchet and started performing Beatles song, including the song "Something" from Abbey Road. He loved the song, calling it one of the best love songs from the past 50 years. But he also mistakenly referred to "Something" as his favorite "Lennon/McCartney" tune, when it was in fact 100% a George Harrison tune.

Sinatra's version from 1979, backed up by an arrangement by Nelson Riddle, is one of his best recordings, and he entirely makes the song his own.

It wasn't his only Beatles cover in his career, either. Years earlier, Sinatra recorded a version of "Yesterday" on hisÂ 1969 album My Way, which featured a number of more contemporary rock songs, like Simon and Garfunkel's "Mrs. Robinson" and Ray Charles's "Hallelujah I Love Her So."

"Yesterday" was the most obvious choice for Sinatra's first Beatles cover. It was seen as a watershed moment in the Beatles career, evidence that these young lads could write ballads as compelling as any of the great songwriters. "Yesterday" would go on to become the most covered song of all-time, not just by the Beatles, but by any artist.

While Sinatra was slow to adopt the Beatles music into his repertoire, Ella Fitzgerald started singing their songs almost immediately. An early American hit for the Beatles was "Can't Buy Me Love," released in March of 1964, just a month after they performed on Ed Sullivan. Less than 3 weeks after that release, Ella Fitzgerald was in the studio cutting her own version of "Can't Buy Me Love" as a single, which became a minor hit in the UK.

It helps that "Can't Buy Me Love" is essentially a blues, a style Ella was more than comfortable singing.Â Later on in 1964, Ella even released an original song called "Ringo Beat" all about this new Fab Four phenomenon

Keely Smith was another jazz artist who recorded the Beatles music shortly after the Beatles went mainstream in American with their filmÂ A Hard Day's Night. Her 1964 albumÂ Keely Smith Sings The John Lennon - Paul McCartney SongbookÂ included 11 Beatles songs, plus the song "A World Without Love," recorded by the British duo Peter and Gordon but written by Lennon/McCartney.

They weren't the only jazz artists who recorded Beatles songs early on, either. Peggy Lee recorded a version of "A Hard Day's Night" in 1965, as did Quincy Jones. The Ramsey Lewis Trio brought "A Hard Day's Night" into their repertoire in early 1965 (Lewis would later record an entire album called Mother Nature's Son based on songs from the Beatles' "White Album," and released just weeks after the "White Album" debuted in 1968). And Count Basie recorded a whole album of Beatles' songs in 1966 calledÂ Basie's Beatle Bag. Besides this vanguard, jazz musicians were relatively slow to pick up on the Beatle phenomenon, at least compared to pop stars.

Soul Jazz and The Beatles

Some more soulful jazz artists also covered the Beatles in the late 1960s/early 1970s, including Ray Charles and George Benson. Charles recorded about half a dozen Beatles songs, including "Something" and "Yesterday," and Benson recorded an entire album called The Other Side Of Abbey Road, just a few months after the release of the Beatles' Abbey Road.

Aretha Franklin embraced the Beatles in the early 1970s, too. In 1970, she recorded a version of "Eleanor Rigby," where she embraced the main character by claiming "I'm Eleanor Rigby." On that same album, This Girl's In Love With You, she recorded a soulful version of the new Beatles' hit "Let It Be."Â In 1972, not long after the Beatles broke up, Franklin also added the song "The Long And Winding Road" to her repertoire.

Jazz and the Beatles, The Later Years

As the years went on, other jazz and traditional pop artists from the earlier generation also embraced the Beatles, some more successfully than others. Sarah Vaughan, for instance, released an entire album of Beatles songs in 1981. It features arrangements by Marty Paich and his son David Paich (along with members of Paich's new band Toto). A few songs like "Here There And Everywhere" and "Blackbird" are OK, but most the arrangements range from overly maudlin to downright bizarre.

Much more successful was Tony Bennett, who recorded several Beatles songs on his 1971 album Tony Sings The Great Hits of Today: "Here There And Everywhere," "Something," and "Eleanor Rigby." He would also record "The Long And Winding Road" a year later.

More recently, many contemporary jazz singers have made some creative reimagining of Beatles songs.Â

Kurt Elling created a stirring version of the Beatles' mysterious song "Norwegian Wood" on his 2011 Grammy-nominated album The Gate. Cassandra Wilson, who has been known to expand the definition of a "jazz standard," recorded a soulful version of the Beatles "Blackbird" onÂ her 2010 album Silver Pony. AndÂ Madeleine Peyroux on her 2011 album Standing On The Rooftop created a charming version the Beatles' "Martha My Dear," originally written as an ode to Paul McCartney's sheepdog Martha.