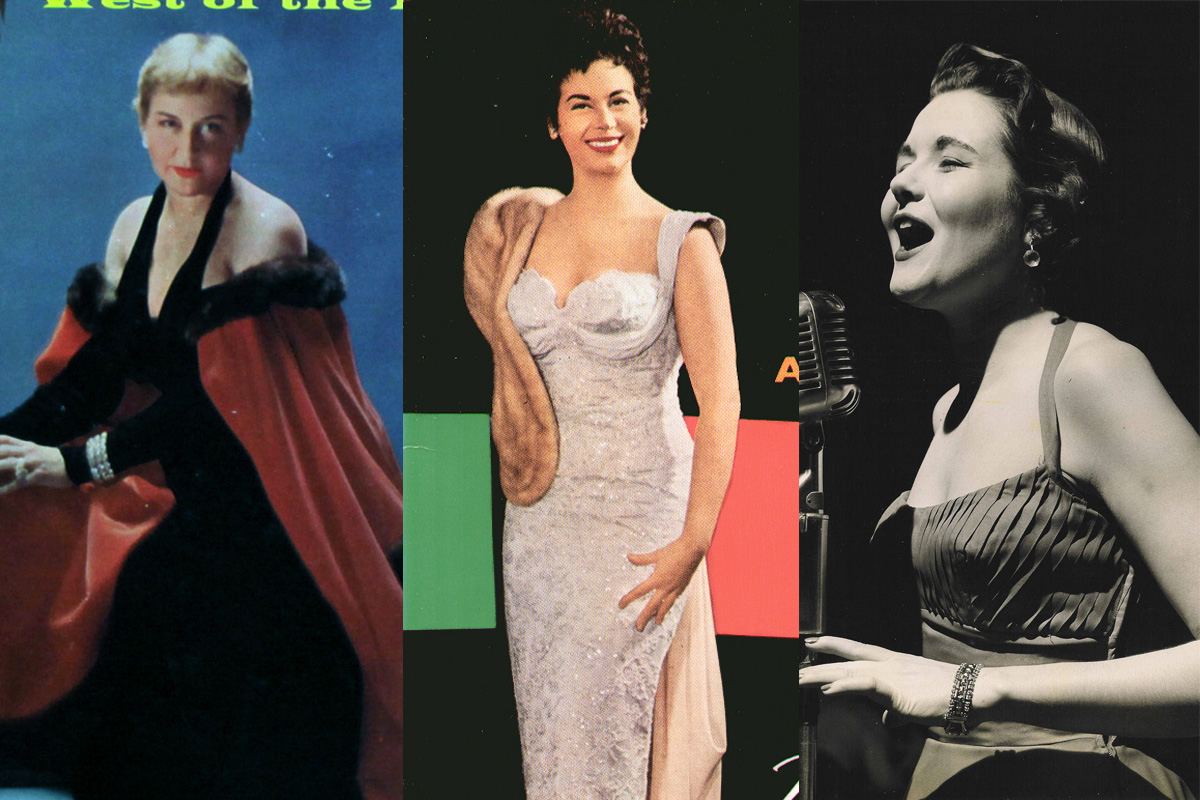 In the early 1950s, torch singer Lee Wiley, on the waning end of her career, began to work in Boston in a club called Storyville, owned by jazz impresario George Wein. It was at Storyville that she began to influence two young singers - Teddi King and Barbara Lea - who would go on to form careers of their own. This hour, we'll hear the music of Wiley, King, and Lea, and learn more about the Boston club that connected them all.

Wiley was born in Oklahoma sometime around the year 1908-like many singers from this era, she wasn't entirely forthcoming about her true age. She moved to St. Louis and then to New York, where she began to make a name for herself as a singer. She possessed a smoky voice with a good jazz sense and elegant diction, all of which made her famous in the 1930s, competing for radio play against Mildred Bailey, Kate Smith, and Connee Boswell.

When the swing era hit, Wiley's laid-back voice was ill-equipped. Instead, she created a career for herself as a sultry torch singer. In the late 1930s and early 1940s, Wiley recorded what's thought to be the very first "songbook" albums, 78 RPM records of tunes by a single composer, including George Gershwin, Rodgers and Hart, Cole Porter and others. Wiley continued to perform in the 1940s with several different artists, including her husband pianist Jess Stacy, and her lover, bandleader and composer Victor Young (Wiley's love life is the stuff of legend).

By the 1950s, Wiley's star had mostly faded. She never caught on with the swing era, her best recordings were for smaller labels and lacked distribution, and had already spent 20 years in show business. However, she was still a cult figure among certain jazz aficionados, including a 25-year old pianist and jazz promoter from Boston named George Wein.

Wein is probably most well-known for helping to create the Newport Jazz Festival, but before that in 1950, he started a new nightclub in Boston called Storyville. To help get Storyville off the ground, he invited Lee Wiley to perform a two week stint at the club in September of 1951, to be broadcast on the radio. Wein himself accompanied her, and many were in attendance, including Johnny Mercer.

Wiley's Storyville set marked a resurgence for the singer. Now nearly 50 years old, Wiley recorded several studio albums with the help of George Wein, including West Of The Moon and Night In Manhattan. These albums would prove to be the finest of her career.

Wiley's stint in Storyville had another impact as well. Her presence as a seasoned jazz star in Boston had an impact on the next generation of singers to come out of New England, namely Teddi King and Barbara Lea. Teddi King turned 21 the day before Wiley's opening night at Storyville, although her career was already off to a good start. The Boston native had already recorded with bandleader Nat Pierce, a fellow New Englander, and she was beginning to appear on the radar of George Wein, who would end up guiding her career for much of the 1950s.

By 1951, Teddi King was becoming more well-known around the Boston area, making regular appearances at George Wein's nightclub Storyville. It was at Storyville that King was introduced to pianist and bandleader George Shearing, after opening for the band in the early 1950s. Shearing invited the 22-year old singer to tour with the band in the summer of 1952. Shearing worked with many famous vocalists throughout the years, including Nat King Cole, Nancy Wilson, and Peggy Lee-but only one singer toured with Shearing, and that was Teddi King.

King's career flourished in the 1950s, mostly thanks to the support of George Wein. After opening the club, one of the first things Wein did to expand his Storyville empire in Boston was to try his hand at a record label.

The Storyville label was short-lived, but it did feature a few big names, including Lee Wiley, trombonist Bob Brookmeyer and trumpeter Ruby Braff. Teddi King's very first sessions as a solo artist were for this Storyville label, and included albums like Miss Teddi King and Now In Vogue. King would move to RCA Records in the late 1950s, but like Wiley, her career faded after 1960. Teddi King passed away from lupus far too young in 1977.

Barbara Lea was nowhere near as well known as the other two singers, Lee Wiley and Teddi King, but she had an excellent voice for jazz-it's only a shame that she came of age at a time when jazz singers were beginning to decline in popularity.

Barbara Lea, born in Detroit, moved to Boston around the year 1950 for same reason that many 18-year-olds move to Boston: to go to college. She studied music theory at Wellesley College, and began to get more and more involved in the jazz scene there, frequenting George Wein's Storyville nightclub. In fact, during Lee Wiley's famous stint had headlining Storyville in 1951, Barbara Lea was there, as the young girl at the front door charging admission. No doubt that she learned something from the elder Wiley on those dates, because they are remarkably similar in their tone.

Barbara Lea's finest recordings come from the mid 1950s, a series of a records she made with trumpeter Johnny Windhurst and his quintet. By the end of the 1950s, Barbara Lea, as well as Teddi King and Lee Wiley, had all faded out of the spotlight almost completely. In the 1970s, both Wiley and King passed away-King, far too soon-but Barbara Lea continued her career until 2011, taking on the role of an intellectual jazz professor of sorts, and the keeper of a torch-singer style that was mostly forgotten.