The Standards of Sondheim and Bernstein 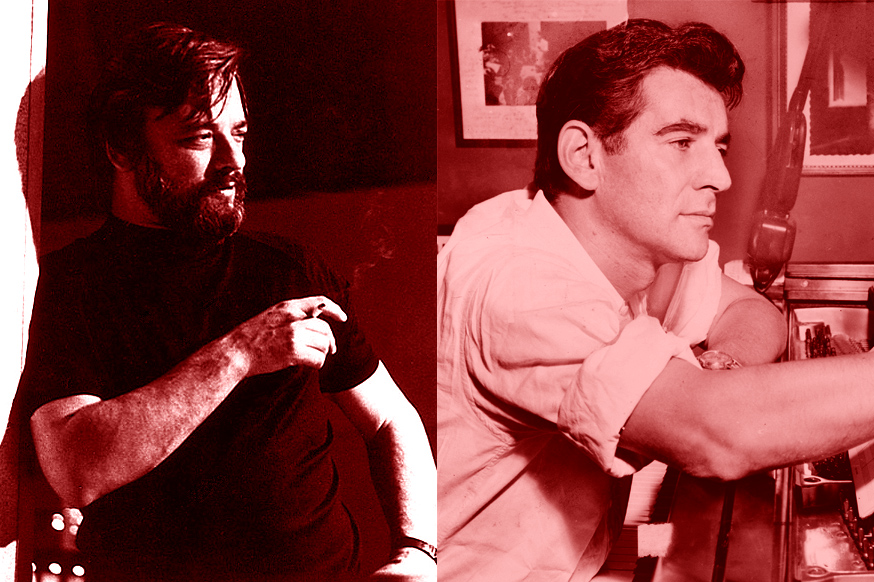 This week on the program, we turn the spotlight on two of the most innovative and influential figures in postwar musical theatre: Stephen Sondheim and Leonard Bernstein. Their two careers intersected just once, with West Side Story, but they both pushed the boundaries of musical theatre, and left an indelible impact upon the Great American Songbook. We'll look at many of their standards performed by different jazz and popular song artists, including Tony Bennett, Kurt Elling, Sarah Vaughan, and more.

Leonard Bernstein lived simultaneously in many musical worlds. He composed for the stage, both light and serious works like On The Town, West Side Story, and Candide. He was also a towering voice in 20th-century classical music, serving as the music director of the New York Philharmonic, composing orchestral, choral, and chamber works, and lecturing on the topic prominently on television. Yet, Bernstein's music also had a junction with jazz, perhaps no more evident than in one of his very first works, the ballet Fancy Free from 1944.

Instead of an orchestral prologue, Bernstein imagined a pre-recorded jazz-blues number in the style of Billie Holiday to played from the speakers during the performance. When the ballet premiered, Bernstein didn't have enough clout to actually get Holiday involved. But the buzz around his name quickly grew after the ballet's premiere, and when the work was recorded for Decca a few months later, where Billie Holiday was also signed, it was Holiday who recorded his song. Holiday recorded the song "Big Stuff" several times over the next 18 months, experimenting with different string arrangements. The final version was recorded in March of 1946 with a more traditional jazz ensemble.

The success of Bernstein's ballet Fancy Free put Bernstein on the map, and soon put him in touch with lyricists Betty Comden and Adolph Green to work on his first musical On The Town. On The Town proved to be a hit on Broadway. It inspired a film version a few years later, and several of the songs, including "New York, New York" (not to be confused with Kander and Ebb's "The Theme from 'New York New York', made famous by Frank Sinatra), "Lucky To Be Me," "Lonely Town," and "Some Other Time," soon became jazz standards performed by Frank Sinatra, Mel TormÃ©, Blossom Dearie, Tony Bennett, and many others.

Many other Bernstein songs from his 1940s and 1950s musicals have worked their way into the jazz standard repertory, including "It's Love" from 1953's Wonderful Town, and "Who Am I?" from the 1950 musical adaptation of Peter Pan, recorded by Nina Simone and others.

Choreographer Jerome Robbins, who worked with Bernstein on the ballet Fancy Free, came to Bernstein a few years after the ballet with an idea about an adaptation of Romeo and Juliet, set in modern day New York City. Arthur Laurents was tasked with writing the book, and he brought on board a young songwriter still in his 20s to write the lyrics by the name of Stephen Sondheim. Sondheim at the time was more interested in working on his own material, rather than assisting in someone else's project. But his mentor Oscar Hammerstein convinced him that it would be a good learning experience, so he joined the creative team of what would become West Side Story.

The musical and subsequent film were smash hits, and several of the songs like "Cool," which combined jazz rhythms with the melodic angularity of modern classical, became standards in the Great American Songbook. But even a song like "I Feel Pretty," which was written in a typical AABA song form and ignored any of the hipness of West Side Story's other tunes, worked it's way into the Great American Songbook.

After the success of West Side Story, Sondheim worked as the lyricist (somewhat reluctantly) on one more show, before finally working on his own show in 1962, A Funny Thing Happened On The Way to the Forum. That other show was Gypsy, based on burlesque dancer Gypsy Rose Lee's memoirs. At the insistence of star Ethel Merman, veteran composer Jule Styne wrote the music - Merman was afraid of letting a rookie like Sondheim handle both. Gypsy turned out to be another hit for Sondheim, and songs from the show like "Small World" were quickly grabbed by pop and jazz performers.

Jazz interpretations of Sondheim's own music are far fewer than Bernstein's, perhaps because his music is less translatable into the jazz idiom. It could also be because he wrote so squarely for the sake of his text, or the fact that he experimented with different styles and rhythms. Or perhaps many jazz singers have been afraid to tackle the complexity of his music. A few have, including singer Nancy Wilson, and the duo Jackie and Roy, who recorded an entire album of Sondheim songs live in 1982.

More recently, a few jazz singers like Lea DeLaria and Kurt Elling have done marvelous interpretations of "The Ballad of Sweeney Todd" and "Not While I'm Around," songs from Sondheim's 1979 musical Sweeney Todd.

There is one song by Sondheim that has no doubt become a jazz standard. "Send In The Clowns" comes from his 1973 musical A Little Night Music and has been performed by performers like Frank Sinatra, Stan Kenton, Bing Crosby, Cleo Laine, and most notably, Sarah Vaughan late in her career. It's one of his more dramatic ballads, and Sondheim even credited his use of irregular meter in the song to the influence of Leonard Bernstein.