The Songs That Won The War 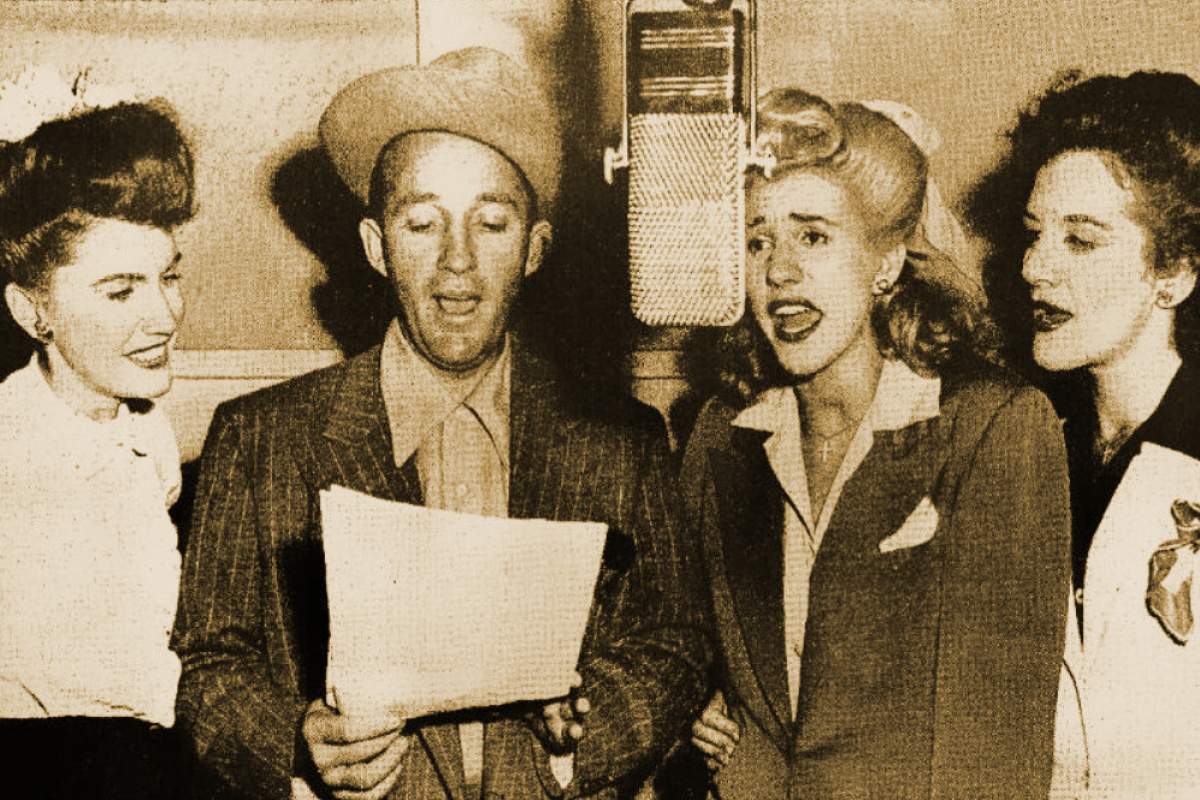 This week on this show, a Memorial Day special. I'll be exploring the music of an important historical event: World War II. Throughout the early 1940s, music played a key role in the war effort for America, serving as a way to boost morale, channel anger towards the Axis powers, or grapple with those complex and extraordinary feelings of loss. On this episode, we'll hear World War II songs performed by Frank Sinatra, Bing Crosby, Kate Smith, and more.

The Draft and Military Life

The American forces didn't enter the war until December 1941, after the attack on Pearl Harbor. But war was certainly on people's minds in 1939 and 1940.

Europe was embroiled in conflict, and the United States government was preparing for a possible war. Funding for the military increased significantly, but more important for the citizens at home, the selective service draft went into effect on September 16, 1940. As men were called up into service, musicians began to write songs of the draft and military life. Many of these songs were upbeat and humorous, not patriotic and militaristic, as if people were trying to make light of what they saw as a bad situation.

In December 1940, Nat King Cole and his trio recorded a novelty record called "Gone With The Draft" about the perks of not being drafted. In 1941, the Andrews Sisters had a hit with "Boogie Woogie Bugle Boy," a song about a musician adapting to military life. Johnny Mercer had a hit with the novelty record he co-wrote called "G.I. Jive" in 1943, which later became a hit for Louis Jordan in 1944. And in 1944, as the war was in full swing for the Americans, Frank Loesser's song "What Do You Do In The Infantry?" became a minor hit for Bing Crosby.

December 7, 1941—a that will live in infamy. The Attack on Pearl Harbor would officially bring America into the conflict. Patriotism was at an all-time high, and a string of "war songs" began to be recorded.

One of the first war songs that emerged also came again from Frank Loesser, relaying a heroic (and likely apocryphal) tale about a navy chaplain who put down his bible and took over a gun turret to fire at the enemy planes at Pearl Harbor, shouting the now famous phrase "Praise the Lord, and Pass the Ammunition."

More realistic songs include "(There'll Be a) Hot Time in the Town of Berlin (When the Yanks Go Marching In)," a preemptive victory song by Joe Bushkin and John DeVries, which Bing Crosby and the Andrews Sisters made into a hit in 1944 as the war effort in Europe was winding down.

During the war, many Tin Pan Alley composers tried to create that definitive patriotic war song, something that would define the war effort the way George M. Cohan's song "Over There" defined World War I. Certainly, the U.S. government hoped for this too as a way to raise morale. But by 1941, America had changed. Rousing songs didn't seem to inspire the way they did in 1917. Popular World War II songs instead tended to focus less on America's might, and more on our enemies weakness.

There are a series of rather racist songs against the Japanese that emerged, but I'll ignore those, because they are far less interesting that songs that poked fun at Adolf Hitler. These songs existed in all different genres, including the hillbilly folk music of singer Carson J. Robison, who wrote songs like "Mussolini's Letter To Hilter," as well as Hitler's reply.

But the most famous Hitler-bashing song of the war came from one of the looniest people in music: Spike Jones and his City Slickers. They wrote the song "Der Fuehrer's Face," a song that poked fun at Hitler in 1942. This novelty group was usually relegated to creating wacky, sound-effects laden versions of popular songs—that's true here too—but here they mix high-brow political satire with low-brow noises to create a song that completely undercuts the belief system of the Third Reich.

The war had dominated so much of American life that its presence in music was inescapable. Glenn Miller, who became an integral part of the war effort as the leader of the Army Air Force band, entertained the troops, and sent important messages to civilians at home. You can hear it in his song called "Shh, It's A Military Secret," where vocalists Tex Beneke, Marion Hutton, and the Modernaires, give an important lesson in espionage, and try to disguise it as a love song.

But if there was one dominant thread throughout most of the songs of World War II, that would be "sentimental." As men traveled overseas, separating families, with thousands losing their lives, songs of separation, loss, and nostalgia were some of the most popular songs of the era. You can hear this nostalgia in the biggest hit from this era, and really the biggest song of all time, Irving Berlin's "White Christmas" sung by Bing Crosby.

Other sentimental songs from the era include Jerome Kern and Oscar Hammerstein's "The Last Time I Saw Paris," a song that became big in 1940 after the Battle of France. This song won the Academy Award for Best Song in 1941. Jerome Kern also wrote another one of the biggest wartime sentimental ballads "Long Ago (And Far Away)" with lyricist Ira Gershwin. This was a hit for singers Dick Haymes and Helen Forrest. Dinah Shore had many sentimental hits during this era too, including the 1944 Jule Styne and Sammy Cahn song "I'll Walk Alone," a song about couples separated by war.

Sentimental songs that were even written before the war became bigger hits during the war. This was the case for "I'll Be Seeing You" (written in 1938) and "As Time Goes By" (written in 1931).

By 1945, victory was in sight. By May, the Allied Forces had secured victory on the European continent, with victory secured in the Pacific theater by August. By the end of the war, over 400,000 U.S. citizens had been killed in battle. That was relatively little compared to the loss of lives in France, Germany, Japan, and the especially the Soviet Union.

Certainly, the end of the war was cause for celebration for many in America. Celebratory songs were recorded. The band the Four Clefs, for instance, wrote a jump blues number called the "V-Day Stomp"

But the biggest feeling was that of relief. Relief that there would be no more killing, that men and women would be returning from overseas, and families could be reunited. The song "It's Been A Long, Long Time" by the Harry James Orchestra with singer Kitty Kallen reflected these feelings, and became one of the biggest hits from immediately after the war in 1945 and 1946.