The Songs And Sounds Of Matt Dennis 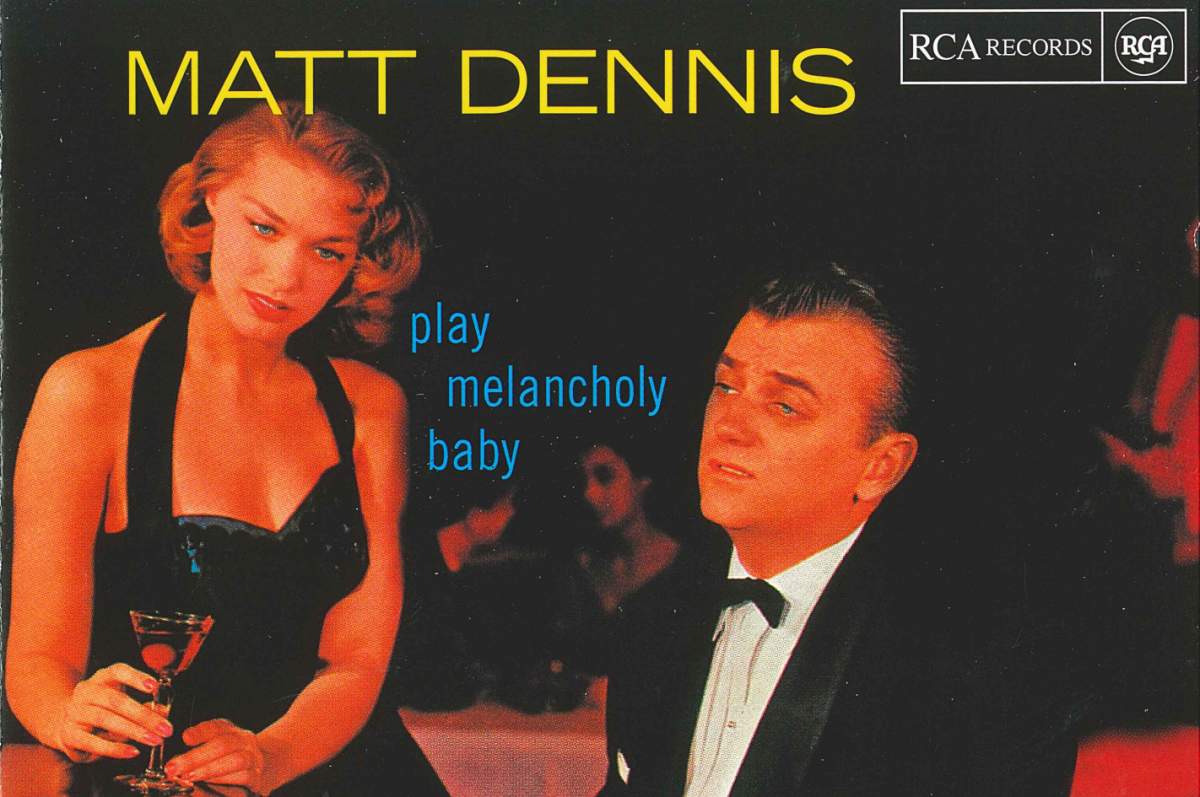 Songwriter and singer Matt Dennis neither recorded nor composed a great deal, but so much of his small output was of such high quality that he's impossible to ignore. His penned such memorable tune as "Angel Eyes," "Violets For Your Furs," "and "Everything Happens To Me," plus recorded a handful of his own highly acclaimed albums as a singer both in an intimate trio setting and with a larger orchestra. We're featuring his music and recordings on this week's show, sung by Frank Sinatra, Ella Fitzgerald, June Christy, Beverly Kenney, and the songwriter himself.

Matt Dennis was born in Seattle, Washington in 1914 to a showbiz family, so he got started as a performer at a young age before settling down in Los Angeles. His first big break came in the early 1940s, when he and lyricist Tom Adair were hired as a songwriting team for Tommy Dorsey's Orchestra. Together, they wrote hits for Dorsey's singers Frank Sinatra, Jo Stafford, and the Pied Pipers, hits like "Everything Happens To Me," "Violets For Your Furs," "Let's Get Away From It All," and "The Night We Called It A Day."

Just on the merit of these few Dorsey songs alone, Dennis had already secured his place into the upper echelon of great American songwriters. However, his best song was still ahead. Dennis's song "Angel Eyes" is perhaps one of the finest torch song of the 20th century, a smoky saloon song that's haunting and tragic. Ella Fitzgerald called it her favorite song of all time, and it was performed perhaps most memorably on Sinatra's album of saloon songs from 1958 Sinatra Sings For Only The Lonely.

Matt Dennis was a capable performer as well, possessing a light and agile voice not unlike Mel Tormé's, not to mention some fine chops at the piano. He recorded only a few times in the 1940s, but really hit his stride with five albums in the mid-to-late 1950s, ranging from intimate live sessions to sessions with a full jazz orchestra. His first album Matt Dennis Plays And Sings Matt Dennis was a live session featuring a trio with Dennis himself at the piano. Considered his best by writer and jazz critic Will Friedwald, the album features the singer performing his most well-known songs from the Dorsey years at a club in Hollywood, making the difficulty of his melodies seem effortless.

Dennis's career as a performer began to flourish after he served in World War II. Like Mel Tormé, his closest vocal analogue, he had an easy swing, great control of pitch, and his tone was warm and inviting. His 1956 RCA album She Dances Overhead features Dennis with a full orchestra performing the tunes of Richard Rodgers and Lorenz Hart. Play Melancholy Baby from 1958 is a more laid back affair, featuring a smaller ensemble performing mostly standards. The album's title comes from Dennis's treatment of the pre-World War I standard "My Melancholy Baby." Dennis sets it up with a verse that he himself wrote from the perspective of barroom pianist taking requests. He transforms the old standard into something akin to Billy Joel's "Piano Man," before Billy Joel's "Piano Man" was ever a thing.

Album title puns were fairly common in the jazz era: there's Miles Davis with "Miles Ahead" and "Milestones," John Coltrane with "Soultrane," Freddie Hubbard with "Ready For Freddie" and "Hub Caps," Red Garland's "A Garland of Red." Matt Dennis's albums Welcome Matt and Dennis, Anyone? certainly must rank among the groan-worthiest of this list. Nevertheless, these two albums are fine examples of Dennis's ability as a singer.

Welcome Matt consists of songs entirely about home life, featuring mostly standards and a few originals, including Dennis's own song "Welcome Mat" (with one T). The album is brassy and in your-face, arranged and conducted by Sy Oliver. Oliver and Dennis had a long history. Oliver arranged Dennis's first hit "Let's Get Away From It All" for Tommy Dorsey's Orchestra in 1940, and Ella Fitzgerald's original version of Matt Dennis's "Angel Eyes" in 1952. Dennis, Anyone? from 1955. The album features a small quartet live, with Dennis on piano. The songs are all Dennis originals, but precious few of them earned the rank of jazz standard.