A Soldier And A Song: Johnny Desmond In The 1940s 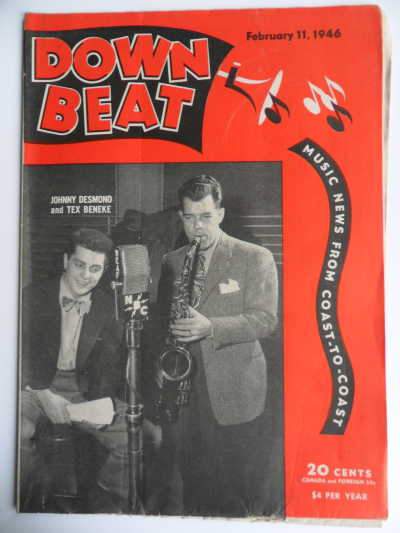 They called him "the GI Sinatra," and singer Johnny Desmond earned that nickname, along with his sergeant stripes, as a member of Glenn Miller's World War II Army Air Forces orchestra, where the baritone crooner caused such a swoon with his sound that he also became known as "the Creamer."

Desmond was born in Detroit in 1920, and as a boy used to sing in his father's grocery store, attracting the attention of a radio producer. As a teenager Desmond put together a vocal group that ended up being hired by the popular bandleader Bob Crosby, and from there he made the jump to a high-profile vocalist spot with drummer Gene Krupa's orchestra. Fellow band singer Anita O'Day later wrote of Desmond,

Johnny was a good looking, personable kid, but not exactly the typical Krupa cat. He vocalized before he sang, did things properly and took good care of himself. How he came to join Krupa, I could never figure out, because most of us were hard-drinking, high-living cats. Johnny didn't smoke, drink, or do dope, and as far as I know, he was true to the pretty wife he had at home. He was a straight cat in every way. It paid off.

After enlisting in the army in Desmond wrote to Glenn Miller, who was putting together a military orchestra, and asked to for the chance to work with the popular bandleader. Miller arranged for the singer's transfer, and for the rest of the war Desmond appeared on numerous recordings and broadcasts, building a reputation that seemed to ensure success as a solo act once global hostilities had ceased. In this edition of Afterglow we hear some of those recordings and broadcasts, as well as some early sides that Desmond made with Gene Krupa.

Listen to a 1973 interview with Johnny Desmond: