Singin' and Swingin' With Annie Ross 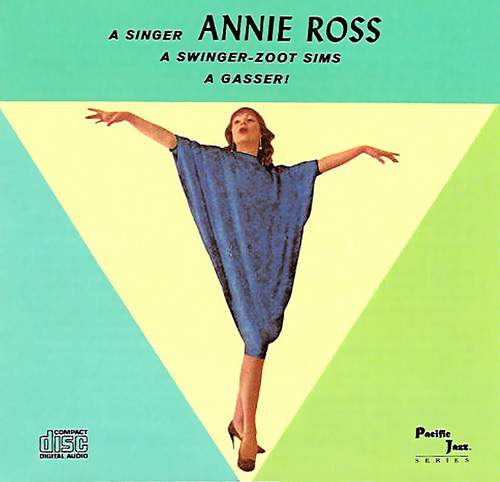 This week on Afterglow we pay tribute to singer Annie Ross. Ross was born July 25, 1930 in England, and moved to Hollywood as a child, living with the performer and future Finian's Rainbow star Ella Logan-who was, by conflicting accounts, either her mother or her aunt. After landing roles as a child actress in an Our Gang short and a film with Judy Garland, Ross dropped out of high school and moved to Europe, where she pursued a career as a vocal performer. She also became involved and had a child with bebop drummer Kenny Clarke, whose family raised the boy after Ross moved back to New York City.

A Twist of Fame

In 1952 Ross broke through as a singer with a record she made for Prestige-"Twisted," based on a recording by tenor saxophonist Wardell Gray, with lyrics Ross wrote poking fun at the psychoanalytical scene and sung in the style that came to be known as "vocalese"--singing lyrics in an instrumental-like manner and fitting them to already-existing jazz melodies. "Twisted" stamped an identity with jazz fans and hipsters for Ross and her "octave-leaping, sweet-and-sour voice," as writer James Gavin once described it, and she won Down Beat Magazine's New Star Award for 1952.

In the late 1950s Ross teamed up with fellow vocalists Dave Lambert and Jon Hendricks to form a trio that would take vocalese to new heights of accomplishment, recording seven albums between 1957 and 1962 that won them critical and commercial success-powered by Lamberts' vocal arrangements, Hendricks'jazz-inspired lyrics, and, as writer Will Friedwald put it, "Annie Ross' vocal muscle." Ross joined Lambert and Hendricks in 1957, when the two were trying to record a Count Basie tribute record with a chorus of studio singers. "They couldn't swing if you hung â€˜em," Hendricks said dismissively of the chorus, but Annie Ross solved his and Lambert's problem, especially after they decided to dub their vocals multiple times to replicate the music of the Basie orchestra. Ross was perfect for such a project-as Hendricks noted later, "Annie Ross has that feeling you can't learn in any school, that feeling that the men in the old Basie band had from birth."

Annie Ross moved back to England in the 1960s. Lambert Hendricks and Ross continued with a replacement singer for a couple of years, but it just wasn't the same without Ross, and the group disbanded not long before Dave Lambert was killed in a car crash in 1965. Ross opened her own nightclub, recorded several more albums as a leader during her stay in England, and had a very up-and-down professional life for many years, finding work as a club singer and in Hollywood films such as Superman III and Robert Altman's Short Cuts, where she played a past-haunted, world-weary jazz singer. "By rights I should be dead," she told James Gavin in 1993 when Short Cuts came out. "But I'm just happy I survived."