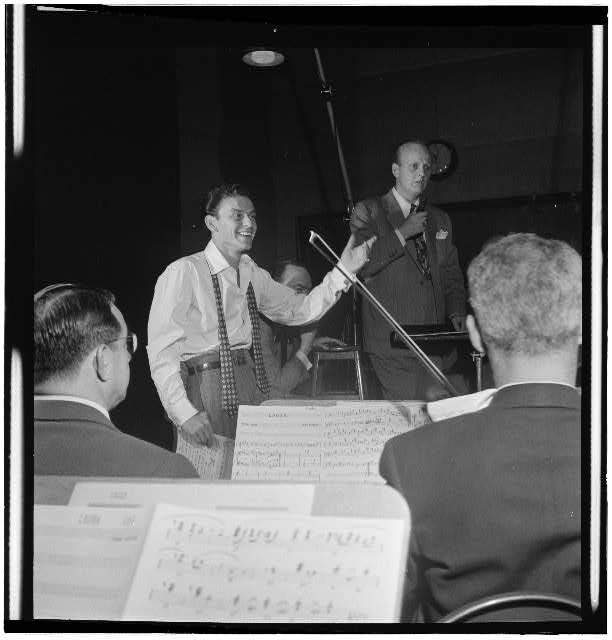 This week on Afterglow we're paying a centenary tribute to arranger Axel Stordahl, who was born on August 8, 1913 in Staten Island, New York, the son of immigrants from Norway. He got into the jazz trade playing trumpet with bands in Staten Island and the Catskills and eventually joined Tommy Dorsey's orchestra in 1935, where he honed his growing skills as an arranger. His contemporary Sid Cooper said that

Axel was a revolutionary. He taught a lot of people that strings and harp, and so forth, could be used very nicely in a dance band.

The man who would benefit from Stordahl's emerging talent even more than Tommy Dorsey was singer Frank Sinatra, who joined Dorsey's orchestra in January of 1940 and who went on to become one of the first superstar vocalists of the swing era. In January of 1942 Sinatra made his first move towards becoming a solo act, recording four sides with an orchestra conducted by Stordahl, featuring Stordahl arrangements.

Although Sinatra recorded a number of Stordahl's arrangements while with Dorsey, the bulk of his and Stordahl's recorded legacy was produced during Sinatra's time at Columbia Records, from the mid-1940s into the early 1950s. They made more than 300 recordings that created a template for the mid-20th century pop ballad, using strings and woodwinds to maximum advantage, and employing a harmonic sense heavily influenced by classical composers such as Rachmaninoff and Debussy and Delius.

As a personality, Stordahl was a mild-mannered counterpart to the notoriously mercurial Sinatra; arranger Billy May said of him,

Axel had a very low fuse, which is unheard of in the music business. People would explode, and Axel would just stand there, lighting and then smoking his pipe, generally upside down, in the best Norwegian sailor tradition. Then, after everybody got their egos out of the way, Axel would go ahead and do his job.

The two would continue collaborating through 1953, including the singer's first recordings that he made for the Capitol label after leaving Columbia, and then again for one last, poignant reunion a decade later for the 1962 album Point Of No Return. The album was indeed a final point of departure for both men, but in very different ways. Sinatra was making the record to fulfill his contractual obligation to his label Capitol Records, which he had just left to start up his own recording company, Reprise. Axel Stordahl, not yet 50, was ill with cancer. After the first song had been recorded, Stordahl's wife, singer June Hutton, went to Sinatra's guitarist Al Viola and said,

Al, you have no idea what this means to Axel. He so wanted to do this album with Frank, he wanted to have this last hurrah.