Whether you call him Pops or Satch, Louis Armstrong was likely the single most influential figure in jazz. And so sharing time in the spotlight with Satchmo was almost like a jazz benediction. Luckily, Armstrong was more than willing to share the stage. This week on the show, I’ll be looking at some favorite duet recordings Louis had with his many famous friends. Coming up, we’ll hear him with Bing Crosby, Ella Fitzgerald, Billie Holiday, and many more.

It’s Satchmo and Friends, coming up next on Afterglow

[MUSIC - ELLA FITZGERALD AND LOUIS ARMSTRONG, "THEY CAN'T TAKE THAT AWAY FROM ME"]

Louis Armstrong with Ella Fitzgerald with one of their more famous duets, the George and Ira Gershwin song “They Can’t Take That Away From Me.” That comes from the 1956 Verve LP Ella and Louis, featuring the Oscar Peterson Quartet, and of course, Louis Armstrong on trumpet.

Mark Chilla here on Afterglow. On this show, we’re exploring the times that Pops, a.k.a. Louis Armstrong, shared the spotlight with other singers. Despite already being a legend by the 1930s, Armstrong was more than gracious to share the stage with others. A quick glance through his complete discography compiled by Jos Willems revealed that Louis sang with over 30 singers in his career, many of them in live concerts. I’ll be featuring mostly studio recordings this hour.

Before I get to some famous names like Bing Crosby and Billie Holiday, I want to turn my attention to a less famous singer who possibly shared the spotlight with Louis more than anyone else, and that’s Velma Middleton. Middleton had the personality of a vaudeville star and the chops of a blues diva. From 1942 through her death in 1961, she was the primary vocalist first in Louis Armstrong’s Orchestra in the early 1940s and then with his All-Stars starting around 1947.

Middleton had the personality, wit, and skill to match Armstrong’s antics, and despite being 16 years younger than Louis, she often served as the more mature person on stage.

Here’s Louis Armstrong and Velma Middleton in 1951 with the Irving Berlin song “You’re Just In Love,” on Afterglow.

[MUSIC - LOUIS ARMSTRONG AND VELMA MIDDLETON, “YOU’RE THE APPLE OF MY EYE”]

Louis Armstrong in 1951 with the primary vocalist in his groups The All-Stars, Velma Middleton. Just now, we heard them with “You’re The Apple of My Eye” and before that “You’re Just In Love.”

Louis Armstrong’s first vocal records came in 1926 with his Hot Five and Hot Seven groups, and it wasn’t too long after that he started singing duets. His first duets were mostly with his wife at the time Lil Armstrong…

[MUSIC CLIP – LOUIS AND LIL ARMSTRONG, “THAT’S WHEN I’LL COME BACK TO YOU”]

...but not long after, he was performing with some bigger stars. Here’s a recording of Louis Armstrong and his Orchestra in 1929 with singer and songwriter Hoagy Carmichael. This is the two of them singing Carmichael’s original tune “Rockin’ Chair,” on Afterglow.

Louis Armstrong and his Orchestra in 1929 featuring singer and songwriter Hoagy Carmichael with “Rockin’ Chair.” Hoagy played the father character in that song, while Louis played the son. Armstrong would go on to perform that song many more times in his career as a duet with singer and trombonist Jack Teagarden.

It wasn’t only solo vocalists that Louis Armstrong sang with. On occasion, he would sing with entire vocal groups, including The Golden Gate Quartet, the Jud Conlon Rhythmaires, the Hi-Lo’s, and the Mills Brothers.

This is Louis Armstrong and the Mills Brothers with the old 1905 song “In The Shade of the Old Apple Tree,” on Afterglow

[MUSIC - LOUIS ARMSTRONG AND THE MILLS BROTHERS, “IN THE SHADE OF THE OLD APPLE TREE”]

Louis Armstrong and the Mills Brothers in 1937 with “In The Shade of the Old Apple Tree.”

In 1950, Louis Armstrong teamed up with another Louis, Louis Jordan, that is. The two both had a good sense of humor, an excellent sense of rhythm, plus they recorded for the same label, which made the partnership easy. Naturally, when they recorded together, their songs leaned closer to novelty records. In fact, this next tune was something that had been in Armstrong’s repertoire since 1931.

This is Louis Armstrong and Louis Jordan in 1950 with “I’ll be Glad When You’re Dead You Rascal You,” on Afterglow.

[MUSIC - LOUIS ARMSTRONG AND THE LOUIS JORDAN, "I'LL BE GLAD WHEN YOU'RE DEAD YOU RASCAL YOU"]

Louis Armstrong and Louis Jordan in 1950 with a standard from Armstrong’s repertoire, “I’ll Be Glad When You’re Dead You Rascal You”

That recording was for Decca Records.

Decca likely set up many of Armstrong’s duets throughout the years. It’s customary for a record label to pair up two of their big stars. That’s likely what happened in 1949 when Louis Armstrong teamed up with Decca’s more controversial star Billie Holiday, who had been in and out of jail on drug-related charges. The two recorded a pair of songs, “You Can’t Lose a Broken Heart” and “My Sweet Hunk O’ Trash,” only this time, it was Armstrong who was providing the controversy.

On the recording of “My Sweet Hunk O’ Trash,” the two singers were having fun with some ad lib banter between the lines. After Holiday’s line “Now when you stay out very late, it sure makes me wait,” Armstrong replies with “how come, baby?” Only in Armstrong’s gravely voice, “how come” sounds like something much more obscene. Decca even pulled the record and tried to redub the line with someone else’s voice! It was a big controversy in 1949.

Here is the original, un-dubbed version of that song now. The line in question comes about 3 minutes in, see if you can hear it.

This is Louis Armstrong and Billie Holiday with “My Sweet Hunk O’ Trash,” on Afterglow.

Louis Armstrong and Billie Holiday with two Decca recordings from 1949. Just now, we heard “You Can’t Lose a Broken Heart” and before that “My Sweet Hunk O’ Trash.”

Coming up after a short break, we’ll hear more duets with Louis Armstrong, including his work with Ella Fitzgerald and Bing Crosby. Stay with us.

Welcome back to Afterglow, I’m Mark Chilla. We’ve been exploring Louis “Pops” Armstrong this hour, looking at his work with some singing friends.

One of Armstrong’s most frequent duet partners, and certainly one of his most famous, was the great Ella Fitzgerald. In terms of vocal tone, the two couldn’t have been more different. But in terms of status, there were hardly two people more evenly matched than Ella and Louis.

Before their set of famous albums together for Verve Records in the late 1950s, Ella and Louis first teamed up in the late 1940s and early 1950s for Decca Records, where they were both signed.

I’ll start with a recording they made in August of 1950. This is Louis Armstrong and Ella Fitzgerald with the Gus Kahn tune “Dream A Little Dream of Me,” on Afterglow.

[MUSIC - LOUIS ARMSTRONG AND ELLA FITZGERALD, “DREAM A LITTLE DREAM OF ME”]

[MUSIC - LOUIS ARMSTRONG AND ELLA FITZGERALD, “WHO WALKS IN WHEN I WALK OUT”]

Two Decca recordings from 1951 with Louis Armstrong and Ella Fitzgerald. Just now, the song “Who Walks In When I Walk Out,” and before that “Dream A Little Dream Of Me.”

In 1956, Norman Granz’s new Verve Record label had poached Ella Fitzgerald from Decca. That same year, Granz had also produced a concert at the Hollywood Bowl starring Louis Armstrong and his All-Stars. So Granz managed to arrange a one-day recording session the day after that Hollywood Bowl concert to feature both Ella and Louis recapturing their magic together from the early 1950s. And what a magical day it was. The Oscar Peterson trio served as the accompaniment, along with drummer Buddy Rich. Armstrong’s trumpet playing wasn’t as strong as it used to be, so he relied mostly on his singing. But Armstrong was still in charge, choosing keys and tempos, and making some bold musical choices.

Here are Ella and Louis from their 1956 Verve LP Ella & Louis with the Paul James and Kay Swift song “Can’t We Be Friends,” on Afterglow

[MUSIC - LOUIS ARMSTRONG AND ELLA FITZGERALD, “CAN’T WE BE FRIENDS”]

[MUSIC - LOUIS ARMSTRONG AND ELLA FITZGERALD, “THEY ALL LAUGHED”]

Ella Fitzgerald and Louis Armstrong in 1957 from their album Ella & Louis Again performing the George and Ira Gershwin song “They All Laughed.” Before that, we heard the two of them in 1956 with “Can’t We Be Friends.” Ella and Louis would team up again later in 1957 for an album of songs from the Gershwin opera Porgy and Bess.

I have one more Louis Armstrong duet partner that I want to feature this hour, and that is Mr. Bing Crosby. Crosby’s legacy in the music biz is nearly as important as Satchmo’s, and two had quite a history. They first recorded together way back in 1936 when they teamed up on the song “Pennies From Heaven”...

...This was a big moment in Bing’s career, as he had learned much of his jazz style by listening to Armstrong’s recordings. And they teamed up many more times over the years, often on Crosby’s radio program, where they made memorable duets, like the song “Gone Fishin’”...

Here are Bing and Satchmo from the 1960 album called Bing & Satchmo, performing the Alan Bergman original “Let’s Sing Like A Dixieland Band,” on Afterglow.

[MUSIC - LOUIS ARMSTRONG AND BING CROSBY, “NOW YOU HAS JAZZ”]

Louis Armstrong and Bing Crosby from the 1956 Cole Porter film musical High Society (a film they were both featured in). That was the Porter song “Now You Has Jazz.” Before that, we heard Bing and Satchmo from their 1960 album together performing “Let’s Sing Like A Dixieland Band.”

And thanks for tuning in to this look at Louis Armstrong and Friends, on Afterglow. 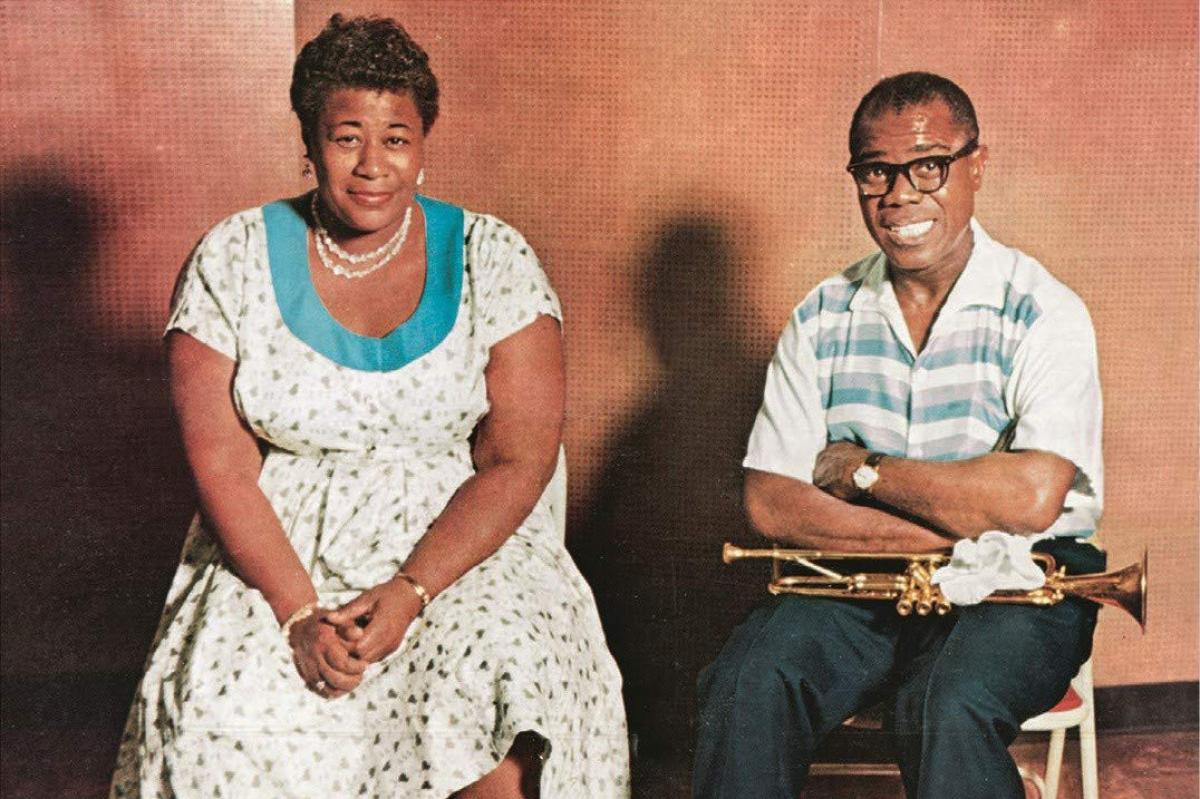 Ella Fitzgerald and Louis Armstrong from the cover of their 1956 Verve LP "Ella and Louis." They recorded three Verve albums together and several earlier singles for Decca. (Album Cover)

Whether you call him "Pops" or "Satch," Louis Armstrong was likely the single most influential figure in jazz. And so sharing time in the spotlight with "Satchmo "was almost like a jazz benediction. Luckily, Armstrong was more than willing to share the stage. This week on the show, I’ll be looking at some favorite duet recordings Louis had with his many famous friends. We’ll hear Armstrong duets with Bing Crosby, Ella Fitzgerald, Billie Holiday, Louis Jordan, The Mills Brothers, Hoagy Carmichael, and longtime All-Stars vocalist Velma Middleton.