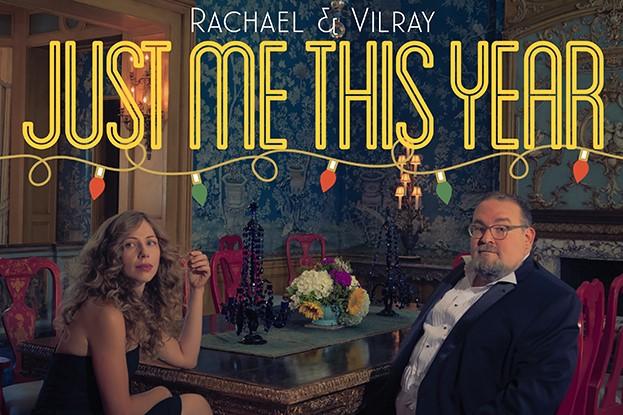 The jazz duo Rachael and Vilray have released a new, original Christmas tune "Just Me This Year" (Nonesuch Records)

Well, 2022 is almost at a close… Do you believe it? So it’s time this week to catch up on what’s new in the world of vocal jazz and traditional pop for the second half of the year. After a strange lull during the height of the Covid pandemic, things have more or less returned to normal in the recording industry. Coming up, we’ll hear a tribute to Judy Garland from Rufus Wainwright, sample from a Leonard Cohen tribute record, plus hear a new holiday original from the duo Rachael and Vilray. Plus, we’ll hear new records from a promising class of younger singers, including Samara Joy and Caity Gyorgy.

Artists featured on this episode...

Samara Joy - I featured music from her debut album in my recent releases show last year. If you recall, she won the 2019 Sarah Vaughan International Jazz Vocal Competition, which immediately catapulted her into the category of “rising jazz star to watch.” Her latest record called Linger Awile is her debut for the much venerated jazz label Verve, and features the 22-year-old sounding even more polished and mature than before. The comparisons to Ella Fitzgerald, Sarah Vaughan, and Billie Holiday are frequent in the jazz press, and they are not unfounded. Joy has that classic, almost timeless quality to her voice, and this is a strong major label debut.

Caity Gyorgy -  I’ve featured the music of the 24-year-old Canadian jazz singer Caity Gyorgy on the show before as well. She’s become one of the big jazz artists to watch up in Canada, winning a Juno Award (a.k.a., the “Canadian Grammys”). And she’s developed a sizable social media following, showing off her scat singing and bebop chops. Her new album, titled Featuring, shows off her songwriting ability as well. She writes light and fresh jazz songs in a songwriting style that’s reminiscent of the hip songwriting of Bob Dorough.

Rufus Wainwright - Wainwright has also performed music that leans more towards traditional pop, and his latest record is a musical homage to a venerated traditional pop icon, Judy Garland. Garland’s centennial was this year—you may remember one of the three shows I did about her for her centennial—and Wainwright’s latest record is in fact his second tribute album to Judy. Back in 2007, he recorded a live album Rufus Does Judy at Carnegie Hall that paid tribute to Garland’s world-famous, groundbreaking album recorded at Carnegie Hall (which won Judy a Grammy, and earned Wainwright his first Grammy nod). And this new album, called Rufus Does Judy at Capitol Studios, pays tribute to the singer’s seven-year run for Capitol Records between 1955 and 1962, recording many memorable songs and working with some of the top arrangers. Wainwright reimagines some of these Garland classics into his own inimitable style.

Lauren Henderson - Although born in Massachusetts, the Afro-Latinx jazz singer Henderson was recently praised by the Recording Academy for being one of the 10 Jazz Artists Blending And Expanding The Sounds Of Latin America. I’ve featured her on the show before, and she takes her distinctively tight vibrato, and blends it uniquely with the sounds of jazz, R&B, soul, and flamenco to create a style all her own. Her latest album La Bruja (“The Witch”) features classic Latin jazz tunes and originals.

Somi - I featured her once on the program before, when she was nominated for a Grammy in 2021. Somi’s style blends jazz with the sounds of her African roots, and as I mentioned last time, her parents were immigrants from East Africa and she was mentored by the legendary South African trumpeter Hugh Masekela. Her latest album called Zenzile: The Reimagination of Miriam Makeba is a tribute the South African singer and activist nicknamed “Mama Africa” who famously fought against apartheid in the 1980s.

Sara Gazarek - Another singer wwho I’ve featured on the show before. Gazarek earned a Grammy nod for best jazz vocal record in 2020, as well as a best arranging nomination in 2021 for her work with her jazz vocal group Saje. Her latest EP, a four-song set titled Vanity, features jazz versions of songs by Fiona Apple, Rodgers and Hammerstein, and more. On the program, I feature the Rodgers and Hammerstein song "Something Good," originally from The Sound Of Music, which she recorded as a tribute to her mother.

The Baylor Project - The second half of this year also saw a new live album from the four-time Grammy nominated jazz duo known as the Baylor Project, aka vocalist Jean Baylor and her husband drummer Marcus Baylor. The album, called The Evening, recorded live at the New York City design studio APPARATUS, features the duo engaging and connecting with their audience with style and soul.

Gregory Porter - While Gregory Porter did not have a new album in the second half of this year, he was a featured singer on the new compilation album Here It Is: A Tribute To Leonard Cohen. The album from the Blue Note label features the songs of the great songwriter Leonard Cohen, performed in various styles by singers like Norah Jones, James Taylor, Sarah McLachlan, Peter Gabriel, Mavis Staples, and even Iggy Pop. Guitarist Bill Frissel, saxophonist Immanuel Wilkins, organist Larry Golding, and drummer Nate Smith are also featured on many of the tracks as the accompanists.

Rachael and Vilray - Yet another group I've featured on the program before. In fact, I featured an hour-long interview with Vilray here on the program back in 2020. He’s a wonderful songwriter who writes clever jazzy pop with a 1930s flair. And of course, Rachael Price of the band Lake Street Dive has one of the most magnificent, soulful voices in pop music today. With the holidays nearly upon us, the two have released a new Christmas song. Although, it’s unlike most Christmas songs… it’s a celebration of being recently single for the holidays.