Once again, we’ll be exploring what’s new in the world of vocal jazz and traditional pop on this week’s program, taking a look at some singers working today to keep this kind of music alive and push it in new and interesting directions. Ahead, we’ll hear jazz veteran Kurt Elling dabble in the music of R&B and funk. We’ll also hear some takes on the music of Nina Simone by singers like Ledisi and Lady Blackbird. And we’ll hear what will very likely be the swan song of the legendary Tony Bennett.

It’s a roundup of Recent Releases for the second half of 2021, coming up next on Afterglow

MUSIC - STACEY KENT AND ART HIRAHARA, "I WISH I COULD GO TRAVELLING AGAIN"

Singer Stacey Kent and pianist Art Hirahara with the song “I Wish I Could Go Travelling Again,” written by Kent’s husband and musical partner Jim Tomlinson, with lyrics by acclaimed author and Nobel Laureate Kazuo Ishiguro. That comes from her latest album called Songs From Other Places, a duet album between Kent and Hirahara. She first sang that song in 2007 on her album Breakfast on the Morning Tram, and revised it here in 2021 given its relevance in a world stuck in lockdown.

MUSIC CLIP - ART HIRAHARA, "I'M GETTING SENTIMENTAL OVER YOU"

Mark Chilla here on Afterglow. On this show, we’re exploring what’s new in the world of vocal jazz and traditional pop. Coming up, we’ll hear from singers I’ve featured before, like Kurt Elling, Jazzmeia Horn, and Cyrille Aimee, plus some newer singers like Lady Blackbird and Caity Gyorgy.

But first, let’s hear the latest from a very familiar voice: the legendary Tony Bennett. Bennett, who just turned 95 years old in August, revealed that he had been diagnosed with Alzheimer’s disease earlier this year, and then made the announcement recently that he was retiring from performing altogether. Which means that his latest album, Love For Sale, will sadly be his last. It caps off a remarkable 70-year career that spans over 70 albums, 20 Grammy awards, and countless other accolades.

Love For Sale is his second duet album with singer Lady Gaga, this time featuring the music of Cole Porter. They had recorded together first on his 2011 album Duets II, and then again on the 2014 best-selling album Cheek To Cheek, which earned Bennett a Guiness World Record for being the oldest person to reach Number 1 on the US Album Chart. With this latest album, Bennett earned yet another Guiness Record: at age 95, he is now the oldest person to release an album of new material.

Let’s hear a song from that album now. Here is Tony Bennett and Lady Gaga from their album Love For Sale with the Cole Porter song “I Get A Kick Out Of You,” on Afterglow.

MUSIC - TONY BENNETT AND LADY GAGA, “I GET A KICK OUT OF YOU”

Tony Bennett and Lady Gaga, on what will be at age 95 his final album. That was Cole Porter’s “I Get A Kick Out Of You,” from their duet album Love For Sale.

Let’s turn now to another singer I’ve featured before on this program, Jazzmeia Horn. I first featured her music in 2017 after she won the Thelonious Monk International Jazz Vocal Competition, and have featured her music several times since. Her latest record called Dear Love is not only a collection of love songs of all kinds both new and old, but also the singer’s first album with a big band, an ensemble she’s calling “Her Noble Force.” As with everything she’s done, the album brims with confidence and swing, blending traditional jazz with elements of gospel and R&B.

Here is Jazzmeia Horn and Her Noble Force with their version of the classic 1928 Sigmund Romberg and Oscar Hammerstein song “Lover Come Back To Me,” on Afterglow.

MUSIC - JAZZMEIA HORN AND HER NOBLE FORCE, “LOVER COME BACK TO ME”

Singer Jazzmeia Horn and Her Noble Force big band with a swingin’ version of the jazz standard “Lover Come Back To Me.” That comes from their latest album called Dear Love.

2021 saw several tributes to the “High Priestess of Soul” Nina Simone. One comes from the jazz and R&B singer Ledisi, whose album Ledisi Sings Nina features her performing seven of Simone’s most beloved songs with the acclaimed Metropole Orkest. Ledisi has performed Simone’s music before, notably at the BBC Proms in 2019.

The other tribute to Simone comes from a new singer on the scene, the Los Angeles-based singer Marley Munroe, who goes by the name Lady Blackbird. That pseudonym is taken from one of Simone’s most powerful civil rights anthems, 1963’s “Blackbird,” and Lady Blackbird released her own version of that tune two days before George Floyd was killed in 2020. It’s also the lead track on her 2021 album called Black Acid Soul, a stripped down album that combines elements of jazz, R&B, and soul all centered around the singer’s smoky and sorrowful voice.

American singer Ledisi with the Metropole Orkest performing Nina Simone’s “Feeling Good.” That comes from her latest album Ledisi Sings Nina released in July. Before that, another Nina Simone song, her 1963 song “Blackbird,” performed there by singer Lady Blackbird on her debut album Black Acid Soul, released in September.

Our next singer is a familiar one performing in a style that’s a little more unfamiliar. Kurt Elling is well-known around these parts as being the richly-voiced baritone known for silky jazz ballads and hard-driving vocalese bop. On his latest album called Superblue, the singer has teamed up with guitarist Charlie Hunter to make something that channels funk and R&B, and even elements of hip hop beats.

The songs vary from originals by Charlie Hunter, to jazz tunes by Wayne Shorter, to R&B grooves by Cody Chestnutt, many with original lyrics by Elling himself. And the grooves vary as well from straight up funk numbers to smooth neo-soul jams. Let’s hear one of those neo-soul inspired tunes now.

This is Kurt Elling, from his new album called SuperBlue, with the Carla Bley song “Endless Lawns,” on Afterglow

Kurt Elling and guitarist Charlie Hunter with the Carla Bley song “Endless Lawns.” The lyrics there were written by Elling himself, based on the poem “Sailing By Stars” by Judith Minty. That comes from Elling’s latest funk and R&B record titled SuperBlue.

We’ll have some more recent releases from 2021 in just a bit. Stay with us.

Welcome back to Afterglow, I’m Mark Chilla. We’ve been exploring what’s new this year in the world of vocal jazz and traditional pop so far this program, and I want to turn my attention to two young singers who are each putting their imprint on the vintage jazz sound: Caity Gyorgy and Laufey.

Caity Gyorgy is a Canadian-based jazz singer, whose style is rooted in old-school swing and bebop. She’s got great jazz chops, a really good sense of swing and style, and is also a songwriter to boot. Her original jazz tune “Secret Safe,” which we’ll hear in just a second, won the grand prize in the jazz category at the 2021 John Lennon Songwriting Contest.

We’ll follow this up with the Icelandic-Chinese singer Laufey (lay-vay), an up-and-coming singer-songwriter with a vintage jazz sound. In addition to writing her own 1940s-inspired songs, Laufey is also a multi-instrumentalist, playing piano and cello. We’ll hear her original song a little later.

First up, here is singer Caity Gyorgy with her original, award-winning song “Secret Safe,” on Afterglow.

Two young jazz singers, both with difficult to pronounce names. Just now, that was the Icelandic-Chinese singer Laufey (spelled L-A-U-F-E-Y), doing the French jazz song “I Wish You Love,” made famous by Keely Smith in 1957. That comes from Laufey’s latest album called Typical of Me. Before that, we heard Canadian singer Caity Gyorgy (her last name, “George” is spelled the Hungarian way, G-Y-O-R-G-Y), with her original song “Secret Safe.” That comes from her new album Now Pronouncing: Caity Gyorgy.

Let’s turn now to a more established jazz singer, and one who I’ve featured before, Kate McGarry. Her latest record called What To Wear In The Dark features mostly newer standards by folks like George Harrison, Joni Mitchell, and the Eagles, all on the theme of finding hope in dark times. McGarry’s arrangements are as creative as ever, and she’s featured alongside the Keith Ganz ensemble, along with other guest stars.

Here’s a song that features her with noted jazz singers Erin Bentlage, Becca Stevens, and Michelle Willis. This is Kate McGarry with the Cat Stevens song “On The Road To Find Out,” on Afterglow.

MUSIC - KATE MCGARRY, “ON THE ROAD TO FIND OUT”

Singer Kate McGarry and the Keith Ganz Ensemble, featuring vocal arrangements by Erin Bentlage. That was the Cat Stevens song “On The Road To Find Out,” from McGarry’s latest record What To Wear In The Dark.

The next singer I want to feature is another favorite of mine, Cyrille Aimee, who just released her second album this year called Petite Fleur. I featured her first album this year, a guitar and voice album called I’ll Be Seeing You on my last recent releases show. On this latest Petite Fleur, Aimee is celebrating her adopted hometown of New Orleans and its connection to her home country of France. The album features Aimee with drummer Adonis Rose and the New Orleans Jazz Orchestra performing songs that evoke the French roots of the Big Easy, and nowhere is that clearer than in the title song.

This is French jazz singer and New Orleans resident Cyrille Aimee, peforming a song written by jazz musician Sidney Bechet, who was born in New Orleans and lived much of his life in France. This is “Petite Fleur,” on Afterglow

Singer Cyrille Aimee with the Sideny Bechet song “Petite Fleur,” the title track off of her latest album, which celebrates the French roots of her adopted hometown of New Orleans.

To close off this hour of new releases, I’ll feature now a song by an up-and-coming artist, at least in the jazz world, singer Michael Stephenson. Stephenson, a songwriter and multi-instrumentalist has performed before under the pseudonym Sonny Step, but now on his debut vocal album, he’s using his real name to sing jazz and traditional pop standards with an exciting and vibrant tenor sound, alongside his old friend, bassist Alexander Claffy.

Here is Michael Stephenson with the jazz standard made famous by Nat King Cole, “Sweet Lorraine,” on Afterglow

Thanks for tuning in to this look at recent releases on Afterglow. 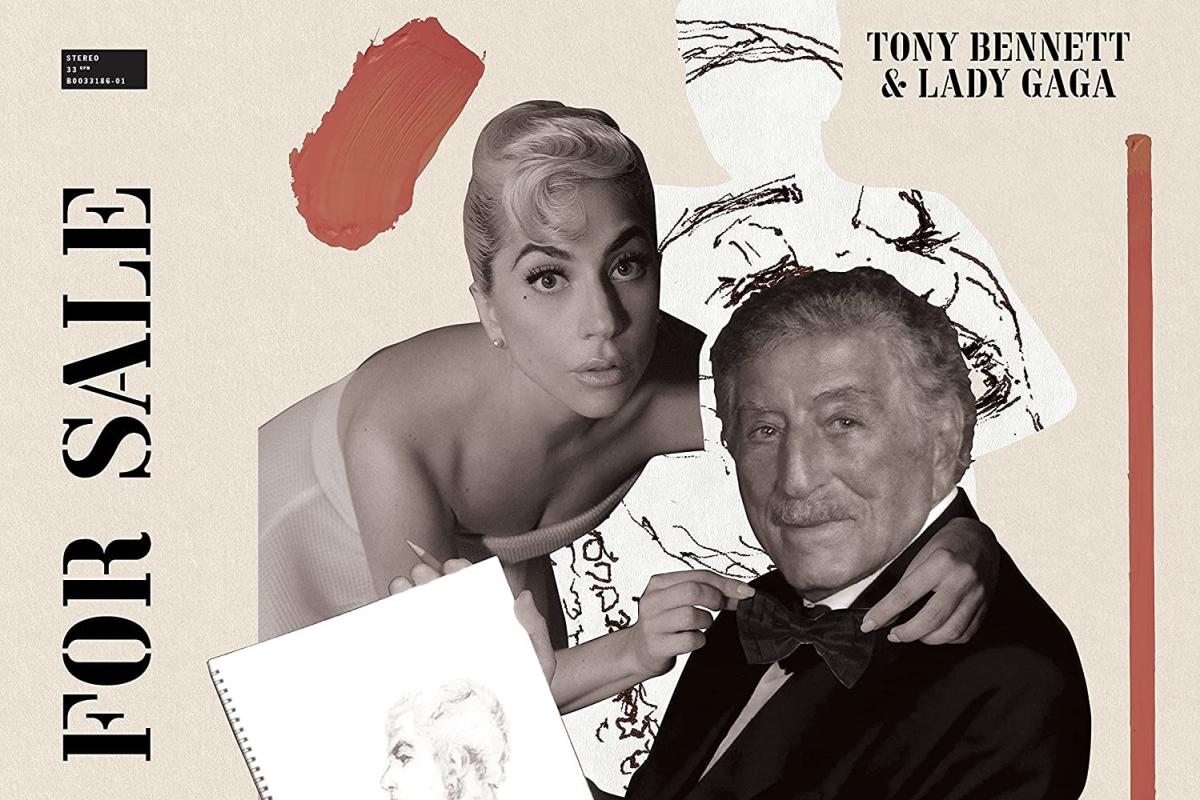 Once again, we’ll be exploring what’s new in the world of vocal jazz and traditional pop on this week’s program, taking a look at some singers working today to keep this kind of music alive and push it in new and interesting directions. On this program, we’ll hear jazz veteran Kurt Elling dabble in the music of R&B and funk. We’ll also hear some takes on the music of Nina Simone by singers like Ledisi and Lady Blackbird. And we’ll hear what will very likely be the swan song of the legendary Tony Bennett.