Q And The Queen: Dinah Washington With Quincy Jones 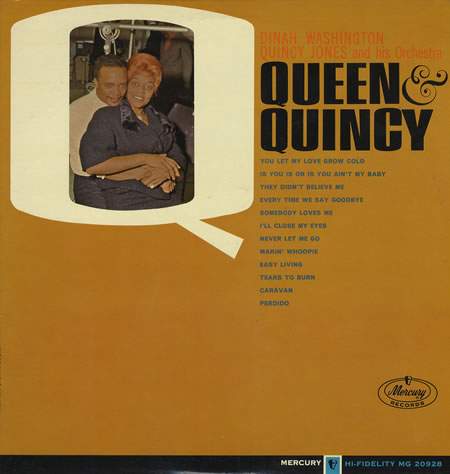 In 1955 singer Dinah Washington, the so-called "Queen of the Blues," was 30 years old, in the prime of her career and moving upward, having first found the spotlight in the 1940s as a singer with Lionel Hampton's orchestra and then as a solo act. She was recording for Mercury Records, and the label told her that they wanted her to work with a "name" arranger with commercial appeal. Washington replied with an expletive that she had a name for them, and his name was Quincy Jones.

In 1955 the name "Quincy Jones" didn't carry quite the weight that it does today. Jones was a young jazz trumpeter who, like Washington, was from Chicago and had spent some time with Lionel Hampton's orchestra. He had come to New York City from the Berklee School of Music and was looking for professional work, and he would always credit Dinah Washington for giving him his first break in the music business. The two had met at the Apollo Theater in Harlem, and Washington liked the arranging work she'd heard Jones do for other performers. She also liked Jones in other ways, initiating an affair that would help bring about the demise of the young arranger's marriage. In the studio, the two created a masterpiece, the 1955 LP For Those In Love, which featured Washington with top-rate jazz talent of the time, and which led to further Washington-Jones collaborations. While the musicians and Jones' arrangements helped elevate the album into the pantheon of late-night classics, it was Washington's vocals that carried it most of the way. In his autobiography Q Jones wrote

She had a voice that was like the pipes of life. She could take the melody in her hand, hold it like an egg, crack it open, fry it, let it sizzle, reconstruct it, put the egg back in the box and back in the refrigerator, and you would've still understood every single syllable of every single word she sang. Every single melody she sang she made hers. Once she put her soulful trademark on a song, she owned it and it was never the same.

This edition of Afterglow features selections from For Those In Love as well as further collaborations between Jones and Washington. We'll also hear music from singers Jose James, Cecile McLorin Salvant, and Mark Murphy, and Charlie Parker and Bill Evans as well.