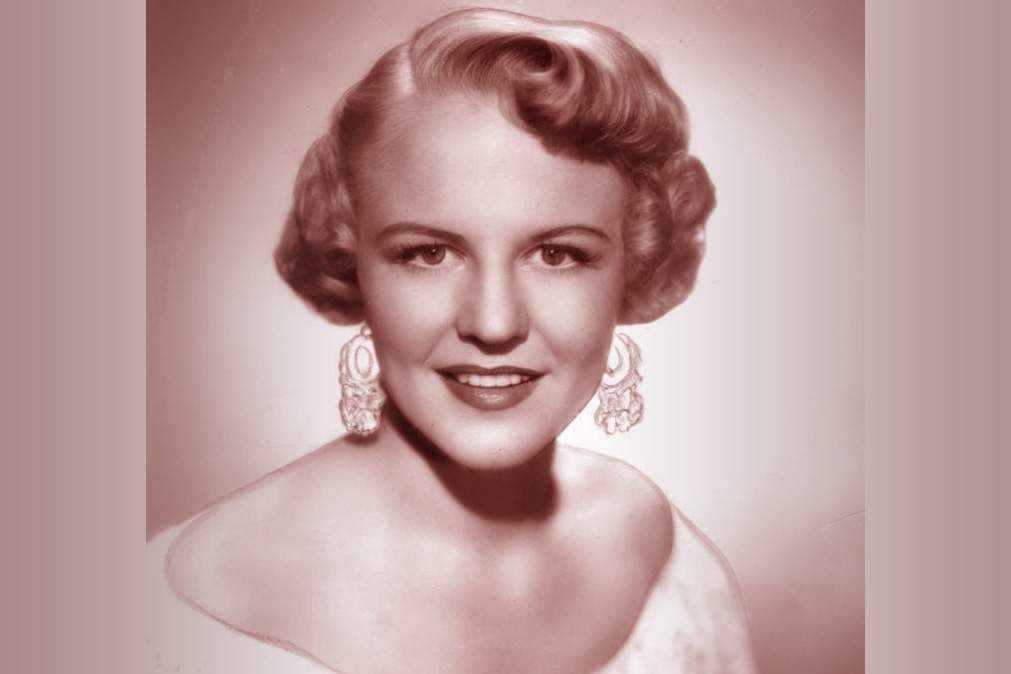 Peggy Lee wrote many of her famous tunes, including “It’s A Good Day,” “I Love Being Here With You,” and “Fever.”

This week, I'm going to explore one the most successful songwriters in jazz, who also happened to be one of the biggest pop stars of the 20th century: Miss Peggy Lee. Peggy Lee got her start as the singer in Benny Goodman's Orchestra, and went on to record dozens of hits in the 40s, 50s, and 60s. Many of these hits she had a hand in writing, including songs like "It's A Good Day," "I Love Being Here With You," and "Fever." I'll explore Lee performing her own tunes on this program.

Peggy Lee was born Norma Egstrom in 1920 in the small town of Jamestown, North Dakota, and she developed a fondness for singing, writing tunes, and the radio at a young age. By the time she was a teenager, she had found a job singing at the local radio station, and eventually adopted the more marketable pseudonym Peggy Lee.

Her quest for fame brought her first to Los Angeles, and eventually to Chicago, where she got a job singing at the Ambassador Hotel West. It was there that she was discovered by the wife of bandleader Benny Goodman, who knew his husband's orchestra was looking for someone to replace singer Helen Forrest. Peggy Lee got the job. Her bluesy and sensuous voice would add a different dimension to Goodman's band, rocketing her to fame in 1943 with songs like "Blues In The Night" and "Why Don't You Do Right."

However, Lee didn't stay in Goodman's band for long, not because of her desire for bigger and better things, but because she was fraternizing with one band member in particular, guitarist Dave Barbour. Goodman had strict rules about romance within the group, so both Barbour and Lee left the group in 1943 to get married start a family.

Home life didn't suit Lee all that much. She was much more interested in singing and writing songs with her husband. One of the first tunes she wrote with Barbour was a song called "What More Can A Woman Do"Â in 1945, which was recorded by Sarah Vaughan, who was then justÂ an up-and-coming singer.

By 1946, Peggy Lee decided to take another shot at stardom, this time performing her own songs. She signed to Capitol Records, and quickly became one of the young record company's biggest selling artists. Her first hits were mostly songs that she co-wrote with her husband Barbour, including "It's A Good Day," "Everything Is Moving Too Fast," "I Don't Know Enough About You," and the Latin-flavored tune "Manana (Is Good Enough For Me)," one of the biggest-selling singles from 1948.Â

"I Don't Know Enough About You" became a signature song for Lee. She recorded it in the 1950s with Sy Oliver and his Orchestra, and again on her final album in 1993 when she was 72 years old. "Manana" was also the first of many "exotic" songs for Lee. She would go on to record several Latin-themed albums for Capitol in the 1960s, including Latin Ala Lee, and would even travel farther east when she wrote and performed "The Siamese Cat Song"Â in the 1955 Disney film Lady And The Tramp.

Lee and Barbour also likely contributed to the song "Don't Smoke In Bed,"Â which they recorded together in 1947. This was also famously recorded by Nina Simone a decade later.Â "Don't Smoke In Bed" is officially credited to songwriter Willard Robison, although Lee once claimed that she and Barbour contributed to much of the song's music and words. It's not clear exactly how much of Lee's claim is true, however-Lee, especially later in her life, was known to fabricate fanciful stories about herself.

What is known is that the lyrics of "Don't Smoke In Bed," all about a couple getting a divorce, would become very prescient for Barbour and Lee's own marriage. The two continued to write and record songs together for the remainder of the 1940s, becoming America's songwriting and performing sweethearts. However, it was Barbour's drinking, not smoking, that got out of hand. Their personal and professional partnership ended in 1951.

Right after Peggy Lee and Dave Barbour got a divorce, Lee moved from Capitol to Decca Records, where she would stay for about five years. While at the label, she put her songwriting mostly on hold.Â She found most of her success performing the songs of others, including the Rodgers and Hart tune "Lover," the Burke and Webster tune "Black Coffee," and the songs from the Irving Berlin film White Christmas, which she recorded alongside Bing Crosby in 1954.

Only a few of her own tunes were recorded for Decca, including the exotic song "Sans Souci,"Â which she wrote with Sonny Burke in 1952, and the tune "Take A Little Time To Smile,"Â written earlier with her ex-husband Dave Barbour, but not recorded until 1956.

During her Decca years, she also made an appearance in film ... in animated dog form. Peggy Lee was featured as the voice of (and inspiration for) the dog "Peg" from the Disney animated film Lady And The Tramp. She and Sonny Burke wrote all of the film's song too, including Peg's own song "He's A Tramp."

Return To Capitol and "Fever"

In 1957, Peggy Lee left Decca Records and made a return to Capitol Records, thanks in part to some convincing by her friend Frank Sinatra. Lee spent the next 15 years performing for Capitol. During this span, she would reinvent herself yet again as a more mysterious and seductive diva, a far cry from the chipper pop star singing "It's A Good Day" for Capitol in 1943.

One of Lee's first big hits for Capitol was a song she also had a hand in crafting. The song "Fever" had already been recorded as an R&B single by Little Willie John in 1956. But Lee updated it in 1958 as a sultry lounge song that sizzled as hot as the title implied. She also added a few extra verses to her version about some historical romances. The addition of "Captain Smith and Pocahontas" and "Romeo and Juliet" have since become part of the standard, although Lee was not originally credited as a co-songwriter.

Miss Peggy Lee recorded many more albums for Capitol Records in the 1950s and 60s.Â For most of her Capitol recordings, Lee contributed a song or two of her own to record. For instance, she co-wrote the title tracks to her LPsÂ Things Are Swingin'Â andÂ I Like Men!.

Lee also wrote or co-wroteÂ songs like "There'll Be Another Spring"Â recorded with pianist George Shearing on their albumÂ Beauty And The Beat (1959), and other album tracks like "Because I Love Him So"Â (fromÂ Pretty EyesÂ in 1960), "OlÃ©"Â (fromÂ OlÃ© ala LeeÂ in 1961), and "(I Love Your) Gypsy Heart"Â (fromÂ If You Go in 1961). She also co-wrote six of the blues songsÂ from her 1962 albumÂ Blues Cross CountryÂ made with Quincy Jones, including the songs "San Francisco Blues"Â and "Los Angeles Blues."

Lee also wrote a few of her singles on Capitol Records. Her original song "I Love Be Here With You"Â was a B-side to the little remembered single "Bucket Of Tears." But "I Love Being Here With You" soonÂ became a central part of her enchanting live sets in the 1960s.

In the 1960s, Peggy Lee's persona became more glamorous as the decade wore on, culminating in a brilliant performance of Leiber and Stoller's disillusioned song "Is That All There Is?" in 1969, which became the singer's last big hit. Throughout the 1960s, she continued to compose new songs, and revisit her older songs in her new style.

In 1963, she recorded her original "Where Can I Go Without You,"Â written a decade earlier, on her albumÂ Mink Jazz. That album also featured the original "Please Don't Rush Me."Â It was onÂ Mink Jazz where he new glamorous persona began to shine through in full force.

After Lee's unexpected hit with the song "Is That All There Is?" in 1969, her recording, performing, and songwriting became more sporadic. But she still had a few more songs up her sleeve. One of her last songs was a tune originally written by jazz pianist Marian McPartland in the 1960s called, believe it or not, "Afterglow."Â McPartland was a good friend of Peggy Lee's. In the late 1970s, McPartland decided to give this song to Lee to perform, and gave her free rein to write whatever words she wanted.

With Lee's new lyric, McPartland's "Afterglow" now went under the name "In The Days Of Our Love." This song may sound familiar to longtime Afterglow fans, because McPartland's solo version of was used as the theme song to this show for many years, mostly when Afterglow creator Dick Bishop (another friend of Marian McPartland's) hosted the program.