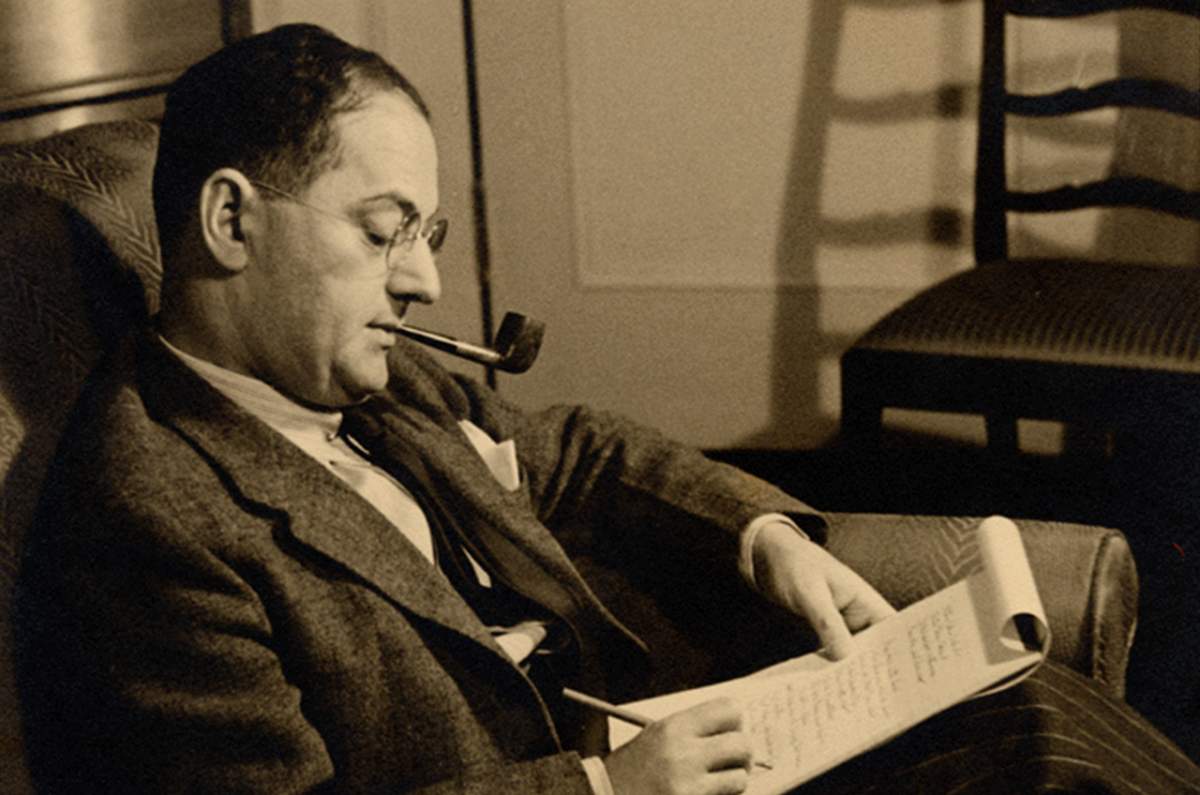 This week, we take a look at the songs of the Ira Gershwin songbook. One of the best wordsmiths of the 20th century, we have Ira to thank for the lyrics to "Embraceable You," "Someone To Watch Over Me," "Let's Call The Whole Thing Off," and "They Can't Take That Away From Me." He worked mostly with his younger brother, George Gershwin, but this hour, we'll also hear his collaborations with Jerome Kern, Harold Arlen, and Kurt Weill, sung by Frank Sinatra, Ella Fitzgerald, Johnny Hartman, and more.

Stories Behind Some Ira Gershwin Tunes

Let's Call The Whole Thing Off (1937, Shall We Dance?) The idea for this song first came to Ira Gershwin in grade school, when his English teacher told the following joke: an American and an Englishman were arguing over the pronunciation of a word. The American said "neether," while the Englishman said "nyther." To settle the dispute they turned to a bystander. "How would you pronounce this word" they asked. "Is it â€˜neether' or â€˜nyther'?" The man, an Irishman, responded "Nayther!" According to Gershwin in his 1959 annotated anthology-cum-autobiography Lyrics OnÂ SeveralÂ Occasions, this was apparently a dispute in Gershwin's own house: Ira was the "tomayto," and his wife was the "tomahto."

Someone To Watch Over Me (1926, Oh, Kay!) George had a tune in mind for this song, and for Ira, the title usually came before the lyrics. However Ira fell behind schedule, having been sent to the hospital with an emergency appendectomy. His friend, fellow lyricist Howard Dietz, came to visit Ira in the hospital in order to help him write the song. It was Dietz who suggested the title "Someone To Watch Over Me," and Ira's lyrics came quickly after that. It was originally designed as an up-tempo number, and only later slowed down to a ballad.

'S Wonderful (1927, Funny Face) In this brilliant lyric by Ira, he translates overwhelming passion into an inability to pronounce the entirety of several words: â€˜s wonderful, â€˜s marvelous, and so on. In one of the verses - performed by Ella Fitzgerald on her Gershwin songbook album - Gershwin chops up words like "passion," "fashion," and "emotion" into "pash," "fash" and "emosh," an idea he got from comedian Walter Catlett.

Embraceable You (1930, Girl Crazy)Â In 1930, Ira Gershwin scored his biggest hit to date with the musical Girl Crazy. It was the stage debut of Ethel Merman, with a production which included Ginger Rogers, and an all-star pit orchestra of Benny Goodman, Gene Krupa, Glenn Miller, Jack Teagarden, and Jimmy Dorsey. The songs were absolutely memorable, including "I Got Rhythm," "Embraceable You," and "But Not For Me." "Embraceable You" is excellent example of Gershwin's four-syllable rhymes: "embraceable you," "irreplaceable you," "silk-and-laceable you"; "Glorify love," "encore! If I love." Evidently, this was his father's favorite song of his, mostly because of the line "come to papa, come to papa, do."

It Ain't Necessarily SoÂ (1935,Â Porgy And Bess) ThisÂ is one of the few songs from Porgy and BessÂ that Ira and George Gershwin worked on alone, without a contribution fromÂ DuBoseÂ Heyward. George wrote a bluesy opening melody to the song, and Ira gave it the dummy title of "It Ain't Necessarily So," meaningless lyrics that just happened to fit that melody. But then Ira thought that maybe the character Sportin' Life in the show would use this phrase to startle some religious folks about their beliefs, and the song grew from there.

My Ship (1941, Lady In The Dark) Ira withdrew from songwriting for four years after his brother's death in 1937. He returned only at the insistence of composer Kurt Weill. Weill and Gershwin collaborated on the 1941 musical Lady In The Dark. This musical was later made into a film starring Ginger Rogers, and included songs like "My Ship" (which recurs throughout the musical), "The Saga of Jenny," and "Tchaikowsky," a hilarious patter-song for singer Danny Kaye, that mentioned the name of about 50 Russian composers. Included in this list is Gershwin's friend Vernon Duke (real name was Vladimir Dukelsky), who he worked with five years earlier on the song "I Can't Get Started."

Long Ago (And Far Away)Â (1944, Cover Girl)Â In 1944, Ira Gershwin worked on the lyrics to the Rita Hayworth film Cover Girl with songwriter Jerome Kern. The lyrics to the song "Long Ago (And Far Away)" from the film plagued Gershwin, who wrote several drafts of the song with no luck. He ran out of time and was forced to give the producer a draft he was very unhappy with. Those draft lyrics ended up becoming Gershwin's biggest moneymaker in sheet music sales.

The Man That Got Away (1954, A Star Is Born) This came from the 1954 filmÂ A Star Is Born, a film he worked on with Harold Arlen, and performed by Judy Garland.Â Frank Sinatra wanted to record the tune that same year, and it was Ira himself who wrote the gender-swapped version of this song "The Gal That Got Away" at Frank Sinatra's request. Most of the song was as simple as a pronoun change, but the final lines originally read "Ever since this world began, There is nothing sadder than a one-man woman looking for the man that got away." For Frank, Ira changed it to "there is nothing sadder than a lost, lost loser looking for the gal that got away," which had some delicate alliteration that Frank seemed to like.