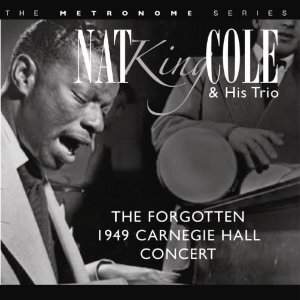 In 1949 the Nat King Cole Trio was at the height of its popularity, and Cole was on the verge of launching a solo career. Late that year Cole played at Carnegie Hall, as part of a double-bill tour with Woody Herman's big band. He'd played at Carnegie Hall several other times, both before and after this November 1949 date, but until now there were thought to be no recordings of him at Carnegie whatsoever-and this particular concert, which had not been covered by the New York press or the jazz journals, was barely known even to devoted Cole fans and researchers. But David Lennick, a Canadian engineer, producer and historian, turned up some acetates of the concert, and it's now out as a CD on Hep Records.

This was an interesting period in Nat King Cole's career-he'd actually added a bongo player (Jack Costanzo) to enhance the rhythms of the bop and Latin-influenced tunes that the trio was including in their repertoire. But they were still doing a lot of vocal tunes, playing the hits they'd had throughout the 1940s, and Cole was moving more and more towards becoming a solo act who sang more pop-oriented material.

We'll hear the trio doing their hit "Sweet Lorraine," as well as "Laugh Cool Clown," their hip take on an Italian opera number; Cole's rendition of the newly-popularized Billy Strayhorn song "Lush Life"; a mashup of "How High the Moon" with the Herman orchestra on deck to play along; and aforementioned bop and Latin-tinged songs such as "Cuba Libre" and "Bop Kick."

Other Music on the Program

Miles Davis rarely backed singers, especially after 1950, but we'll hear two examples of when he did--one early recording with Sarah Vaughan, and one from late in Miles' career, with a singer he championed, Shirley Horn.

We'll also hear two little-known Artie Shaw sides, done in the early 1950s when he was making commercial sides for Decca, taking the train into New York City from his rural farm and laying down clarinet solos without much thought or care, backing bland pop singers. These sides with singer June Hutton and an under-the-radar version of the Gramercy 5 were an exception that he later spoke well of to his bio-discographer Vladimir Simosko. June Hutton was the younger sister of the female swing-era bandleader Ina Ray Hutton; Shaw said of her, "Junie was good; she could sing. I enjoyed those records. I thought Junie was marvelous."