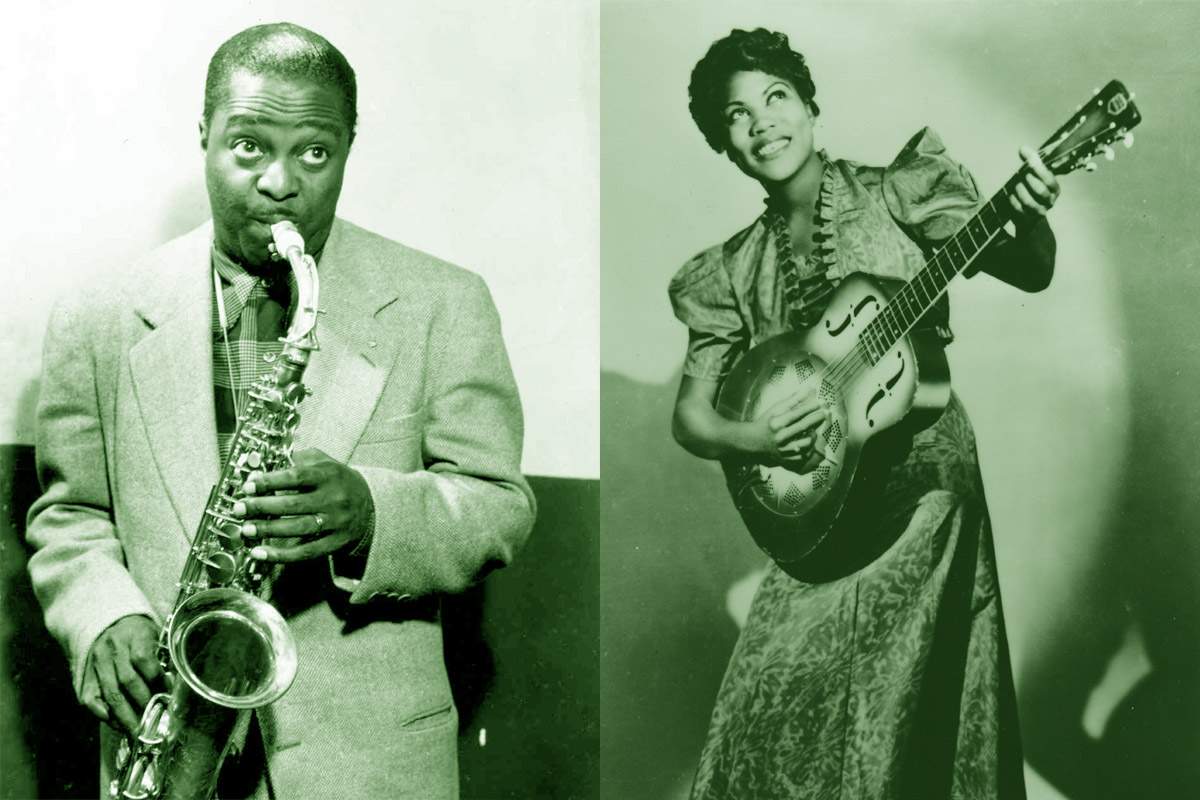 Some artistsÂ fall through the cracks of music history, and this week on Afterglow, we're looking at two such artists: the King of the Jukebox Louis Jordan and the Godmother of Rock and Roll Sister Rosetta Tharpe. Born just 10 miles apart from each other in rural Arkansas, Jordan was a jump blues cad while Tharpe was a gospel queen. And in the 1940s, they each played their part in setting up the foundation for rock and roll.

King of the Jukebox

Louis Jordan was born in Brinkley, Arkansas in 1908. Seven years later and 10 miles down the road, Sister Rosetta Tharpe was born. Both artists had a tremendous influence on early rock and roll artists-although many rock historians (and jazz historians for that matter) tend to ignore their output. But listening to their music is like witnessing musical evolution in action.

Rock fans will clearly hear early Ray Charles or Bill Haley in the music Louis Jordan (both were produced by legendary producer Milt Gabler), whereas jazz fans will clearly hear the influences of Chick Webb and Cab Calloway in his music. Jordan got his start playing in travelling minstrel show before being picked up as a saxophonist with Chick Webb and his orchestra. While Jordan was a mediocre saxophone player, he was a great singer and an even bigger personality.

In the late 1930s, Jordan branched out on his own to form the Tympany Five. The group shied away from the cerebral bebop of Parker and Gillespie that was also emerging at this time, and opted for a peppier style of R&B eventually called jump blues. Over the next decade, Jordan became "The King of Jukebox," becoming a huge sensation to both black and white audiences, with such songs as "Caldonia" and "Choo Choo Ch'Boogie."

Louis Jordan and His Tympany Five with "Caldonia" live in 1946

The Godmother of Rock and Roll

Like Jordan, Tharpe stands at this curious nexus between jazz, R&B, and rock and roll. However, Tharpe added two more things to her arsenal: one, Tharpe was primarily a gospel singer, a style that would later influence much of the R&B of the 1950s and beyond, with singers like Sam Cooke, Ray Charles, and Aretha Franklin. And two, Tharpe played guitar, an instrument that would surpass Jordan's saxophone when rock and roll emerged in the 1950s, influencing artists like Chuck Berry and B.B. King.

Tharpe began her musical career singing with her mother, a travelling evangelist in the Church of God in Christ. When she moved to New York, she quickly became a star at the Cotton Club and other big venues, briefly abandoning her gospel roots to perform secular music. In the fall of 1938 at age 23, she recorded her very first sides. The record company was Decca-the same company who would just 2 months later produce the very first recording of Louis Jordan and his Tympany Five. And Tharpe was Decca's very first gospel act. Soon after, she joined the swing band of Lucky Millinder, and that's where Tharpe began to transform her gospel style into secular music, almost over a decade before Ray Charles or Sam Cooke.

Although these two artists are uniquely situated in this odd juncture of jazz, R&B, soul, and gospel, and each had profound influence on early rock and roll, in terms of content, Louis Jordan and Sister Rosetta Tharpe could not be more different. Jordan was a bit of a cad, his songs extolling his life of sin. Songs likeÂ "Whiskey Do Your Stuff"*** or "Never Let You Left Hand Know What Your Right Hand's Doin'" are allÂ about drinking and cheating, which Jordan performs with his characteristic smile on his face. For the 1940s, it was fairlyÂ risque.

Tharpe's gospel music on the other hand, was about the exact opposite kind of lifestyle. After leaving Lucky Milliner's ensemble, most of her music had religious themes, like "How Far Am I From God," "Down By The Riverside" or "Jericho."

The two artists did perform together only once. In 1943, both artists were featured guests on the Jubilee Radio broadcast-a broadcast of mostly African-American artists distributed by the Armed Forces Radio Services. To close off the broadcast, Tharpe performed her signature song "This Train," backed by Louis Jordan and his Tympany Five.

***If it wasn't clear already how connected Jordan was to the early days of rock and roll, take this anecdote. The song "Whiskey Do Your Stuff" was written by a man named "Shifty Henri." If that name sounds familiar, it's because songwriters Jerry Leiber and Mike Stoller later used this name as one of the fictional characters in the 1957 Elvis Presley song "Jailhouse Rock."