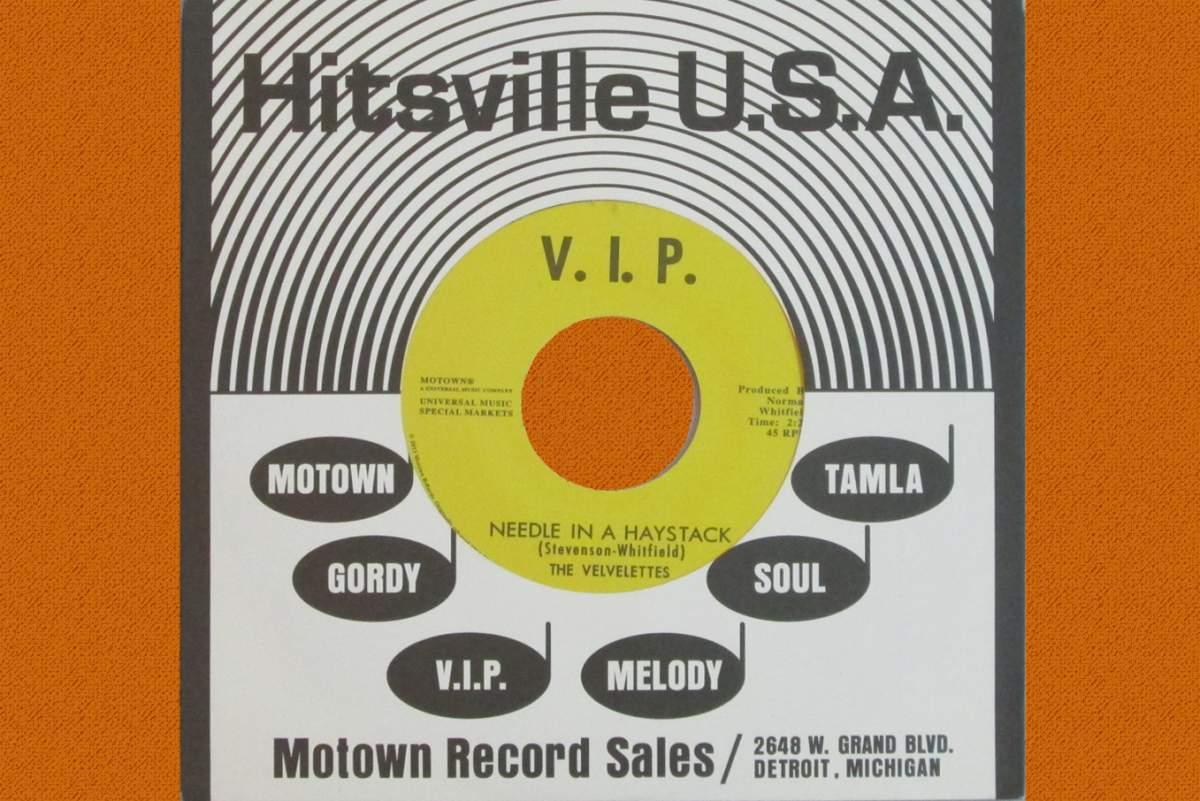 Smokey Robinson, Marvin Gaye, The Temptations, and The Supremes are just a few of the artists you will NOT hear this week on the show. Yes, we'reÂ looking at Motown this week, but exploring some of the artists who fell through the cracks at Hitsville, U.S.A, artists like The Elgins, The Velvelettes, Gino Parks, Brenda Holloway, and more.

The story of Motown records is a familiar one. In 1959, Detroit-based songwriter and entrepreneur Berry Gordy used an $800 loan from his family to create the Tamla record label. This was the beginning of the empire which eventually included several labels, a publishing company, a talent agency, and a studio known as Hitsville U.S.A., all incorporated under the Motown Record Corporation. Gordy fostered talent locally in Detroit, and eventually around the country, creating a soulful black sound that was polished enough to appeal to the fickle white audience.

Barrett Strong's "Money (That's What I Want)" was Motown's first hit, and The Miracles' "Shop Around" was their first number one record. But the first recorded single for Motown came from an artist who is mostly forgotten, except by the biggest soul fans. Detroit's-own Marv Johnson recorded the song "Come To Me" for the Tamla label in 1959, and it was later distributed to United Artists when it became a minor national hit.

The names Holland-Dozier-Holland became well known in Motown history because this songwriting and producing team were behind many of the biggest hits for Motown, including The Supremes' "Where Did Our Love Go" and "You Keep Me Hangin' On," Martha and the Vandellas "Heat Wave," and the Four Tops "I Can't Help Myself (Sugar Pie, Honey Bunch)." However, what's lesser known is that two of them members of this group - Lamont Dozier and Eddie Holland - each tried their hands (somewhat unsuccessfully) as solo artists in Motown's early years, recording lesser-known songs like "Dearest One" and "Jamie."

Motown's most successful girl group was of course The Supremes, but Martha Reeves and the Vandellas, Gladys Knight and the Pips, and the Marvelettes have also cemented their legacy as Motown success stories. The also-rans in the Motown girl group cavalcade included artists like The Velvelettes and The Andantes.

The Velvelettes were a group of sisters and cousins from Kalamazoo, Michigan who, while earning a few minor hits in the 60s, never recorded a full album for Motown or any of its subsidiary labels. The Andantes on the other hand recorded just a handful of songs on their own, but they were heard as the uncredited background singers on hits like Mary Wells "My Guy" and the Four Tops "Baby I Need Your Loving."

In addition to the girl groups, Motown also had quite the lineup of female solo artists. Mary Wells was Motown's first big solo female star. But when she left the label in 1964, after earning less money than expected from her big hit "My Guy" (a common complaint about Berry Gordy's business practices), it left a gap. Kim Weston and Tammi Terrell each had some success, mostly when paired with Marvin Gaye, but it was Diana Ross eventually took over the role of Motown's solo star. However, other lesser known solo female singers have been championed by Motown over the years as well, including Mable John, Carolyn Crawford, Brenda Holloway, and Chris Clark.

Mable John was the first female singer to record with Motown, and the older sister to rock and roll star Little Willie John. She was being groomed by Gordy as an artist before Motown was even founded: he helped her open for Billie Holiday in Detroit in the mid 50s. But her first single for Tamla, "Who Wouldn't Love A Man Like That," was a flop. Four years later in 1963, Motown gave John another shot at recording the song, this time with a precocious 13-year-old Little Stevie Wonder producing.

Carolyn CrawfordÂ joined the label as a teenager after winning a radio talent contest. SheÂ had aÂ minor national hit in 1965 with "My Smile Is Just A Frown (Turned Upside Down)," a song co-written by Smokey Robinson.

Brenda HollowayÂ came as close to the limelight as any of the also-rans in Motown's history. Â She was Motown's first big find out in their West Coast offices in Los Angeles. Admired by the Motown elite as much for her looks as for her voice, Holloway scored a number of minor hits in the mid-1960s, before leaving show business out of frustration at the age of 22. She's remembered mostly today for co-writing and performing the "You Make Me So Very Happy," which the jazz-rock group Blood, Sweat, and Tears turned into a Gold record in 1969. Her biggest hit, which is somewhat memorable today, was almost ignored by Gordy, because he generally hated songs with a Â¾ waltz time signature. But the song "Every Little Bit Hurts" became a top 40 single, and remained on the charts for 10 weeks in 1964.

Chris Clark was one of the very few white artists who recorded for Motown. Clark, a 6-foot-tall blond from California had a soulful voice that fit right in at Motown, although she looked nothing like anyone else on the payroll. Before Gordy gave her a shot behind the microphone, she worked in the front office as the receptionist (and even reportedly had a brief relationship with the boss). Clark released a few singles and two albums for Motown's various labels, including her minor R&B hit "Love's Gone Bad."

Marvin Gaye was undoubtedly Motown's big male star, but others flew under the radar as well. Gino Parks was a talented singer from Motown's early year, a blues shouter and Detroit native who left Motown on his own accord around 1963 to quietly get a job working for Chrysler. Shorty Long, who very nearly reached lasting fame with hits like "Here Comes the Judge" and "Devil With a Blue Dress" (a song later made famous by Mitch Ryder and the Detroit Wheels). However, Long's life was tragically cut short in 1969 when he died of an accidental drowning.

Chris Clark wasn't the only white artist to move through Motown's ranks, nor was she the first. The first all-white group for Motown was The Valadiers, the Detroit-based doo wop group that Gordy initially thought was comprised of African-American singers when first heard them. Their biggest hit was the humorous anti-war song "Greetings (This is Uncle Sam)," sung as a heartbroken ballad. Another lesser-known Motown group, the all-black group The Monitors, later recorded this song and had a minor hit with it in 1966.

Another Motown outfit that never quite took off in the same way as The Miracles, Supremes, or Four Tops, was The Elgins. Tracing the Elgins' history is a bit tricky: two of the members, Johnny Dawson and Robert Fleming, were originally part of the Motown group The Downbeats (and prior to Motown, sang with The Sensations and The Five Emeralds). But it was only after they added the female solo singer Saundra Mallett to their ranks when they became the Elgins. Mallett was having trouble finding success on her own, and even recorded a Motown single backed by the Vandellas, before Martha Reeves took over as the lead singer of that group. To make matters more complicated, after The Elgins were founded, another Motown group also wanted to use this name-named after the luxury Elgin watches. That other group was forced to change their name, becoming The Temptations.

TheÂ Elgins' only two minor hits, "Darling Baby" and "Heaven Must Have Sent You," were both produced by Holland-Dozier-Holland.