Get Your Kicks With Bobby Troup 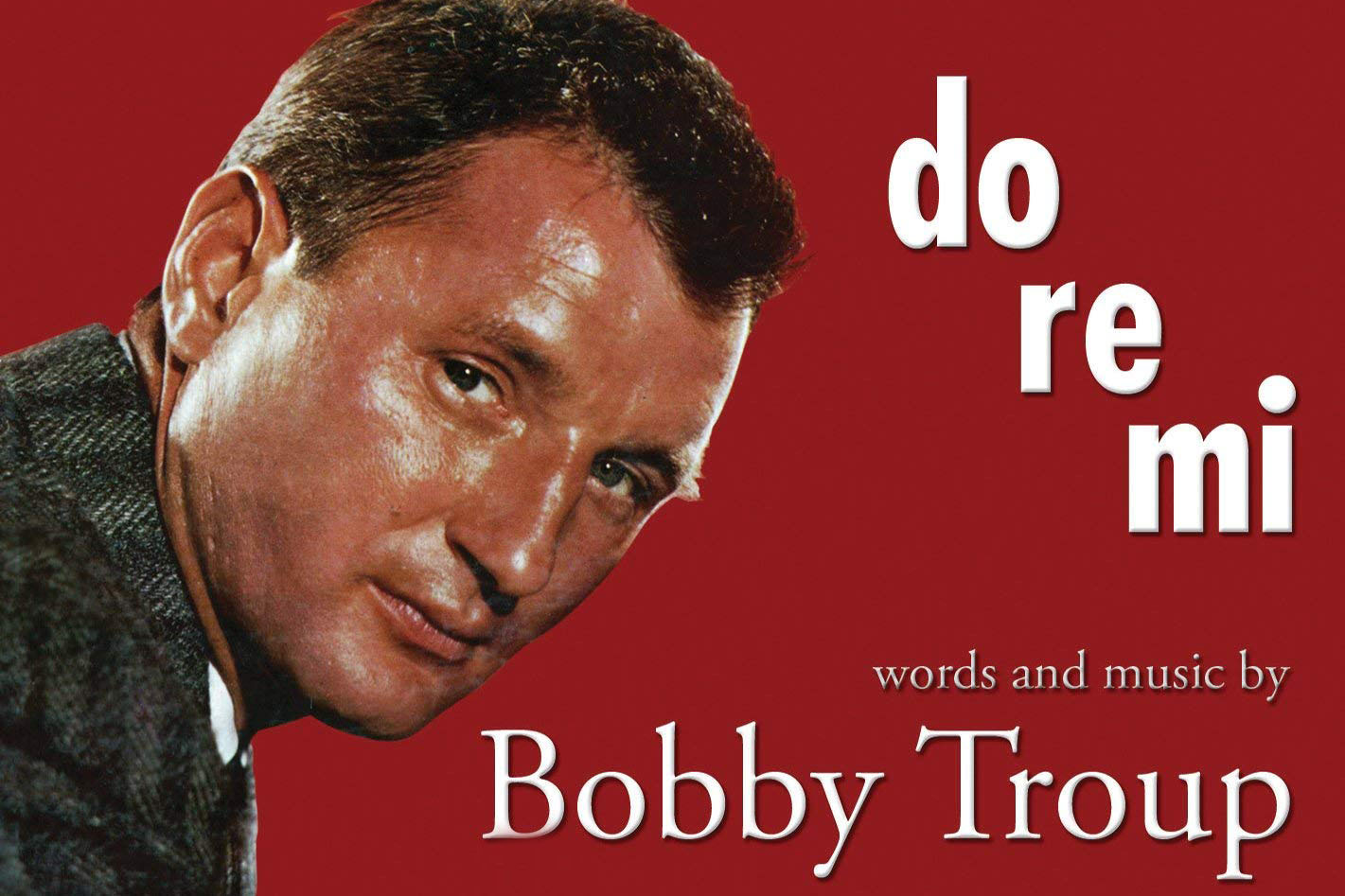 Bobby Troup was a true Renaissance man of the 20th century: a singer, an actor, a jazz pianist, a skilled songwriter, and an all-around kind gentleman. This week on the program, in honor of Troup’s centennial, I’ll look back on the musical side of his career, and the songs he wrote, including “(Get Your Kicks On) Route 66,” “Baby, Baby All The Time,” and “Just The Way I Am.” We’ll hear them performed by Troup himself, his equally famous wife Julie London, and other well-known singers like Tony Bennett and Nat King Cole.

[This episode originally aired on October 12, 2018, in celebration of Troup's centennial that year]

The Mask And Wig Club

Bobby Troup was born in Harrisburg, Pennsylvania on October 18, 1918, the son of a music store owner. He ended up attending the University of Pennsylvania for college, and it was while in college that he found his first musical success of his own. He joined the long-established musical comedy troupe known as The Mask And Wig Club, and for one of their productions wrote the humorous song “Daddy.” “Daddy” became a minor hit on the U. Penn campus. When Sammy Kaye and His Orchestra were performing in Philadelphia, they encountered the song, and eventually recorded their own version later that year.

“Daddy” became one of the biggest selling singles of 1941 and established Bobby Troup as a clever, playful songwriter in the business, all while he was still in college. He wrote another single called "Snootie Little Cutie" around this time too, recorded by the Tommy Dorsey Orchestra with Frank Sinatra, Connie Haynes, and the Pied Pipers.

After college, Bobby Troup enlisted in the Marines Corps and like many men in that era, served briefly in World War II. After the war, he made the decision to become a full time songwriter, but knew that to become successful, he had to move to either New York or Los Angeles. He chose LA, and he and his wife at the time decided to pack up the car and motor west.

As they planned out their route, Troup’s wife suggested they take Route 66, that highway that winds from Chicago to LA, saying to him, quote “Get Your Kicks on Route 66.” Inspired by that clever turn of phrase, Troup turned his journey west into a song. When he arrived in LA, he happened to meet Nat King Cole, one of the most notable west coast jazz musicians and the leader of the King Cole Trio.

He brought “Route 66” and another song he’d written called “Baby, Baby All The Time” to Cole, and within the year, The King Cole Trio has recorded both songs, making them both into enduring hits.

“Route 66” became Bobby Troup’s meal ticket, and throughout the rest of the 1940s, 50s, and 60s, he continued to write songs, both as a primary songwriter and a lyricist. Around this time, Troup also made a name for himself as not just a songwriter, but also a jazz pianist and singer. His easy-going style was modeled after Nat King Cole’s, but Troup was nowhere near as talented (or successful) as the King Cole Trio.

Nevertheless, he had a minor career in the 1950s performing jazz standards and songs that he himself wrote. He recorded about a dozen albums in the late 1950s, including a self-titled debut on Capitol in 1955, an album of Johnny Mercer tunes for Bethlehem Records in 1956, and an album of Troup originals called Do Re Mi for Liberty Records also in 1956.

One of the few Bobby Troup originals that had any kind of staying power with Troup himself on vocals was a tune he wrote back in 1946 called “The Three Bears.” It was inspired by Goldilocks and the Three Bears, a story he had read over and over again to his daughter when she was a kid. Troup’s daughter never liked her father’s voice, not even when he sang his jazzed up version of her favorite children’s story. But when he recorded it later on, his cool, hipster style was perfect for re-telling the Goldilocks story with a bit of swing.

Bobby Troup had quite the career: singer, pianist, songwriter, actor. But after 1959, he mostly lived in the shadows of his arguably more famous wife, the torch singer Julie London. London met Troup while he was performing at a nightclub in LA. She had recently divorced Dragnet actor Jack Webb around that time, and wasn’t a singer herself. Later that night at a party, Troup encouraged London to sing, and was blown away at her smoky, seductive voice. He helped promote her career, which began shortly after in 1955 with her iconic performance of the song “Cry Me A River.”

Troup ended up becoming an integral part of London’s career, producing her albums and writing songs for her. The two were married by 1959. In the 1970s, they even starred together on the television series Emergency! produced by her ex-husband Jack Webb (Webb, London, and Troup had remained close).

He even wrote music for her. His 1958 album for Liberty Records was titled Here’s To My Lady, a tribute to London. He recorded the album with Russ Garcia and his Orchestra, and the final song on the album is an original simply titled "Julie Is Her Name."

Bobby Troup’s catchy songs and playful lyrics caught on with many more singers throughout the 1950s and 60s, besides his wife. Songs like "Just The Way I Am," "The Meaning Of The Blues" (written with lyricist Leah Worth), "You're Looking At Me," and "Girl Talk" (written with composer Neal Hefti) were sung by artists like June Christy, Carmen McRae, Nat King Cole and Tony Bennett.

Bobby Troup also had a connection to the budding world of rock 'n' roll in the 1950s. He wrote much the music for the 1956 Jayne Mansfield film The Girl Can’t Help It, including the film’s title track. This film musical also featured a number of early rock and roll artists performing on screen like Fats Domino, Gene Vincent, Eddie Cochran, The Platters, and Little Richard. Little Richard sang Troup's song "The Girl Can't Help It" in the film, which became an influential early rock 'n' roll song. The film’s prominent use of rock 'n' roll (some of it written by Troup) had a profound impact on the next generation of rock musicians, including a teenage John Lennon and Paul McCartney from Liverpool, who each picked up guitars shortly after watching the film.

Troup was also the composer of the song "Their Hearts Were Full Of Spring," which likewise had an important early rock 'n' roll connection. In 1961, it was performed with an original arrangement by the vocal group The Four Freshmen. This arrangement is notable because it was a favorite song of a young Brian Wilson. Wilson even transcribed this arrangement for his brothers to sing, and its style became the foundation of the vocal style for Wilson’s new group The Beach Boys.