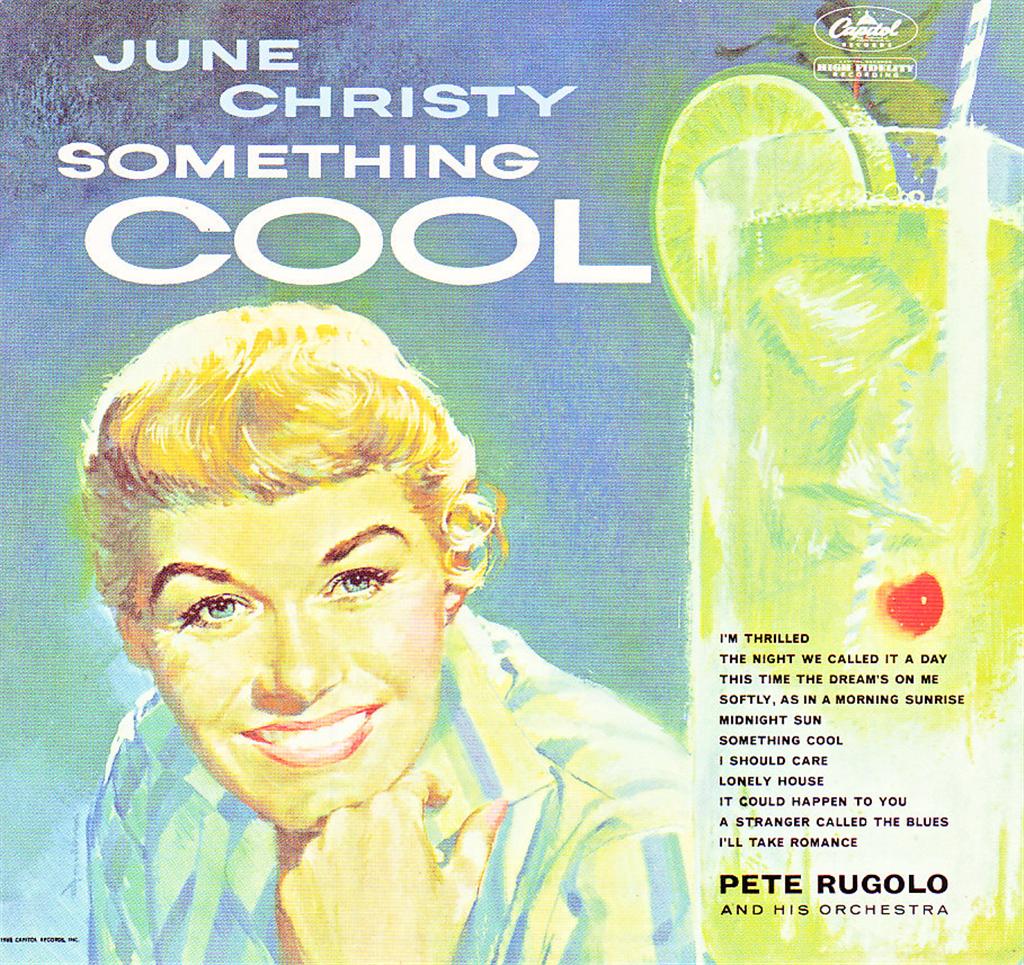 After making a name for herself fronting Stan Kenton's Orchestra in the late 1940s, June Christy broke out on her own and released one of the quintessential cool jazz vocal albums: Something Cool from 1954. On this show, we'll feature tracks from both the original mono version and the re-issued stereo version of this classic album by the smoky-voiced Christy. Also, we'll listen to some songs by two other artists who were reinventing themselves in the early album era of the mid-1950s: Mel TormÃ© and Ella Fitzgerald.

June Christy, born Shirley Luster in Springfield, Illinois in 1925, got her start singing in Stan Kenton's orchestra, replacing Anita O'Day after O'Day's departure from the group in 1945. Christy and O'Day are two singers cut from the same cloth: both smoky-voiced mid-westerners, always a little out-of-tune, and incredibly smart and confident behind the microphone. Both also allied themselves with "The Cool School" of singers, a certain laid-back jazz style from the West Coast.

After leaving Kenton's group in the early 1950s, Christy signed to Capitol Records. As a solo artist, she wanted to escape the shadow of Kenton, and her first solo album Something Cool helped to establish her new identity. And as critic Will Friedwald has pointed out, certainly the album's title gave the listener a sense of what to expect.

The songs on the record were not your typical group of standards. Simple songs were eschewed for more dramatic story-telling. The lead-off and title track from the album, written by Billy Barnes, is a gorgeous soliloquy that features Christy at her dramatic peak. For the song "Something Cool," imagine someone like Blanche DuBois spinning a yarn in a barroom late one evening to a male suitor. It also featured a rare aria called "Lonely House," a mysterious and melancholic ballad written by Kurt Weill and Langston Hughes.

Something Cool was released just as the album format was gaining traction. Much like Frank Sinatra's first two albums for Capitol from the same time - Songs for Young Lovers and Swing Easy - the record was released in the 10" format. Capitol soon realized that the 10" record was likely to be eclipsed by the 12" record, so in 1955, Capitol sent Christy back into the studio to cut four more tracks to be added to a longer 12" version of Something Cool. These tracks included the Harold Arlen and Johnny Mercer tune "This Time the Dream's On Me," and the Sidney Lippman and Sylvia Dee tune "I'm Thrilled."

The album became a huge hit for Christy in 1954, and by the time the decade was over, she recorded nine more albums. In 1960, six years after the original, Christy and Capitol records gave Something Cool new life yet again by recording it in the new fad of stereo recording. The new stereo mix added a bright new sheen to Pete Rugolo's orchestrations, and it also featured Christy with six years of maturity added to her voice.

Mel TormÃ© at Bethlehem and Ella Fitzgerald at Verve

Many jazz artists were going through career transformations around the same time, in this era when the long-play album format was becoming bigger in the jazz world. Among those was Mel TormÃ©, who was the same age as Christy.

Instead of using Capitol records as the place for a big break, as Christy did, TormÃ© was turning away from Capitol. Eager to shed his "velvet fog" crooner image, TormÃ© left Capitol in 1955 for Bethlehem Records, an up-and-coming pure jazz label. It was seen as a bit of a risky move at the time, but TormÃ© brought along some of the finest arrangers with him to Bethlehem, including Andre Previn, Russ Garcia, and Marty Paich.Â These early Bethlehem records, includingÂ It's a Blue World andÂ Mel TormÃ© Sings Fred Astaire marked a turning point in TormÃ©'s career towards a bonafide jazz singer.

Likewise, Ella Fitzgerald went through a career transformation at the same time, influenced no doubt by the emergence of the long-playing record.

In 1956, Ella Fitzgerald was convinced by producer Norman Granz to leave Decca Records for Verve, his brand new jazz label. In fact, Granz created Verve Records expressly with Fitzgerald in mind: his vision was a Songbook Series, with Fitzgerald performing the songs of writers like Cole Porter, Irving Berlin, Harold Arlen, and the rest of the usual suspects, all on new long-playing 12" records.

Ella Fitzgerald Sings the Cole Porter Songbook from 1956 was a double-disc that featured many of the same West Coast musicians that performed with both Christy and TormÃ©. The album was not only the first record in her eventual seven-record Songbook Series, it was also the first one ever recorded for the entire Verve label.