The Blues Of Joe Williams 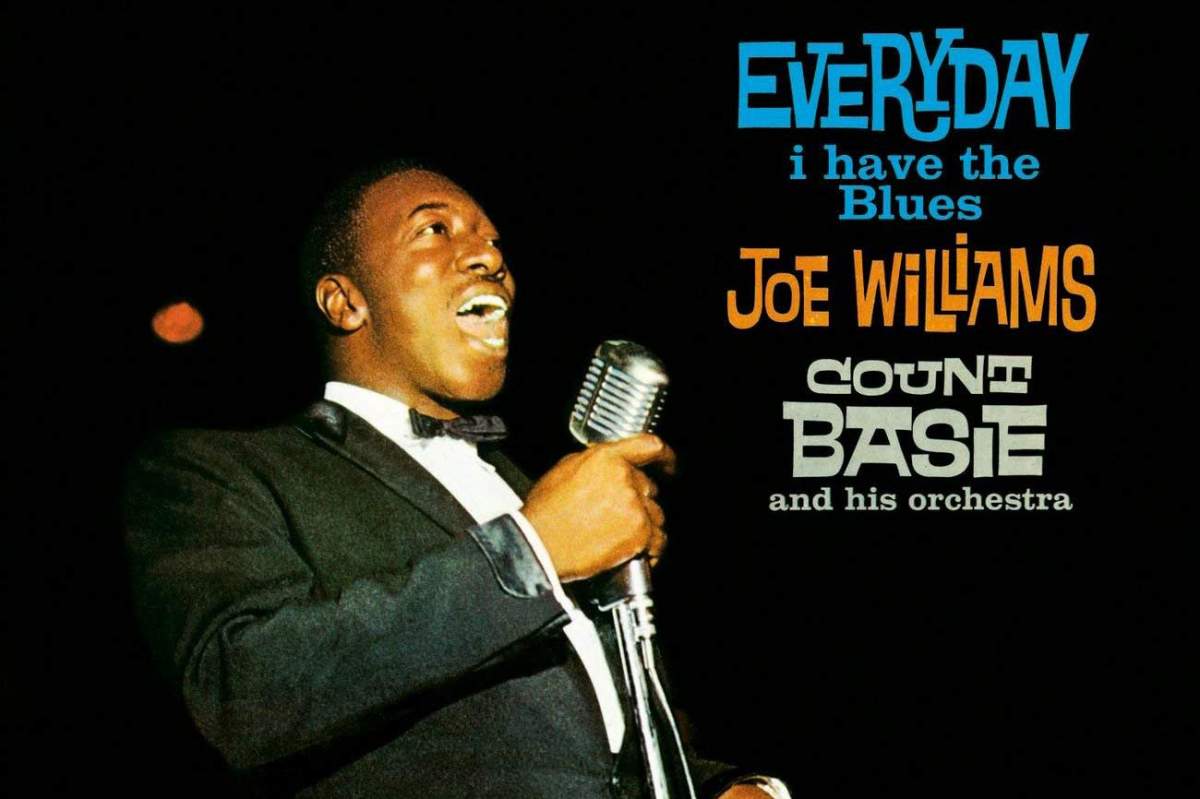 This week on the program, I'm celebrating the life and career of singer Joe Williams. Williams was a deep-voiced blues shouter who got his start singing with Count Basie in the 1950s when he was already 35 years old. In the 1960s and beyond, Williams became equally known for his tender ballad singing, and could switch effortlessly between the two genres. I'll play for you some of his best remembered works, including "Everyday I Have The Blues."

Joe Williams was born Joseph Goreed in Cordele, Georgia in 1918. Like many African Americans in the south around this time, young Joe's mother brought him to Chicago for a better life, as part of the Great Migration.

His first singing was done in the church. But by his early twenties he was getting some part time work in Chicago as a balladeer under the name "Joe Williams" alongside the bands of Lionel Hampton, Coleman Hawkins, and others.

There's not much evidence of Williams' career during most of the 1940s and early 1950s. Only a few recordings exist, his first being the boogie woogie song "Roll Em Pete," which he recorded with Albert Ammons in Milwaukee in 1943. "Roll Em Pete" later became a staple of Joe Williams' repertoire years later. His commercial debut came in 1946 with Decca Records alongside Andy Kirk and His Clouds of Joy, singing the novelty record "Louella."

But besides these recordings, Williams didn't have much to show for all of his hard work. You can basically count the number of Joe Williams records for the first decade of his musical career on one hand.

With Count Basie and His Orchestra

Then in the early 1950s, he discovered a Memphis Slim blues song called "Every Day I Have The Blues," and incorporated it into his repertoire. He didn't consider himself a blues singer, but everyone who heard him sing this song in Chicago thought otherwise.

On the strength of this song alone, Joe Williams was hired by one of the most famous bandleaders in the nation, Count Basie. At the age of 35, Williams had finally made it. In 1955, he recorded "Every Day I Have The Blues" with Basie and scored a best-selling single. The song put Basie back on top and made Joe Williams the new blues singer to watch.

Their first album together was Count Basie Swings/Joe Williams Sings, released on Verve records. That album was where Williams emerged as a true artist, fully formed at the relatively old age of 35. And many of the songs he recorded on this first album became part of the Joe Williams repertory for the remainder of his 40 year career.

When Williams joined Basie's band in 1955, it marked a renewed success for the Orchestra. Basie soon called Williams his "number one son." Williams and Basie recorded several more albums together for Verve Records in the late 1950s. One standout record had Williams teamed up with vocal group Lambert, Hendricks and Ross, performing some of Basie's signature songs.

On another record called One O'Clock Jump from 1957, Williams is featured alongside the most famous Verve vocalist Ella Fitzgerald. Williams' sonorous baritone blends well with Ella's light and airy vocals. In 1959, after the two made a switch to Roulette Records, he was featured on Basie's Roulette album called Memories Ad-Lib, which featured Basie on the organ performing with a small ensemble. He eventually left Basie's band in 1961 to pursue a solo career, but not before they recorded some exciting live albums together, including a set at the Newport Jazz Festival

When Joe Williams first decided to make his way solo, he focused mostly on the music that he wanted to sing all along: ballads. For as excellent as Williams was as a blues shouter, he was arguably more adept at crooning a delicate ballad.

His first solo effort outside of the Basie fold was the 1958 Roulette album called A Man Ain't Supposed To Cry, which features a sullen Joe Williams, harshly lit from above on the cover.

Joe Williams continued to record for Roulette Records for the next five years, and during this time never strayed too far away from the Count Basie orbit. In 1961, after he had fully left the Basie Orchestra, he recorded an album called Together featuring Basie's trumpeter Harry "Sweets" Edison.

In 1963, Joe Williams left Roulette Records as well as his association with Count Basie. He would on occasion make a guest appearance with Basie over the next several years, but for the most part, he was a solo artist. He signed to RCA Victor in 1963, recording a series of albums that feature Williams, now in his 40s, with an even more mature jazz sound. One of these RCA albums from 1966 was called The Exciting Joe Williams. Years later, Williams would call this his favorite album of his, and the song "On The Sunny Side Of Street" his favorite song on the album.

In the late 1960s, as Williams approached his 50s, he continued to record, but you could hardly tell the age of voice. He recorded an album with the Thad Jones/Mel Lewis Orchestra that showed off some of his scat singing talent. And in 1971, he recorded an album with pianist George Shearing called The Heart and Soul of Joe Williams and George Shearing, an album featuring all songs with "heart" or "soul" in the title.

In the 1980s, he continued recording jazz at a high level, including making guest appearances with a re-formed Count Basie Orchestra (sans Basie) and recording several albums for the re-formed Verve label, including a live set at Vine Street.

Joe Williams passed away in 1999 at age 80, leaving behind him a consistent career that spanned five decades, even though he was already basically an old man (age 35) when he got his first big break. In the 1990s, Joe Williams recorded his final albums for the Telarc label. This includes an album of spirituals in 1995 and a live album with Count Basie's Orchestra, now under the direction of saxophonist Frank Foster. On that live album with Basie recorded in Detroit, Williams sang many of his old standards with the group, including the boogie woogie song "Roll 'Em Pete," the song that he first recorded 40 years earlier before he was famous.